Freivalds' presentation at the Mobile World Congress 2017 in Barcelona. 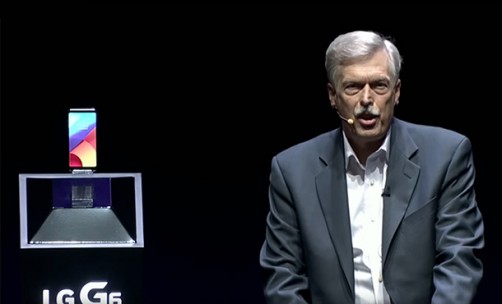 Andris Freivalds, Lucas Professor in the Harold and Inge Marcus Department of Industrial and Manufacturing Engineering, provided his team's research findings on the comfort and usability of the LG G6 at the launch of the smartphone at the Mobile World Congress 2017 in February.

Newswise — UNIVERSITY PARK, Pa. – Andris Freivalds, a world-renowned expert in the field of human factors and ergonomics, helped lead a team of researchers contracted by LG during the testing of its latest smartphone release.

The LG G6 was launched at the Mobile World Congress 2017 in Barcelona in February. Freivalds was on-hand to explain the team’s research contributions on two of the most important factors consumers look at when choosing smartphones: comfort and usability.

Freivalds, Lucas Professor in the Harold and Inge Marcus Department of Industrial and Manufacturing Engineering, and industrial engineering doctoral candidate Kiseok Sung traveled to Korea in January to assist researchers from Yonsei University in Seoul, Korea, led by Professor Yong Gu Ji, on the project.

The team studied how people interact with smartphones by looking at the ergonomic factors of smartphone use, and made suggestions to LG before the G6 went on the market.

“Smartphone manufacturers tend to only emphasize new technologies and features; they simply think their stuff is cool,” said Freivalds. “However, as an ergonomist, I think these phones have some very basic and important principles beyond the new bells and whistles, so we checked the LG G6 from the eyes of ergonomics professionals.”

A stable grip and easy touch are very important characteristics in our current mobile lifestyle, explained Freivalds, and most users prefer one-handed operation of the device when they are multitasking. Through the study, researchers found the ideal width of a smartphone to be between 67-72 millimeters (mm).

Second, in order to accommodate to a large screen, smartphone manufacturers are tempted to sacrifice the bottom bezel; however, the bottom bezel is important for handgrip and easy touch control.

“A bezel adds structural integrity to a smartphone and protects it from accidental bumps and drops,” said Freivalds.

The researchers found the ideal bottom bezel size for one-handed use is at least 7.5 mm. The bottom bezel on the G6 is 10.5 mm, which falls into the suitable range.

The next characteristic is screen size ratio and researchers found users more satisfied with the 18:9 full vision ratio on the LG G6 for watching multimedia. This showed about a 13 percent higher satisfaction rate than a screen with a 16:9 ratio, said Freivalds.

Finally, researchers compared a flat display to an edge display for one-handed operation of the device in different situations.

“We found that with the edge screen, users hands felt more tired and they tended to have more unintentional touches and errors so the flat screen is more ergonomically friendly,” said Freivalds.

He was the recipient of the Fulbright Award (1984, University of Nottingham, England), the College of Engineering Outstanding Research Award (1985) and the then-named Institute of Industrial Engineers Innovation Award (1996).

Freivalds is a fellow of the Institute of Industrial and Systems Engineers Fellow and the Human Factors and Ergonomics Society, and is on the editorial boards for the International Journal of Industrial Ergonomics and for Applied Ergonomics.

Sung is planning to graduate with his doctoral degree in August. He has accepted a position with LG upon the completion of his degree.