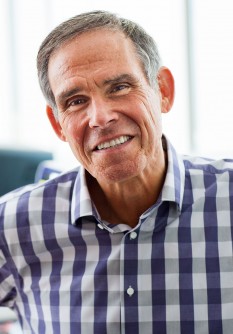 Newswise — LA JOLLA, CA – December 18, 2017 – Reflective of the close working relationship between two San Diego area research institutes—The Scripps Research Institute (TSRI) and the Scripps Translational Science Institute (STSI)—Eric Topol, MD, the founder and director of STSI, has been named executive vice president at TSRI. Peter Schultz, PhD, will continue in his role as TSRI president and Topol will maintain his leadership responsibilities at STSI while taking on additional responsibilities, including overseeing communications at TSRI.

“Eric is an esteemed colleague with a clear vision for integrating scientific discovery and translational medicine,” says Schultz. “His considerable communication skills, along with his focus on utilizing genomic and digital tools to empower patients and improve individual health care, are assets to the long-term mission of TSRI.”

TSRI and STSI currently work closely to streamline the process of scientific discovery and facilitate translational medicine. The respected journal Nature recently ranked TSRI “the most influential research institution in the world.” And last year, the Institute received a major funding award from the National Institutes of Health (NIH) to lead key participant enrollment and research activities for the Precision Medicine Initiative’s (PMI) All of UsResearch Program. The Research Program, which is currently beta testing, will enroll participants in an ambitious effort to gather health and lifestyle data from one million or more people living in the U.S. STSI is leading the All of Us Participant Center, and is tasked with developing strategies for long-term engagement and retention of participants nationwide, including communities traditionally underrepresented in biomedical research.

The two institutes are also long-term collaborators on the NIH’s Clinical and Translational Science Award, a national consortium of medical research institutes focused on getting more treatments to more patients more quickly.

Topol is a prolific researcher with over 190,000 citations, an h-index (measuring a scientist’s impact) of 207 and, as ranked by the Institute for Scientific Information, one of the top ten cited biomedical scientists. He is well known for his books The Patient Will See You Now: The Future of Medicine Is In Your Hands and The Creative Destruction of Medicine: How the Digital Revolution Will Create Better Healthcare.

“The intersection of life science and medicine is now center stage,” Topol says. “We are at a unique time in medicine, where transdisciplinary efforts will be required to not only free and amass the data, but also to maximize its value to promote human health. I’m looking forward to my expanded roles within TSRI.”

About the Scripps Translational Science Institute

The Scripps Translational Science Institute (STSI) aims to replace traditional one-size-fits-all medicine with precision health care through the clinical study and validation of genomic medicine, wireless health sensors and apps, and other digital medicine technologies. Supported in part by a National Institutes of Health Clinical and Translational Science Award through The Scripps Research Institute (TSRI), STSI uses clinical and biomedical expertise to accelerate the movement of new discoveries and technologies from the laboratory to the patient bedside while training a new generation of physician-scientists. Collaborators include Scripps Health, a nonprofit integrated health care delivery system based in San Diego, Calif., which originally partnered with TSRI to create the institute. More information can be found at www.stsiweb.org.