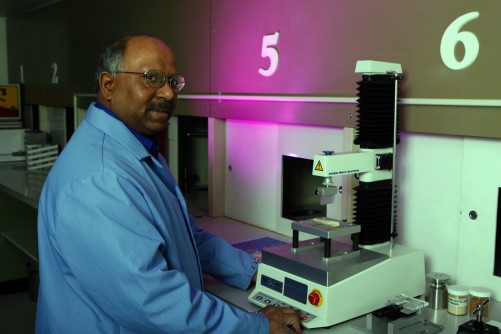 SDSU food scientist Padu Krishnan explored use of distillers dried grains with solubles, or DDGS, as an added ingredient to boost protein and fiber in traditional Asian flatbread.

SDSU food scientist Padu Krishnan said it is one example of the ways in which distillers dried grains with solubles, or DDGS, can help improve human nutrition worldwide. DDGS is produced as a co-product when processing corn into ethanol, so corn producers from the American Midwest and elsewhere could tap a vast new market if manufacturers begin using it to fortify products in human diets.

Krishnan and his student, Sowmya Arra, worked with Kurt Rosentrater of the USDA Agricultural Research Service’s North Central Agricultural Research Laboratory on the project. In lab studies they found that using DDGS to make up 10 percent of the dough in chapathi, an Asian whole wheat unleavened bread eaten in South Asia and East Africa, boosted the fiber from 2.9 percent to 7.8 percent. Using 20 percent DDGS in the dough increased the fiber to 10.3 percent.

Similarly, protein increased from 10.5 to 12.9 percent when they used DDGS to make up 10 percent of the dough in chapathi. Using 20 percent DDGS increased the protein to 15.3 percent.

In the United States, DDGS is most often fed to livestock. But Krishnan, a cereal chemist, has been studying and writing about the possibility of using DDGS in human diets since the early 1990s. Especially now with new state-of-the-art ethanol plants coming online in recent years, Krishnan said, the ethanol industry is well poised to make food-grade DDGS.

DDGS is ideal for including in human diets because it is rich in dietary fiber, at 40 percent, and also in protein, at 36.8 percent.

Krishnan said the results from the South Dakota State lab studies were enough to catch the attention of the food industry because it suggests a strategy to bolster diets with a bland but highly nutritious ingredient that won’t interfere with the taste of foods. Chapathies and naan, another kind of flatbread, made with 20 percent DDG were well accepted by a taste panel.

Krishnan said it’s one example of how SDSU’s Department of Nutrition, Food Science and Hospitality is exploring the use of locally-produced, South Dakota products such as corn to meet nutritional demands worldwide.

“However, the use of South Dakota white wheats such as ‘Alice’ and ‘Wendy’ in the formulation gives us some leeway when color is the aesthetic criterion,” Krishnan said.

The shelf life of chapathies at room temperature was one week without preservatives and refrigeration, he added.