Europe warming faster than expected due to climate change 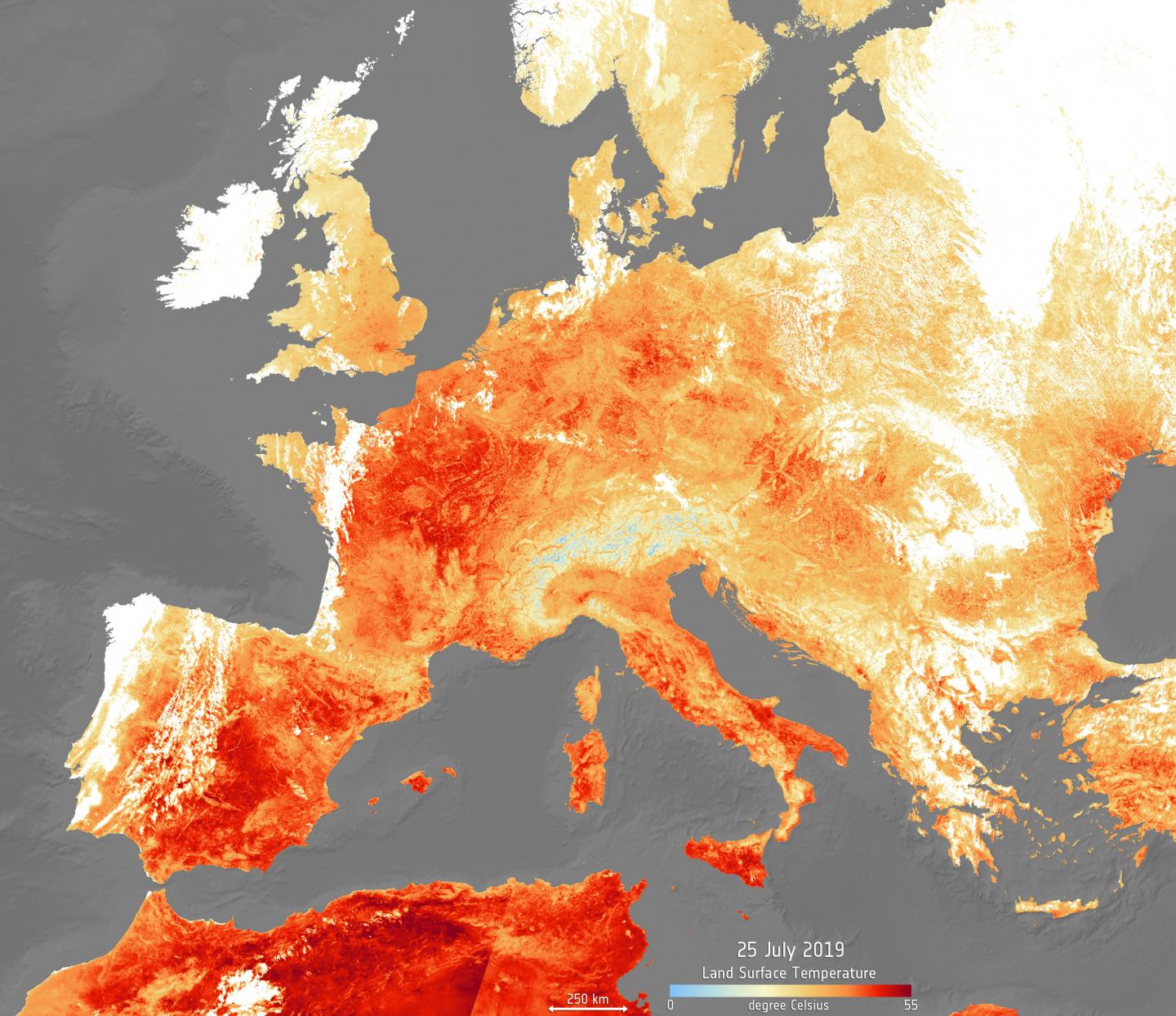 This is a satellite image of the heat energy emitted from Europe during 25 July 2019 shows this summer's highest extremes.

Temperatures in Europe have hit record highs this summer, passing 46.0 degrees Celsius (114.8 degrees Fahrenheit) in southern France. New research in the AGU journal Geophysical Research Letters finds the number of summer days with extreme heat has tripled since 1950 and summers have become hotter overall, while the number of winter days with extreme cold decreased in frequency by at least half and winters have become warmer overall.

"Even at this regional scale over Europe, we can see that these trends are much larger than what we would expect from natural variability. That's really a signal from climate change," said Ruth Lorenz, a climate scientist at the Swiss Federal Institute of Technology in Zurich, Switzerland, and lead author of the new study.

Extreme heat is dangerous because it stresses the human body, potentially leading to heat exhaustion or heat stroke. Scientists knew climate change was warming Europe, but they mostly studied long-term changes in extreme temperatures. The new study looked at observational data to evaluate whether the climate models used for regional projections can reproduce observed trends.

In the new study, Lorenz and her colleagues used observational data taken by European weather stations from 1950-2018 and then analyzed the top 1% of the hottest heat extremes and highest humidity extremes, and the top 1% coldest days during that period.

"We looked further at the hottest day or coldest night per year, so for each year we looked for the maximum/minimum value and how these changed over time," Lorenz said.

They found the number of extreme heat days in Europe has tripled since 1950, while the number of extreme cold days decreased by factors of two or three depending on the region. Extremely hot days have become hotter by an average of 2.30 degrees Celsius (4.14 degrees Fahrenheit), while extremely cold days have warmed by 3.0 degrees Celsius (5.4 degrees Fahrenheit) on average. The hottest days and coldest nights warmed significantly more than their corresponding summer and winter mean temperatures.

Individual regions throughout Europe experienced drastically different temperature trends, which makes it difficult to compare the average European temperatures to specific stations' extremes, according to the authors. In Central Europe, the extremes warmed by 0.14 degrees Celsius (0.25 degrees Fahrenheit) per decade more than the summer mean, equivalent to an almost 1.0 degree Celsius (1.8 degree Fahrenheit) increase more than the average over the whole study period, according to Lorenz.

More than 90% of the weather stations studied showed the climate was warming, a percentage too high to purely be from natural climate variability, according to the researchers.

The results also showed that the region was warming faster than climate models projected. Some regions experienced higher extremes than expected and some had lower extremes that expected.

"In the Netherlands, Belgium, France, the model trends are about two times lower than the observed trends," said Geert Jan van Oldenborgh, a climate analysist at the Royal Netherlands Meteorological Institute in De Bilt, Netherlands, who was not connected to the new study. "We're reaching new records faster than you'd expect."

European summers and winters will only grow hotter in the coming years as climate change accelerates, impacting cities and people unprepared for rising temperatures, according to the study authors.

"Lots of people don't have air conditioning for instance and it makes this really important," Lorenz said. "We expected results based on modeling studies but it's the first time we see it in what we've observed so far."

Founded in 1919, AGU is a not-for-profit scientific society dedicated to advancing Earth and space science for the benefit of humanity. We support 60,000 members, who reside in 135 countries, as well as our broader community, through high-quality scholarly publications, dynamic meetings, our dedication to science policy and science communications, and our commitment to building a diverse and inclusive workforce, as well as many other innovative programs. AGU is home to the award-winning news publication Eos, the Thriving Earth Exchange, where scientists and community leaders work together to tackle local issues, and a headquarters building that represents Washington, D.C.'s first net zero energy commercial renovation. We are celebrating our Centennial in 2019. #AGU100

This paper is freely available for 30 days. Journalists and public information officers (PIOs) can download a PDF copy of the article by clicking on this link: https://agupubs.onlinelibrary.wiley.com/doi/epdf/10.1029/2019GL082062

Journalists and PIOs may also request a copy of the final paper by emailing Nanci Bompey at [email protected]. Please provide your name, the name of your publication, and your phone number.

Neither this paper nor this press release is under embargo.

"Detection of a Climate Change Signal in Extreme Heat, Heat Stress, and Cold in Europe From Observations"

Caption: This is a satellite image of the heat energy emitted from Europe during 25 July 2019 shows this summer's highest extremes.