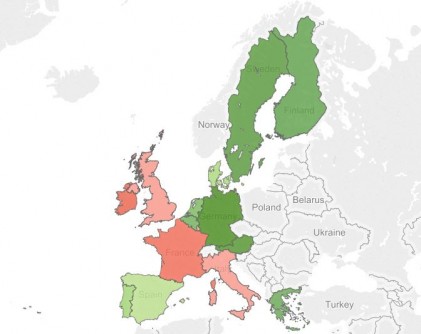 EU-15 citizens increasingly identify themselves as European compared to recent decades. Explore the data at http://www.iiasa.ac.at/web/home/about/news/160602-Europe-ID.html

Newswise — According to a new study published today in the journal Population Development Review, 61% of citizens within the EU-15 see themselves as European in addition to or in lieu of their national identity in 2013, compared to 58% on average from 1996 to 2004. The largest increases were seen in Germany, Austria, Sweden, and Finland, and surprisingly also in Greece. In contrast the United Kingdom and France saw a decline in European identity, with the UK coming at the very bottom. The study was limited to the EU-15 only for consistency and comparability with the previous study, which used data from 1996-2004, when there were only 15 member states in the EU.

The current study is a reassessment of a 2006 study by IIASA World Population Program Director Wolfgang Lutz and colleagues published in Science, which found evidence that younger cohorts were more likely to have multiple identities, seeing themselves as both European as well as their national identity. Using a demographic model of cohort replacement called “demographic metabolism,” which describes the process of social change as younger people replace older people in the population, they projected that the proportion of the population with a European identity would continuously increase as the more European-minded cohorts moved up the age pyramid. For the new cohorts entering adult age they projected that a linear trend of improvement would continue. The new study presents an empirical test of the predictive power of the model and finds that in fact, the first assumption was correct but the second was not. “It probably comes as a surprise to many that even with the problems the EU is facing, a higher proportion of citizens within the EU-15 see themselves as European as compared to ten or twenty years ago,” says IIASA researcher Erich Striessnig, who led the study.

The studies relied on data from the Eurobarometer survey, specifically responses to the question of whether people see themselves as nationals of their respective country only, or also as Europeans. The survey, which asks European national populations about their support for and perceived benefits from the EU, has asked the same question since 1996.

The study also showed that European identity continued to increase among the population above age 35, which constitutes a large majority of the electorate within the EU, and contributes disproportionate influence as decision makers and politicians.

The researchers point out that identification with a political entity such as the EU is necessary for the system’s stability and legitimacy. “A continued increase in the proportion of Europe’s adult population that has a European identity suggests a likely further increase in European integration, but not necessarily in its current form,” says Lutz.

With respect to forecasting tools Lutz adds: “Our new results suggest that the cohort-specific model of demographic metabolism is a very robust forecasting tool for characteristics and attitudes that are established at young age and then hardly change over the course of life. In contrast, our results show that the more conventional tool of simple trend extrapolation that we used for the new cohorts entering the process can easily give wrong forecasts in times of crisis or structural change.”

Striessnig adds, “When so many commentators say that the EU is doomed, eventually people—especially young people—may start to believe it and the expectation becomes self-fulfilling. I think it is important to turn this around and make the argument that there is still hope for the European Union.”ReferenceStriessnig E, Lutz W (2016). Demographic strengthening of European identity. Population and Development Review. http://www.onlinelibrary.wiley.com/doi/10.1111/j.1728-4457.2016.00133.x/abstract