EVALI and other vaping risks: What you should know 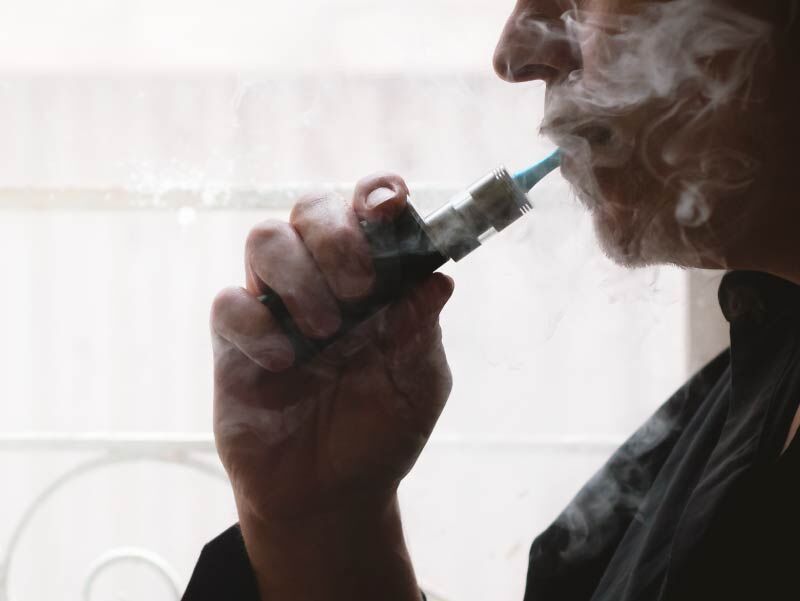 Some believe e-cigarette use, or vaping, is a much healthier alternative to regular smoking.

“Depending on the flavoring, there is generally less odor than cigarettes. It is convenient to carry and easy to use. Various flavorings and social media promotions have made vaping attractive,” says Matthew Park, M.D., Ph.D., a pulmonologist at Sinai Hospital of Baltimore.

But whether it’s the artificial flavorings you may be drawn to or you are considering switching (or have already switched) to vaping as a way to quit your regular smoking habit, know that there is no completely safe substitute for smoking other than stopping altogether.

Recent data suggest that e-cigarette vapor can cause cancer in mice, and the Centers for Disease Control and Prevention recently coined the term EVALI (e-cigarette- or vaping product use-associated lung injury) in response to an outbreak of severe lung illness cases in 2019.

Here’s what you should know about EVALI and vaping:

Tetrahydrocannabinol (THC) in e-cigarette or vaping products (particularly those you get from informal sources like family and friends or someone off the street) is linked to most EVALI cases and played a major role in the recent nationwide outbreak. Also linked to EVALI is vitamin E acetate, an additive in THC-containing vaping fluids.

It’s complicated, a vitamin being associated with a serious lung condition. Vitamin E acetate can be found in skin care products, is an edible dietary supplement, and is in many foods we eat. When inhaled, however, vitamin E can be toxic to our lungs.

“The long structural tail of vitamin E allows it to alter the characteristics of a special protein in the lung that is vital for lung function,” Park says. “Another potential mechanism of lung injury is through ketene, created by heating vitamin E acetate, which can act as a lung irritant.”

Notable symptoms associated with EVALI are similar to those associated with other respiratory diseases and include cough, shortness of breath and fatigue. Other symptoms include fever, chest pain, weight loss, nausea, vomiting, diarrhea, and abdominal pain. “Follow-up care is important since re-hospitalization or death occurred within a few days of initial medical evaluation in some cases,” Park says.

Your doctor will evaluate your history of using e-cigarettes and other vaping devices and may order a chest X-ray or CT scan to check for hazy spots on your lungs (called opacities) that indicate tissue damage. Since the symptoms are so similar to other respiratory conditions, doctors typically diagnose EVALI via process of elimination.

EVALI treatment is based on expert recommendations and the severity of one’s condition. According to the American Lung Association, after bacterial and viral infections have been excluded, treatments can include corticosteroids to help fight inflammation in the lungs. Patients with more severe cases of EVALI likely will need hospitalization and may have to be placed on a ventilator. In some cases, even patients with less severe symptoms may need supplemental oxygen, the American Lung Association says.

What you should do

If you don’t currently smoke or vape, don’t start. If you’re trying to quit smoking, go cold turkey or use “FDA-approved means of nicotine replacement, bupropion or varenicline in combination with counseling,” Park says.

You also shouldn’t smoke and vape at the same time. “Dual use of vaping and smoking does not reduce carcinogen exposure when compared to smoking,” Park says.

Other substances and product sources in vaping materials are being examined as possible causes of EVALI, but it is recommended that vitamin E acetate not be added to e-cigarettes or vaping products. In fact, you should not add substances not intended by the manufacturer to any products, even products purchased through retail establishments, according to the CDC.

Visit lifebridgehealth.org or call 410-601-WELL to learn more about services at LifeBridge Health and scheduling an appointment with one of our physicians.