Even as Hospitals Cut Risky Antibiotic Use In-House, Patients Often Go Home with Them

Targeting fluoroquinolone prescribing in hospitals is effective, a 48-hospital study shows, but many patients still get discharge prescriptions for them 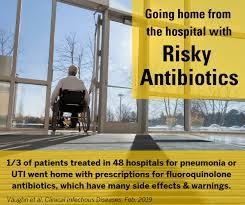 A new study of antibiotic prescribing finds that 1/3 of patients discharged from 48 Michigan hospitals for pneumonia or urinary tract infections received prescription for a fluoroquinolone antibiotic - a powerful group of drugs that carries the risk of serious side effects. The rate of prescribing the drugs was higher at hospitals that reported they were making an active effort to reduce inpatient fluoroquinolone prescribing. 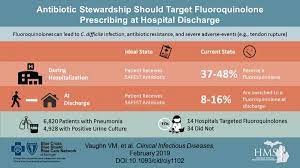 A snapshot of key findings about fluoroquinolone antibiotic prescribing in hospitals. 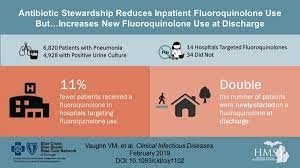 Newswise — Even as hospitals try to cut back on prescribing powerful but risky antibiotics for their patients, a new study shows that many of those patients still head home with prescriptions for those same drugs -- increasing their risk of everything from “superbug” infections to torn tendons.

In fact, the hospitals that said they are actively trying to reduce use of a group of antibiotics known as fluoroquinolones were twice as likely to discharge patients with a new prescription for one of the drugs in that risky group.

In all, one-third of the patients studied received a fluoroquinolone prescription at the end of their hospital stay, despite the fact that current guidelines call for restricted use due to side effects.

And across all 48 Michigan hospitals in the study, discharge-related prescriptions accounted for two-thirds of the entire fluoroquinolone supply prescribed to the nearly 12,000 patients treated for pneumonia or urinary tract infections. The drugs accounted for 42 percent of all antibiotics prescribed at discharge.

“Fluoroquinolone antibiotics are easy to use, but carry a lot of risk for patients and society at large,” says Valerie Vaughn, M.D., M.Sc., lead author of the new paper and a hospital medicine specialist at Michigan Medicine, the University of Michigan’s academic medical center. “These results show we need to focus on not just their use in hospitals, but also in the prescriptions that we send patients home with. Discharge prescribing is a big loophole.”

Vaughn and her colleagues report the findings in the journal Clinical Infectious Diseases. The data come from the Michigan Hospital Medicine Safety (HMS) Consortium which brings together hospitalist, general internal medicine and infectious diseases physicians from across the state to improve the care of hospitalized patients.

The data come from patients treated for pneumonia or UTIs over a nearly two-year period ending in fall 2017. That includes the first nine months after national organizations began requiring hospitals to have a program for tracking and reducing use of antibiotics.

Called antimicrobial stewardship, such programs stem from a need to curb the rise of “superbugs” or bacteria that evolve to resist treatment and threaten patients’ lives.

A risky family of antibiotics

Fluoroquinolones include name-brands like Cipro and Levaquin as well as generic antibiotics whose names end in “floxacin.” They have been especially linked to the rise of drug-resistant organisms, and to potentially life-threatening gut infections with an opportunistic microbe called Clostridiodes difficile.

They’ve also been linked to ruptures of Achilles tendons, to dangerously low blood sugar levels in people with diabetes, and to mental health problems including disorientation and delirium.

The U.S. Food and Drug Administration (FDA) has issued several “black box” warnings about their side effects – most recently in December with a warning that fluoroquinolones could cause rupture of the aorta, the huge artery leading from the heart to the rest of the body.

That warning suggests doctors should not prescribe the drugs to the elderly, people with high blood pressure and people with a risk or history of aneurysms.

The new study focuses on pneumonia and UTI because the two conditions account for almost half of antibiotic use in hospitals. Most patients with these conditions are cared for by hospitalists or general internists, rather than infectious diseases specialists who mainly focus on the most serious cases.

In all, more than 10 percent of patients in the study were switched to a fluoroquinolone antibiotic when they were discharged.

While fluoroquinolones are just one group of antibiotics that doctors can choose from, Vaughn notes that they do carry the advantage of being able to treat a broad spectrum of infectious organisms, and to be used in patients who are allergic to penicillin.

They also come in pill form, rather than needing to be delivered intravenously, which makes them much more attractive for discharge prescriptions.

But if patients are getting through their hospitalization without them, then they’re likely not the right choice for treatment after they leave the hospital, says Vaughn.

“When patients first come in to the hospital, doctors don’t typically have test results to show what’s causing their infection,” which could guide antibiotic choice, Vaughn explains. They also may not know if the patient is allergic to penicillin.

“But by the time they’re leaving you have more results and history – the most information you’re going to have about them,” she adds. “This makes the discharge prescription a great place for stewardship programs to intervene, and to make antibiotic choice more of an active thought than an afterthought.”

The phenomenon observed in the new study – where the hospitals that had active antimicrobial stewardship programs had higher rates of prescribing fluoroquinolones at discharge – deserves more scrutiny, says Vaughn.

Fourteen of the hospitals in the study had specific measures in place to require review of fluoroquinolone prescriptions during hospitalization.

It may be that while pharmacists and infection prevention specialists are keeping an eye on in-hospital prescribing, they don’t have access to, or don’t focus on, the prescriptions written at discharge. Electronic health record systems track both inpatient and discharge medications, but they are often in separate sections of the record.

In fact, says Vaughn, when the HMS team showed hospital-specific data on discharge antibiotic prescribing to the physicians in the partnership, it was the first time most had seen such data.

Since the data were shared, several hospitals in the consortium have begun paying special attention to discharge prescribing of fluoroquinolones, and others are preparing to. For example, a project is now underway to improve antibiotic prescribing at discharge at Michigan Medicine.

If prescribing drops, the side effects of the drugs should too. The researchers note that special focus on appropriate fluoroquinolone prescribing in the United Kingdom has resulted in a 60 percent drop in C. diff infections.

In the U.S., hospitals can be penalized financially if a high proportion of their inpatients develop C. diff infections during their stay. But those penalties don’t apply if the patient develops C. diff after they leave the hospital.

For patients and families

Hospitalized patients don’t usually express a preference for which antibiotic they receive – except for saying they have a penicillin allergy if they believe they do, Vaughn says.

Patients and their families can speak up about not wanting a fluoroquinolone in the hospital or at discharge, especially if they have conditions like diabetes, high blood pressure, history of aneurysm, or tendon/muscle problems. Patients with a history of C. diff should be especially wary.

Patients who have a past test confirming their penicillin allergy, or who experienced shortness of breath or hives after receiving a penicillin-containing drug, should make sure their record notes this. But patients who had an upset stomach or diarrhea after taking penicillin typically do not have an allergy, and should ask to be tested so they know for sure and can receive the lowest-risk antibiotic.

Even if the doctor recommends a fluoroquinolone specifically, patients and families can ask to be given the shortest course possible, to reduce the risk of side effects. Research has shown that often short courses of the drugs are safe and effective.

“In this era of choosing wisely in medicine, our mantra should be that less is more when it comes to antibiotics,” says Vaughn.

Support for HMS is provided by Blue Cross and Blue Shield of Michigan and Blue Care Network as part of the BCBSM Value Partnerships program. HMS is one of nearly 20 Collaborative Quality Initiatives.