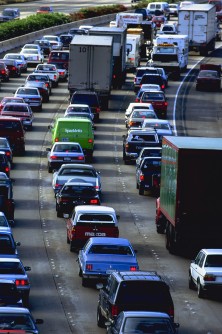 Proximity to highway traffic linked to reductions in lung function.

Newswise — Dramatic improvements in air quality in U.S. cities since the 1990s may not be enough to ensure normal lung function in children, according to new research published in the April 15 American Journal of Respiratory and Critical Care, a journal of the American Thoracic Society.

In “Lifetime Exposure to Ambient Air Pollution and Lung Function in Children,” researchers report that children exposed to higher levels of air pollution, including fine particulate matter (PM2.5) and soot (black carbon), had worse lung function than those living in less polluted areas. By age eight, the lung function of children living within 100 meters of a major roadway was on average 6 percent lower than that of children living 400 meters or more away. “Few studies have examined childhood exposure to air pollution after the dramatic improvements in air quality of the 1990’s to see if exposure to air pollution at these lower levels is linked to children’s lung function,” said lead author Mary B. Rice, MD, MPH, an instructor at Harvard Medical School, who noted that PM2.5 levels in Boston have declined by more than 30 percent between 1996 and 2006. Researchers studied 614 children born to mothers who enrolled between 1999 and 2002 in Project Viva, a long-term study of women’s and children’s health in eastern Massachusetts. Authors calculated the distance from the child’s home to the nearest major highway, and estimated first year of life, lifetime and prior-year exposure to PM2.5, using satellite measurements. They also estimated first year of life, lifetime and prior-year exposure to black carbon using 148 monitoring stations. At age eight, children underwent lung function tests. Researchers found:• Children living the closest to major highways had the greatest reductions in their lung function.• Recent air pollution exposures most negatively impacted lung function measures.• Children who experienced greater improvements in air quality after the first year of life (either due to a move or changes in local pollution around the home) had better lung function compared to those whose air quality did not improve as much. “These important findings are from a novel study combining modern modeling of exposures to air pollution with robust measurements of lung function, conducted in a community with pollutant levels now under EPA standards,” wrote Cora S. Sack, MD, and Joel D. Kaufman, MD, MPH, of the University of Washington, in an accompanying editorial. “This adds to the urgency for more work to understand the impacts of these low-level exposures on human health.” Study limitations include the fact that lung function was measured only once and a relatively homogenous study population.

The study will follow these children into adolescence. “We plan to evaluate if the benefits of cleaner air endure by investigating if children with the greatest improvements in air quality continue to have better lung function than their peers in the teen years.” Dr. Rice said. The study was funded by the National Institutes of Health and the U.S. Environmental Protection Agency.

About the American Journal of Respiratory and Critical Care Medicine The AJRCCM is a peer-reviewed journal published by the American Thoracic Society. The Journal takes pride in publishing the most innovative science and the highest quality reviews, practice guidelines and statements in pulmonary, critical care and sleep medicine. With an impact factor of 12.996, it is the highest ranked journal in pulmonology. Editor: Jadwiga Wedzicha, MD, professor of respiratory medicine at the National Heart and Lung Institute (Royal Brompton Campus), Imperial College London, UK.