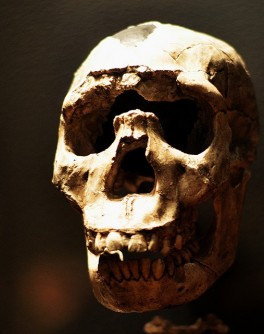 Newswise — Neanderthal genetic material is found in only small amounts in the genomes of modern humans because, after interbreeding, natural selection removed large numbers of weakly deleterious Neanderthal gene variants, according to a study by Ivan Juric and colleagues at the University of California, Davis, published November 8th, 2016 in PLOS Genetics.

Humans and Neanderthals interbred tens of thousands of years ago, but today, Neanderthal DNA makes up only 1–4% of the genomes of modern non-African people. To understand how modern humans lost their Neanderthal genetic material and how humans and Neanderthals remained distinct, Juric and colleagues developed a novel method for estimating the average strength of natural selection against Neanderthal genetic material. They found that natural selection removed many Neanderthal alleles from the genome that might have had mildly negative effects. The scientists estimate that these gene variations were able to persist in Neanderthals because Neanderthals had a much smaller population size than humans. Once transferred into the human genome, however, these alleles became subject to natural selection, which was more effective in the larger human populations and has removed these gene variants over time.

The study is one of the first attempts to quantify the strength of natural selection against Neanderthal genes. It enhances the understanding of how Neanderthals contributed to human genomes (along with Harris and Nielsen, Genetics 2016). It also confirms previous reports that East Asian people had somewhat higher initial levels of Neanderthal ancestry than Europeans. These findings shed new light on the role of population size on losing or maintaining Neanderthal ancestry in humans, and add to our understanding of our close relatives - the Neanderthals.

Of the study, Ivan Juric says: “For a while now we have known that humans and Neanderthals hybridized. Many Europeans and Asians–along with other non-African populations–are the descendants of those hybrids. Previous work has also shown that, following hybridization, many Neanderthal gene variants were lost from the modern human population due to selection. We wanted to better understand the causes of this loss. Our results are compatible with a scenario where the Neanderthal genome accumulated many weakly deleterious variants, because selection was not effective in the small Neanderthal populations. Those variants entered the human population after hybridization. Once in the larger human population, those deleterious variants were slowly purged by natural selection.

The key finding of our study therefore is that the current levels of Neanderthal ancestry in modern humans are in part due to long-term differences in human and Neanderthal population sizes. The human population size has historically been much larger, and this is important since selection is more efficient at removing deleterious variants in large populations. Therefore, a weakly deleterious variants that could persist in Neanderthals could not persist in humans. We think that this simple explanation can account for the pattern of Neanderthal ancestry that we see today along the genome of modern humans.

From our study, we cannot conclude that differences in demography explain everything. For instance, genes that were deleterious only in human-Neanderthal hybrids might have existed, and sexual selection or other forms of selection against hybrids could have been very important processes during human-Neanderthal hybridization. Still, I find it fascinating to think that if the Neanderthals had reached larger population sizes in Europe, or if modern human populations had grown slower, some of us today would probably carry a lot more Neanderthal ancestry in our genome.”

In your coverage please use this URL to provide access to the freely available article in PLOS Genetics: http://dx.doi.org/10.1371/journal.pgen.1006340

Funding: This work was supported by an Advanced Postdoc Mobility fellowship from the Swiss National Science Foundation P300P3_154613 to SA, and by grants from the National Science Foundation under Grant No. 1353380 to John Willis and GC, and the National Institute of General Medical Sciences of the National Institutes of Health under award numbers NIH R01 GM108779 to GC. The funders had no role in study design, data collection and analysis, decision to publish, or preparation of the manuscript.