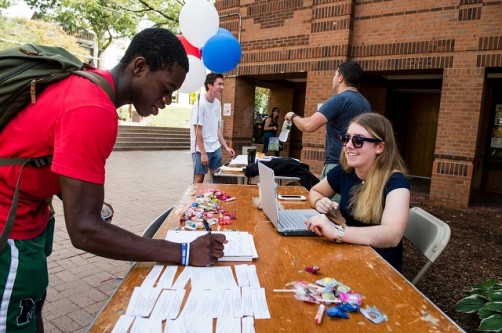 College students register to vote at a campus civics fair. According to CIRCLE polling, interest among young voters in the 2018 midterm elections is at historic levels

Newswise — MEDFORD/SOMERVILLE, Mass. (Oct. 9, 2018)–Young voters are engaged in the 2018 midterm elections and plan to vote in higher numbers, according to new findings from an exclusive pre-election poll of young people, ages 18-24, from the Center for Information and Research on Civic Learning & Engagement (CIRCLE)—the preeminent, non-partisan research center on youth engagement at Tufts University’s Jonathan M. Tisch College of Civic Life.

The new polling found that likelihood to vote, attention to congressional races and campaign outreach to young people closely mirror engagement in the run-up to the 2016 presidential election. These results are unusual for a midterm cycle, when youth participation is lower than in a presidential election year. These findings could signal a response to youth-driven organizing, increased outreach by campaigns and other groups and young people’s potential to influence the outcome of key races.

“We know that young people can move elections and shape our future, but too often their participation is discounted, discouraged or suppressed. This poll shows that-  in a crucial midterm election year - young people are paying close attention and are planning to have their voices heard at the ballot box,” said Kei Kawashima-Ginsberg, director of CIRCLE. “Candidates and their campaign teams should continue to reach out to young people and seek their views, and family members, peers, schools and community organizations should support their participation in our shared democracy.”

Key findings of this exclusive analysis include:

This is the first in a series of analyses about an exclusive new CIRCLE 2018 pre-election poll of youth aged 18-24. Over the course of the next two weeks, CIRCLE will release additional data and analyses from the 2018 Civic Youth Poll on topics including: youth organizing and activism, political parties, local news, and how young people are engaging politically in their communities.

The survey was developed by CIRCLE, and the polling firm GfK collected the data from their nationally representative panel of respondents between September 5 and September 26, 2018. The study surveyed a total of 2,087 people aged 18 to 24 in the United States, with representative over-samples of Black and Latino youth, and of 18 to 21-year-olds. The margin of error is +/- 2.1 percentage points. Unless mentioned otherwise, data are for all the 18 to 24-year-olds in our sample.

CIRCLE  is a nonpartisan, independent, academic research center that studies young people in politics and presents detailed data on young voters in all 50 states. CIRCLE is part of the Jonathan M. Tisch College of Civic Life. CIRCLE is a co-lead on the 22x20 campaign, which is a network of education, media literacy and media partners working to mesh media literacy with voter engagement before the 2020 election.

Throughout the 2018 election cycle, including on and after Election Day, CIRCLE youth vote experts are available for interviews and/or analysis.

Media outlets should contact Jen McAndrew at jennifer.mcandrew@tufts.edu or 617-627-2029.

The only university-wide college of its kind, the Jonathan M. Tisch College of Civic Life offers transformational student learning and service opportunities, conducts groundbreaking research on young people's civic and political participation and forges innovative community partnerships. Its work is guided by two core beliefs: that communities, nations and the world are stronger, more prosperous and more just when citizens actively participate in civic and democratic life; and that higher education has a responsibility to develop the next generation of active citizens. Learn more at http://tischcollege.tufts.edu and on Twitter at @TischCollege.