Newswise — It may be uncomfortable at first, but doing exercises to strengthen your quadriceps after you've had knee replacement surgery due to osteoarthritis is critical to your recovery. In fact, it can boost the function of your new knee to nearly that of a healthy adult your age.

That's the finding of a University of Delaware study published in the February issue of Arthritis Care & Research.

The authors include Lynn Snyder-Mackler, Alumni Distinguished Professor of Physical Therapy at the University of Delaware, Stephanie Petterson, clinical faculty at Columbia University, Ryan Mizner, an assistant professor at Eastern Washington University, Jennifer Stevens, an assistant professor at the University of Colorado at Denver, and Drs. Leo Raisis, Alex Bodenstab, and William Newcomb of First State Orthopaedics in Newark, Delaware.

"It sounds logical that exercises to strengthen your knee should be a component of your post-operative physical therapy after a total knee replacement, but it's not the convention at all," says Snyder-Mackler.

"There are all of these old wives' tales that strength training is a detriment to the patient and that the new knee should be treated delicately," Snyder-Mackler notes. "Our study demonstrates that intensive strength exercise as outpatient therapy is critical to begin three to four weeks after surgery."

Nearly 500,000 knee replacements, also known as total knee arthroplasties, are performed every year in the United States to treat severe knee osteoarthritis, the loss of the cushiony cartilage padding the knee. The joint disease leaves its sufferers with persistent pain and limited function, resulting in an overall diminished quality of life.

While knee replacement alleviates the pain of osteoarthritis and improves function, patients exhibit impaired quadriceps strength and function for such activities as walking and climbing stairs, and the levels remain below those of healthy people of the same age.

In a randomized controlled trial at the University of Delaware's Physical Therapy Clinic conducted between 2000 and 2005, 200 patients who had undergone knee replacements were given six weeks of progressive strength training two or three times a week starting four weeks after surgery. Half of the group also received neuromuscular electrical stimulation (NMES).

Their function was compared to that of 41 patients who received conventional rehabilitation and home physical therapy. Quadriceps strength, knee range of motion, and gait were measured in such tests as timed up and go, stair climbing and a six-minute walk.

"This study clearly demonstrates the importance of surgeons encouraging their patients to be compliant with progressive quadriceps strengthening during their rehabilitation to enhance their clinical improvement and function post-total knee replacement," notes Dr. Leo Raisis, a total joint surgeon and adjunct associate professor at the University of Delaware.

"Why undergo a $25,000 elective surgery and then not do as much as you can to get the most out of it and improve your quality of life?" Snyder-Mackler says. "Older people are incredibly motivated—they hurt after the surgery and they want to be better. They need to do this."

**A video featuring Snyder-Mackler and a patient, who had both knees replaced, is attached. A b-roll reel of the patient performing quadriceps exercises is also available.

Snyder-Mackler is available for interviews, as are two patients. 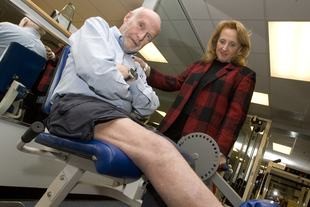 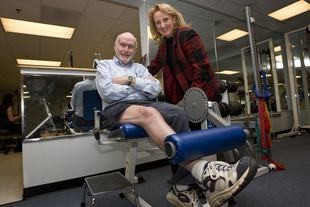