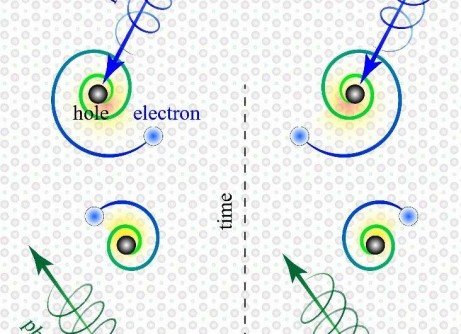 The two types of 'chiral surface excitons' are on the right and left side of the image. They are generated by right- and left-handed light (photons in blue). The excitons consist of an electron (light blue) orbiting a 'hole' (black) in the same orientation as the light. The electron and hole are annihilated in less than a trillionth of a second, emitting light (photons in green) that could be harnessed for lighting, solar cells, lasers and electronic displays.

Newswise — Rutgers and other physicists have discovered an exotic form of electrons that spin like planets and could lead to advances in lighting, solar cells, lasers and electronic displays.

It’s called a “chiral surface exciton,” and it consists of particles and anti-particles bound together and swirling around each other on the surface of solids, according to a study in the Proceedings of the National Academy of Sciences.

Chiral refers to entities, like your right and left hands, that match but are asymmetrical and can’t be superimposed on their mirror image.

The electrons and holes resemble rapidly spinning tops. The electrons eventually “spiral” towards the holes, annihilating each other in less than a trillionth of a second while emitting a kind of light called “photoluminescence.” This finding has applications for devices such as solar cells, lasers and TV and other displays.

The scientists discovered chiral excitons on the surface of a crystal known as bismuth selenide, which could be mass-produced and used in coatings and other materials in electronics at room temperature.

“Bismuth selenide is a fascinating compound that belongs to a family of quantum materials called ‘topological insulators,’ ” said senior author Blumberg, a professor in the Department of Physics and Astronomy in the School of Arts and Sciences. “They have several channels on the surface that are highly efficient in conducting electricity.”

The dynamics of chiral excitons are not yet clear and the scientists want to use ultra-fast imaging to further study them. Chiral surface excitons may be found on other materials as well.

Rutgers co-authors include doctoral students Xueyun Wang and Alexander Lee, and Board of Governors Professor Sang-Wook Cheong in the Rutgers Center for Emergent Materials, who developed the ultra-pure crystals for this study. Professor Dmitrii Maslov and graduate student Adamya Goyal at the University of Florida and principal investigator Alexander Kemper at North Carolina State University contributed to theory development and the interpretation of results.