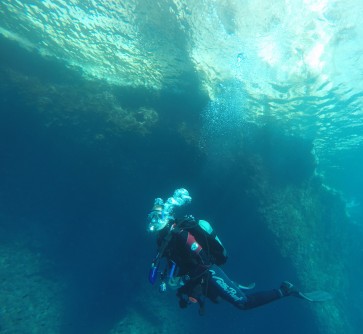 A diver inspects the formation of a tidal notch along the Karaburun Peninsula. 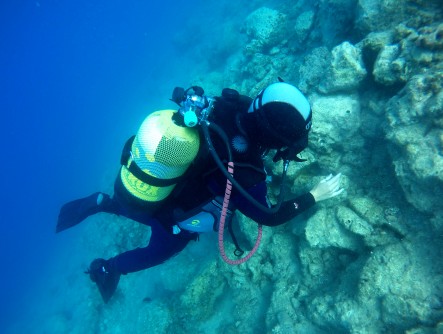 A diver inspects the rubble of a Roman marble quarry. 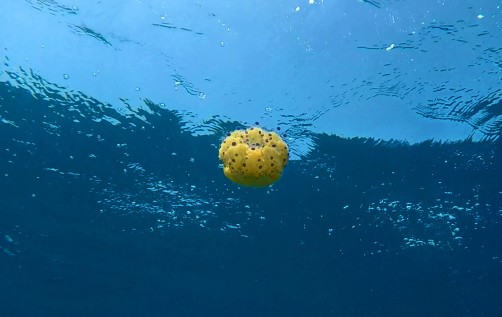 A jellyfish (Phacellophora camtschatica) in open water, indicators of the health of ecosystems. 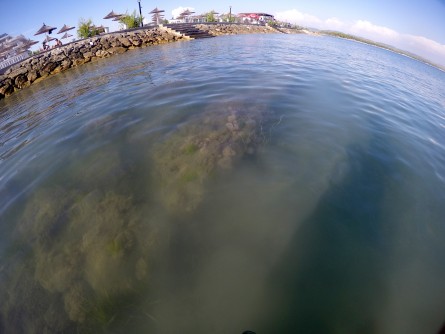 A submerged Roman wall within a few centimeters of the water's surface. 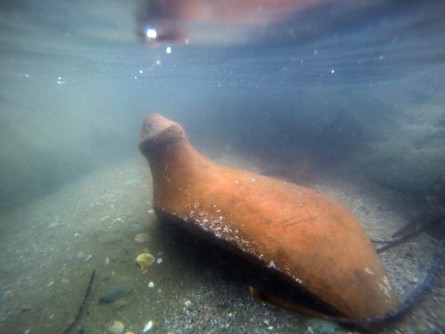 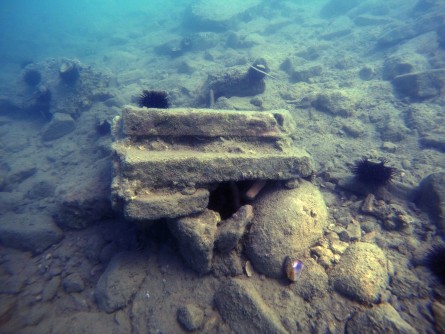 Roman bricks remain stacked among the rubble of an underwater structure. 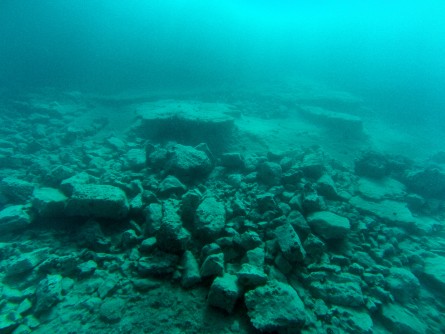 Rubble from a submerged wall. 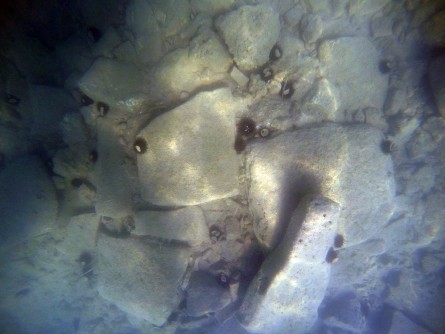 The remains of a submerged wall dating to the Roman period.

Newswise — An international team, co-directed by a University of Southampton (UK) archaeologist, has made a significant discovery at an underwater location in Albania – revealing that the submerged remains of a major ancient fortress and port are far larger than previously known.

The archaeological site of Triport, near the modern port of Vlora in the country, has been studied before, but divers have now found an additional eight acres of submerged structures, adding to known remains of approximately 12 acres.

The results suggest Triport was a harbour for a large settlement during the Roman period, perhaps associated with the ancient city of Aulon (now Vlora). Triport offered ships safe anchorage in both the sea and Narta Lagoon, and connected to ancient cities like Aulon and Apollonia through major Roman roads. The site was first explored in the 20th century, with further study in the early 2000s.

The expedition, directed by Neritan Ceka of the Albanian Institute of Archaeology and Peter Campbell of the University of Southampton and Albanian National Coastal Agency, has collected scientific data from one of the Mediterranean’s most dynamic regions. A team of 14 international researchers worked with the Albanian National Coastal Agency (Agjensia Kombëtare e Bregdetit) with the overall aim of assessing the coastal environment and underwater cultural heritage.

Peter Campbell comments: “We found indicators of ancient sea level change, Greek and Roman trade (4th BC - 7th AD), and contemporary environmental data. But one of the most significant discoveries was the larger submerged remains – prompting us to rethink the importance of Triport as a Roman harbour.

“Albania has some of the most important waters in the Mediterranean. This coastline was vital for ancient trade and it continues to be significant as the convergence zone for species from the Adriatic and Ionian seas.”

Restrictions on SCUBA diving and coastal development during the communist period has inadvertently provided Albania with some of the most pristine underwater cultural heritage in the Mediterranean, though this is changing rapidly due to a boom in coastal tourism.

Auron Tare, Director of the National Coastal Authority, says: “Albania's coastline contains rich cultural and natural resources, but it is under threat from unregulated development. Expeditions such as this help to identify at risk locations.”

The research project surveyed threatened areas from the lake surrounding the Butrint UNESCO World Heritage site in southern Albania to Sazan Island and Vlora Bay in the middle of the country – working closely with the government, navy, and local stakeholders such as fishermen, divers, and businesses.

The expedition documented ecological impacts from coastal development and pollution, including microplastics (tiny plastic particles which can cause damage to marine life), heavy metals from industry, and invasive species – to help monitor their effects. Coral, sponges, algae, and fish populations were also monitored.

The project discovered evidence of maritime trade and commerce from every time period. These include anchors made of stone, lead, and iron. One of the best indicators of trade are amphoras (large jug like containers), which have a dateable style based on their production area. The survey found amphoras dating from the Hellenistic Period through the early Middle Ages. Items from everyday life were also discovered, such as imbreces and tegulae (roof tiles) for houses, plates, and water jugs. Artefacts were undisturbed and left in situ for the future.

Ancient archaeological sites such as cities, harbour structures, and quarries around southern Albanian showed submergence up to 150 cm, due to a number of geological processes. Peter Campbell comments: “The Albanian coast is incredibly dynamic and we have found excellent indicators of sea-level change such as tidal notches to sunken cities and harbours. This lets us reconstruct the coast in the past, which tells us how different parts are changing through time and may change in the future.”

Assessment of potentially at risk underwater cultural heritage and environmental regions under the Coastal Authority will continue in future seasons with collaborations with international partners.

3) The Albanian Center for Marine Research is a NGO dedicated to education and research in Albanian coastal and inland waters. http://www.albaniamarinecenter.org/

4) Deep Blue Explorers is a nonprofit for applied marine and atmospheric science based in Cres, Croatia. https://www.deepblueexplorers.wordpress.com/

5) For more information about Archaeology at Southampton visit: http://www.southampton.ac.uk/archaeology/index.page

6) Through world-leading research and enterprise activities, the University of Southampton connects with businesses to create real-world solutions to global issues. Through its educational offering, it works with partners around the world to offer relevant, flexible education, which trains students for jobs not even thought of. This connectivity is what sets Southampton apart from the rest; we make connections and change the world. http://www.southampton.ac.uk/ 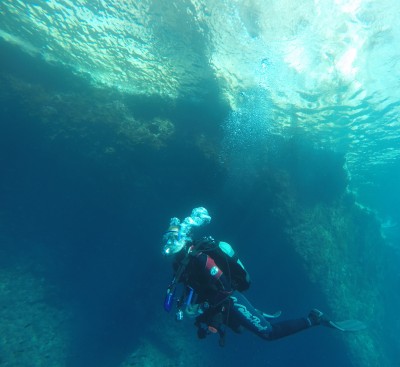 Caption: A diver inspects the formation of a tidal notch along the Karaburun Peninsula. 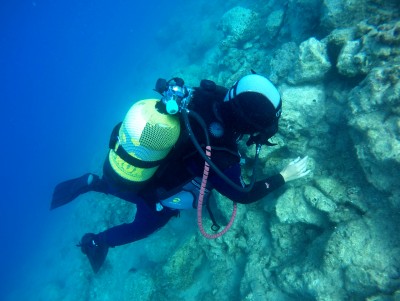 Caption: A diver inspects the rubble of a Roman marble quarry. 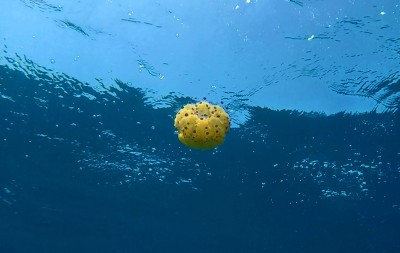 Caption: A jellyfish (Phacellophora camtschatica) in open water, indicators of the health of ecosystems. 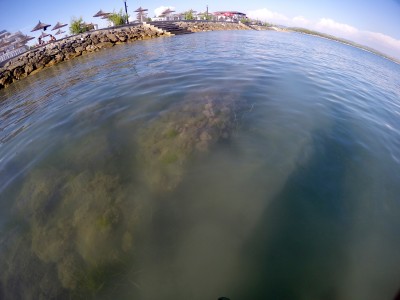 Caption: A submerged Roman wall within a few centimeters of the water's surface. 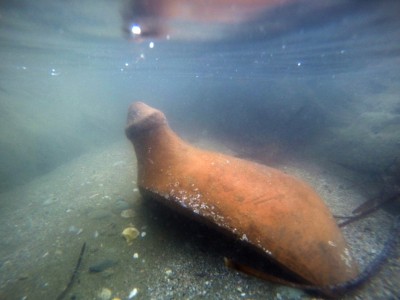 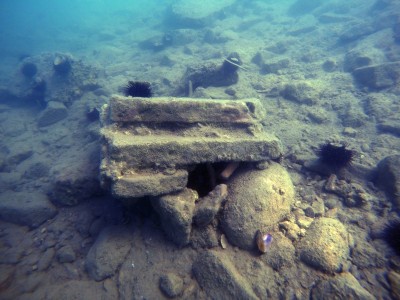 Caption: Roman bricks remain stacked among the rubble of an underwater structure. 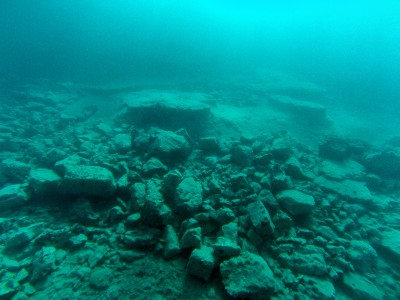 Caption: Rubble from a submerged wall. 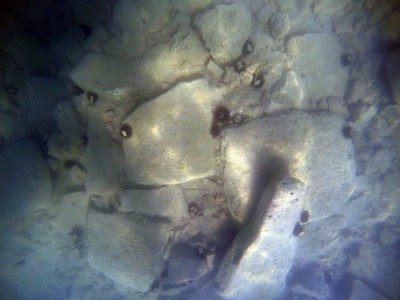 Caption: The remains of a submerged wall dating to the Roman period.