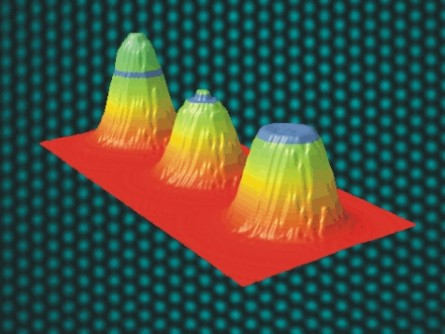 These three false-color images, from left, depict the density of cesium atoms in a superfluid (conducting) state, in a transition state and finally in an insulating state. The original sample consisted of a single-layer of cesium atoms that formed a sheet measuring 80 microns in diameter, barely visible to the naked eye. Green indicates the lowest density of atoms. Red indicates a high, constant density. Physicists call this a plateau, which University of Chicago scientists have observed for the first time. 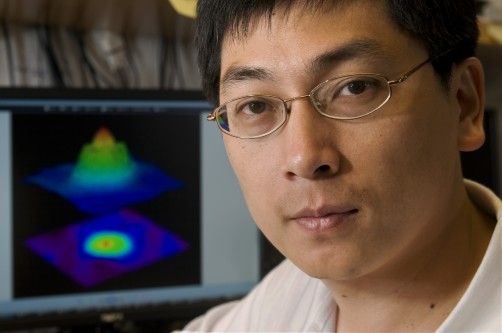 Cheng Chin, assistant professor in physics at the University of Chicago. Chin and his team published their latest ultracold research results in the Aug. 20, 2009, issue of Nature. Chin was the 2008 recipient of the Young Scientist Prize in Atomic and Molecular Physics, awarded by the International Union of Pure and Applied Physics. 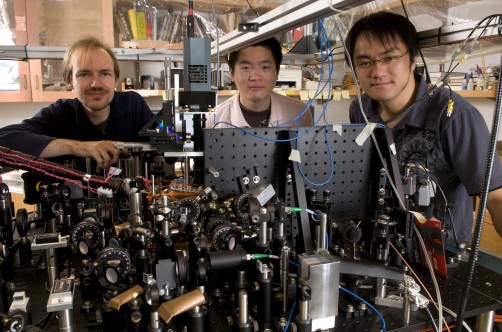 University of Chicago physicists with the experimental apparatus that permitted them to directly observe a group of atoms transform from a conducting state into an insulating state. From left, Grainger Postdoctoral Fellow Nathan Gemelke and graduate students Xibo Zhang and Chen-Lung Hung.

Newswise — University of Chicago physicists have, for the first time, directly observed a group of atoms transform from a conducting state into an insulating state.

“It opens up much richer phenomena to explore,” said Cheng Chin, an assistant professor in physics at the University. Chin’s team conducted the experiment as the first step in a project to simulate the dynamics of electrons in a solid. “How you can make the transition from a conducting material to a non-conducting material is difficult to conceive,” said Chin. But his team actually observed such a transition using super-cooled atoms to simulate the behavior of electrons. “It’s nearly impossible to resolve the dynamics of electrons,” Chin said, because they move from atom to atom in trillionths of a second. The Chicago physicists dodged this problem by cooling a single layer of cesium atoms to temperatures near absolute zero (minus 459.67 degrees Fahrenheit). Then they magnetically controlled the motion of the atoms on a millisecond time scale (thousands of a second). This is a billion times slower than electrons move, but the physics remains the same.

“We made a thin film of atoms, and then we watched how they distributed themselves inside our chamber.”

What they observed confirmed a prediction that another team of scientists made in 2000: While the atoms are in a superfluid state (conducting), they experience very little repulsive force between each other. When moving freely, these atoms can become compressed with the application of pressure.

“There’s a certain mobility when you apply a force. You can easily compress a conducting sample,” Chin said.

But when the Chicago researchers applied a magnetic field, initiating a much greater repulsive force between the atoms, they became jammed and could not be deformed. The atoms had entered an incompressible insulating state.