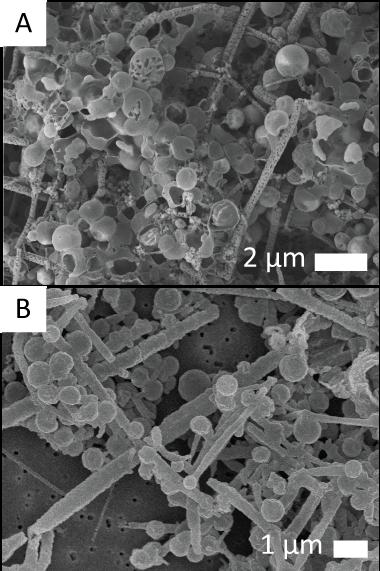 Scanning electron microscope images of organic biomorphs composed of filaments and spheres in pre-silicification conditions (A) and biomorphs with preserved original structures / morphologies / shapes (B) after two weeks of experimental silicification.

Newswise — Boulder, Colo., USA: For most of Earth's history, life was limited to the microscopic realm, with bacteria occupying nearly every possible niche. Life is generally thought to have evolved in some of the most extreme environments, like hydrothermal vents deep in the ocean or hot springs that still simmer in Yellowstone. Much of what we know about the evolution of life comes from the rock record, which preserves rare fossils of bacteria from billions of years ago. But that record is steeped in controversy, with each new discovery (rightfully) critiqued, questioned, and analyzed from every angle. Even then, uncertainty in whether a purported fossil is a trace of life can persist, and the field is plagued by "false positives" of early life. To understand evolution on our planet--and to help find signs of life on others--scientists have to be able to tell the difference.

New experiments by geobiologists Julie Cosmidis, Christine Nims, and their colleagues, published today in Geology, could help settle arguments over which microfossils are signs of early life and which are not. They have shown that fossilized spheres and filaments--two common bacterial shapes--made of organic carbon (typically associated with life) can form abiotically (in the absence of living organisms) and might even be easier to preserve than bacteria.

"One big problem is that the fossils are a very simple morphology, and there are lots of non-biological processes that can reproduce them," Cosmidis says. "If you find a full skeleton of a dinosaur, it's a very complex structure that's impossible for a chemical process to reproduce." It's much harder to have that certainty with fossilized microbes.

Their work was spurred by an accidental discovery a few years back, with which both Cosmidis and Nims were involved while working in Alexis Templeton's lab. While mixing organic carbon and sulfide, they noticed that spheres and filaments were forming and assumed they were the result of bacterial activity. But on closer inspection, Cosmidis quickly realized they were formed abiotically. "Very early, we noticed that these things looked a lot like bacteria, both chemically and morphologically," she says.

"They start just looking like a residue at the bottom of the experimental vessel," researcher Christine Nims says, "but under the microscope, you could see these beautiful structures that looked microbial. And they formed in these very sterile conditions, so these stunning features essentially came out of nothing. It was really exciting work."

Nims set about running the new experiments, testing to see if these abiotic structures, which they called biomorphs, could be fossilized, like a bacterium would be. By adding biomorphs to a silica solution, they aimed to recreate the formation of chert, a silica-rich rock that commonly preserves early microfossils. For weeks, she would carefully track the small-scale 'fossilization' progress under a microscope. They found not only that they could be fossilized, but also that these abiotic shapes were much easier to preserve than bacterial remains. The abiotic 'fossils,' structures composed of organic carbon and sulfur, were more resilient and less likely to flatten out than their fragile biological counterparts.

"Microbes don't have bones," Cosmidis explains. "They don't have skins or skeletons. They're just squishy organic matter. So to preserve them, you have to have very specific conditions"--like low rates of photosynthesis and rapid sediment deposition--"so it's kind of rare when that happens."

On one level, their discovery complicates things: knowing that these shapes can be formed without life and preserved more easily than bacteria casts doubt, generally, on our record of early life. But for a while, geobiologists have known better than to rely solely on morphology to analyze potential microfossils. They bring in chemistry, too.

The "organic envelopes" Nims created in the lab were formed in a high-sulfur environment, replicating conditions on early Earth (and hot springs today). Pyrite, or "fool's gold," is an iron-sulfide mineral that would likely have formed in such conditions, so its presence could be used as a beacon for potentially problematic microfossils. "If you look at ancient rocks that contain what we think are microfossils, they very often also contain pyrite," Cosmidis says. "For me, that should be a red flag: 'Let's be more careful here.' It's not like we are doomed to never be able to tell what the real microfossils are. We just have to get better at it."