While the deadly skin cancer has risen nationally for more than 30 years, its growth in Los Angeles County has slowed. 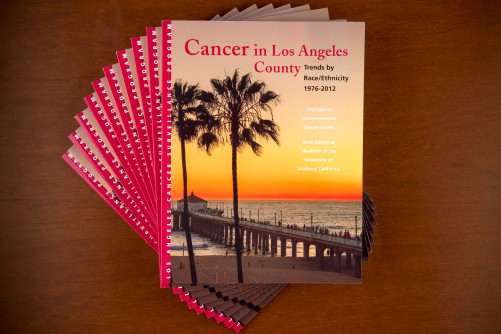 Newswise — The melanoma rate among white women living in Los Angeles is declining for the first time in 37 years, according to a new cancer report card administered by USC.

Between 2005 and 2012, white women experienced a 4 percent decrease in the rates of melanoma diagnoses. Latina, Filipina and Chinese women also experienced a slight decrease.

In comparison, the proportion of white male Angelenos developing the malignant form of skin cancer has slowed but is still on the rise, as has been the case since 1976. Between 2000 and 2005, their melanoma rate rose by 15 percent. Seven years later, the rate of increase was only 4 percent.

This data comes from “Cancer in Los Angeles County: Trends by Race/Ethnicity 1976-2012.” Released on Aug. 15, the book is based on all cancers diagnosed among Los Angeles County residents over the past 37 years — more than 1.3 million cases.

Melanoma accounts for only 1 percent of skin cancers, yet it is the reason for the majority of skin cancer deaths. Most people affected by the disease are white. Those who are fair-skinned and burn easily or individuals with a large number of moles are at higher risk.

One in 50 whites, 1 in 200 Hispanics and 1 in 1,000 blacks develops melanoma. Thus, whites are at higher risk of developing melanoma.

Ashley Wysong, assistant professor of clinical dermatology and director of Mohs (a relatively new surgical technique) and dermatologic surgery at the Keck School of Medicine of USC, shares her expertise and provides skin care advice.

AW: In fact, there has been a 619 percent increase since 1950. The majority of melanoma cases can be explained by a combination of genetics and ultraviolet exposure from the sun as well as artificial UV through tanning beds.

We also are seeing a worrisome increase in melanoma rates among adolescents and young adults.

Q: Why have skin cancer rates among Hispanics risen by almost 20 percent?

AW: Skin cancer is not just a problem for people with fair skin. Because skin cancer often is not of concern in patients with skin color, we often see delays in diagnosis and treatment, with associated higher rates of morbidity and death.

The cumulative effects of UV over a lifetime are associated with increased rates of most skin cancers. Efforts are being made to educate Latino, Asian, black, Native American and other ethnic communities about the importance of skin self-examination and skin cancer screening.

Q: If people are more likely to use SPF and have a better skin care regimen now compared to the 1970s, why are melanoma rates rising?

AW: The most common mistakes people make when applying sunscreen is:

When choosing a sunscreen:

• Individuals should look for sunscreens labeled as “broad spectrum,” which means that they have both UVA and UVB protection.• The sunscreens should be at least SPF 30.

When applying sunscreen lotion, you typically need to apply generously (a golf ball-sized amount) to the entire body. Sunscreen should be reapplied every two hours and after swimming or significant sweating.

To be honest, most people find it difficult to follow these recommendations for various reasons, myself included! Because of this, I often recommend to my patients to avoid sun exposure during peak UV hours of 10 a.m. to 4 p.m. and to invest in wide-brimmed hats, UV sunglasses and photoprotective clothing. Many clothing brands have started carrying UPF clothing (UPF is similar to SPF) that is comfortable, breathable and easy to wear.

Q: Melanoma is the deadliest type of skin cancer. What happens when it is caught early?

AW: When caught in the early stages, melanoma very rarely goes outside of the skin and is highly curable. Your dermatologist or dermatologic surgeon could surgically remove the cancer using local anesthesia.

Q: If I’m a redhead or if I freckle easily, should I be on high alert about skin cancer?

AW: Redheads, blondes and people that freckle easily often have less natural protection from the sun. Melanin, the natural UV protection found in the top layer of the skin, is present in lower amounts in light-skinned and light-haired individuals. Because of this, redheads, blondes and individuals that freckle easily have to be even more careful in the sun.

Q: How safe is tanning and the ointments used to tan?

AW: There is no such thing as a “safe” tan. Both baby oil and tanning oil are dangerous. In general, being outdoors without proper photoprotective clothing, hats, sunglasses or sunscreen increases one’s risk of developing melanoma and non-melanoma skin cancers. Tanning in and of itself, as well as freckles and “sun spots,” are signs of damage to the skin.

Baby oil provides no protection from the sun and may actually intensify the sun’s rays. The typical “tanning oil” has an SPF of 2 to 4, which provides very minimal protection from damaging UV radiation.

Q: What are the misconceptions and tips you would like to highlight?

AW: Unfortunately, there is a lot of misinformation out there about the use of sunscreen, leading individuals to avoid its use or to flock to “natural” or “herbal” sunscreens that have not been tested by the FDA. This is very risky and it’s important for individuals to be well-informed and to discuss these decisions with their dermatologist. Seeking shade, wearing protective clothing or hats and avoiding peak UV hours are always recommended.

Outdoor athletes are at increased risk for skin cancer due to long hours of exposure, often during peak hours of UV exposure. In addition, sweating may increase photodamage by intensifying the skin’s sensitivity to ultraviolet radiation and the risk of sunburn.