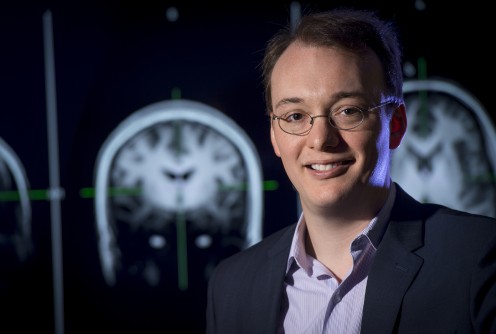 Newswise — Jarred Younger, Ph.D., director of the University of Alabama at Birmingham Neuroinflammation, Pain and Fatigue Lab, is available to discuss fibromyalgia from a research standpoint.

Younger is available by phone to discuss fibromyalgia further. Also, he is giving a talk on the top 10 scientific discoveries of fibromyalgia in the past year. The talk is Portland, Oregon this Saturday at 10:30am Pacific Time (12:30pm Central). There is a livestream, but there is a charge, and it covers the entire conference. https://www.ldnresearchtrust.org/conference-2017

Fibromyalgia is a chronic disorder that involves pain all over the body. This pain is present every day, is not related to injury or overuse, and tends to involve soft tissue such as muscle. Patients are sensitive to pressure, so that fairly light pushing on soft tissue can cause pain. Individuals with fibromyalgia almost always have significant daily fatigue that is not alleviated by rest, and they can have sensitivity to light, sound, or smells, as well as problems with thinking, concentration, and memory. The severity of pain can change from day-to-day in unpredictable ways, and individuals can have very bad days with no warning.

The causes fibromyalgia are unknown, though most researchers believe the central nervous system, brain and spinal cord, is hypersensitized so that normal messages from the body are amplified to the point of being painful. It is difficult and dangerous to access central nervous system tissue in living humans making it difficult to find all of the answers.

Fibromyalgia is possibly caused by a traumatic event to the central immune system, such as a viral or bacterial infection, exposure to environmental toxins, and maybe even a whiplash injury. The central immune system then becomes sensitized and releases chemicals that increase pain and cause fatigue. These chemicals are normally produced when someone is sick with the flu or other infection, but in fibromyalgia they may be produced at all times, causing a constant state of sickness.

How can it be managed?

There is currently no cure for fibromyalgia, but there are several treatments for managing it. There are three FDA-approved medications for fibromyalgia that can help some individuals. Two of those medications boost neurotransmitters that help reduce pain and can also improve mood if someone suffers from depression. The other medication slows down nerve firing so fewer pain messages are sent to the brain.

These medications can help, though the majority of people with fibromyalgia do not get adequate relief from symptoms from any of the medications. There are at least a dozen other medications that physicians may prescribe “off-label” to help with pain. While they can be helpful in some individuals, many fibromyalgia sufferers still have severe symptoms after treatment.

There are many non-pharmacologic treatments such as light exercise, water-based exercise, tai chi, and yoga that clinicians are likely to suggest either alone, or in combination with medications.

There are several fibromyalgia treatments in various stages of research testing. These experimental medications work in various ways to help fibromyalgia pain: by reducing inflammation in the brain, improving sleep, knocking down low-level viral infections, increasing vitamin levels, and activating the body’s own pain systems. Some physicians may prescribe these treatments, but many will want to wait until very large clinical trials (and maybe FDA approval) have been completed.

Any statistics surrounding it?

Fibromyalgia affects an estimated 2 percent of the U.S. population. Women are far more likely than men to be diagnosed with the condition, with approximately 6 percent of women in the U.S. having fibromyalgia. Fibromyalgia is most frequently diagnosed around the age of 40. Once someone has the condition, they are likely to stay the same or get worse over the following years. Roughly 25 percent improve over time with treatment.

What research is currently going on at UAB surrounding fibromyalgia?

UAB has several research projects about fibromyalgia that are ongoing: brain imaging, testing new treatments, and exploring possible causes of the disease.

Brain imaging studies are focusing on new ways to detect neuroinflammation, which is a possible cause of fibromyalgia. One scan measures temperature across the entire brain to find “hot spots” that may indicate inflammation, similarly to how body temperature is used to know when someone is sick. Another scan allows us to track immune cells from the body to see if they abnormally cross the blood-brain barrier to cause problems inside the brain.

Clinical trials are testing new treatments that can cross into the brain and calm down inflammation. And a new diagnostic technique is being developed using an injection called lipopolysaccharide to test if the immune system is sensitized in fibromyalgia.

UAB and researchers across the world continue to try to come up with the first objective diagnostic test or really effective treatment for fibromyalgia.