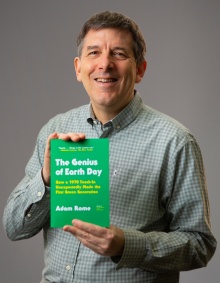 UB environmental historian Adam Rome is author of, "The Genius of Earth Day: How a 1970 Teach-In Unexpectedly Made the First Green Generation.”

Newswise — BUFFALO, N.Y. — In spring of 1970, millions of people across the United States took part in over 12,000 events to mark the first Earth Day, heeding the call of a senator from Wisconsin who felt that pollution and development were out of control and needed to be checked.

It was a sign of the times that so many Americans in so many different places cared: The U.S. Environmental Protection Agency did not yet exist. Gasoline contained lead. Skies over Birmingham, Alabama, were often brown, and smog clouded the streets of Los Angeles, California. In Cleveland, Ohio, the Cuyahoga River was so polluted that it burned in 1969, with flames lighting up an oil slick on its surface.

As Earth Day’s 50th anniversary approaches, the first observance in 1970 should stand as a story of hope for climate activists and others fighting environmental battles today, says Adam Rome, an environmental historian at the University at Buffalo who wrote a book documenting the history of the first Earth Day.

That’s because Earth Day in 1970 wasn’t just a feel-good demonstration that came and went. Rome describes it as an awakening: a series of locally planned events that catalyzed the modern U.S. environmental movement, solidifying a generation’s commitment to the environment and leading to major legislative victories like the Clean Air Act of 1970, the Clean Water Act of 1972 and the Endangered Species Act of 1973.

At the same time, the triumphs and lasting power of the first Earth Day spotlight the shortcomings of today’s environmental movement, Rome says.

One of Earth Day’s strengths in 1970 was that events were planned by local organizers, creating networks of skilled regional leaders who could be counted on to take further action on environmental issues years down the line. That kind of local reach is largely missing from climate and environmental activism today, Rome says.

“Change can’t come from within the DC Beltway alone,” he says. “It has to be grounded in grassroots organizing. Earth Day 1970 was a powerful organizing tool. It wasn’t just a demonstration — it empowered people to continue working for change.”

The need for a politically powerful movement is even greater now, Rome says.

“Government was critical in protecting the environment in the Earth Day era,” he says. “It still is essential in building a more sustainable society — and government can’t play that necessary role unless we break the partisan gridlock on environmental issues.”

Rome, PhD, is a professor of environment and sustainability in the UB College of Arts and Sciences, and author of the 2013 book, “The Genius of Earth Day: How a 1970 Teach-In Unexpectedly Made the First Green Generation.”

The first Earth Day was the brainchild of Gaylord Nelson, a Wisconsin senator who called for a nationwide environmental teach-in to take place on April 22, 1970.

As Rome recounts in his book, Nelson grew up in Clear Lake, Wisconsin. He swam, hiked, camped, skiied and shared the land with turtles and gophers as a boy, forming a connection with nature that he wanted to preserve for future generations.

As sprawl, strip mining, pesticides, industrial pollution and other threats endangered the wilderness everywhere, the senator grew frustrated with government inaction and appealed to the public with his idea for a teach-in, later rebranded as “Earth Day” by Nelson’s staff. The response was tremendous.

“The Genius of Earth Day” describes some of the myriad events that took place, some lasting a week or more, almost all organized locally.

In addition to hundreds of community celebrations, about 11,500 schools, colleges and universities held events, with speeches and lectures on topics ranging from a much-debated oil pipeline in Fairbanks, Alaska, to pollution in Birmingham, Alabama — home to some of the nation’s dirtiest air. Students in Springfield, Illinois, staged a funeral procession for the “dead Earth,” then delivered anti-pollution petitions to the state capitol.

In a joyful gesture, New York City closed Fifth Avenue to cars from 14th Street to 59th Street. The same was done on a stretch of 14th street. The roadways became a park. Kids played. Students protested. Bottles of Hudson River water were sold for 25 cents, with a warning that it was too dirty to drink. Workers from an architectural firm laid a quilt on the asphalt and picnicked in the sun.

In Albuquerque, New Mexico, some 300 demonstrators, led by a horseback rider and mariachi band, marched from a park to a sewage plant. They traversed one of the city’s poorest neighborhoods to call attention to the social injustice that exposed low-income communities to pollution and waste.

Reflecting on how Earth Day has changed since 1970, Rome says, “It’s lost something. In many communities, it’s more of a trade show or a thing for kids with a corporate-sponsored curriculum. The first Earth Day was soul-searching. It encouraged people to think creatively about how they could build a movement. I wish that our stock-taking every April 22 was profound — and it sometimes is, in some places.”

Though Nelson hired a national staff to coordinate tasks like promoting the teach-in and printing a newsletter, planning of events in different towns and cities took place almost completely at the local level. And that was Earth Day’s power, Rome says.

“One of the geniuses of Nelson’s approach was that he wasn’t a helicopter parent even though this was his baby,” Rome says. “He didn’t try to control everything people did at these events, literally 12,000 or 13,000 events across the country. He left it up to the local organizers to decide what Earth Day was going to be wherever they were.

“That allowed the local organizers to take ownership of the event, which made them more like small business owners rather than owners of a franchise. That turned out to be empowering, and there were tens of thousands of these local organizers.”

This decentralized planning effort helped Earth Day build a broad movement where many kinds of people felt empowered to make a difference, addressing key challenges the U.S. environmental movement is grappling with today, Rome says: The need to build strong, active networks of supporters at the local level, and the need to create a broad national coalition in support of environmental issues.

Because the planning of the first Earth Day took place at the local level, people in cities and towns across the country got to decide what issues to address through their events. What problems mattered most to their communities? Should industry speakers be invited? Should Earth Day be about education, or protest?

This effort transformed many organizers into lifelong environmental activists as they developed new skills, built networks of supporters and thought deeply about the environment.

Earth Day encouraged planners all over the U.S. to think about how degradation of the environment affected their families and communities, Rome says. Fishermen worried about detergent foam in rivers. Parents worried about children breathing polluted air. College students worried about the future of open spaces in a crowded world.

The environment became personal, and as a result, Earth Day built a broad coalition, contrasting with the partisan divisions of 2020, Rome says.

Rome argues that Earth Day’s local reach paved the way for major legislative victories in the years after, with grassroots pressure forcing local, state and national politicians to pay attention to conservation and pollution.

“Earth Day nurtured a generation of entrepreneurial activists who pushed for reform in politics, the business world, academia and the professions,” Rome says. “The Earth Day generation made a difference in Washington and at the grassroots — both immediately and for many years after 1970. We desperately need that breadth of commitment now.  In addition to committed political leaders and citizens, we need green accountants, green chemists, green designers, green buyers for Walmart, green venture capitalists, green engineers, green insurance risk evaluators, and much, much more.”