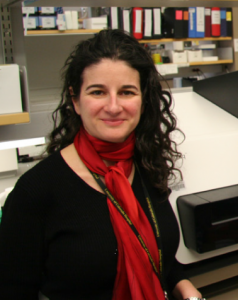 Newswise — Lung cancer treatment often pairs targeted therapies with genetic alterations driving the disease. This makes detecting these genetic alterations an essential step in diagnosis. In 2013, an expert panel made up of members of the College of American Pathologists, the International Association for the Study of Lung Cancer, and the Association for Molecular Pathology published guidelines describing the genetic tests that should be performed to evaluate a patient’s lung cancer. Now a similar expert panel updates these guidelines.

“There have been important changes since 2013. We’re discovering new genetic alterations driving lung cancer, new drugs to target these alterations, and are refining our use of tests to find these alterations in individual patients,” says Dara Aisner, MD, PhD, investigator at the University of Colorado Cancer Center, molecular pathologist at CU School of Medicine Department of Pathology, and one of the panel experts.

One major change is the recommendation to test for alterations to the gene ROS1 in all cases of lung adenocarcinoma, which make up about half of all cases of non-small cell lung cancer. The recommendation is due in large part to a growing body of evidence demonstrating the clinical benefit of treating patients whose tumors harbor this alteration with targeted therapy.

“In clinical practice, many forward-looking centers have already been testing for and treating ROS1 in lung cancer, but putting it into formal guidelines helps to encourage practitioners everywhere to include it in their targets for testing,” Aisner says.

Another update to the 2013 guidelines is the use of cell-free DNA, also called circulating tumor DNA, to test for genetic alterations when appropriate tissue for testing is unavailable.

“People have been using circulating tumor DNA to try to make a few kinds of decisions – this is one of the first formal guidelines to endorse that use,” Aisner says.

On the plus side, Aisner points out, testing via circulating tumor DNA returns very few false-positives – when a test discovers DNA with a cancer-causing genetic change, it is strong evidence that this alteration is, in fact, present in the patient’s cancer. However, tests that use circulating tumor DNA also have a high rate of false-negatives, meaning that even if a test of this type fails to discover altered DNA, it may still be present in a patient’s cancer.

In addition to the use of circulating tumor DNA, the recommendations include another option for molecular testing with very little tissue, namely the expanded use of cytology specimens.

“Many lung cancer patients have their diagnosis made by fine needle aspirate – doctors extract cells via a long needle. This allows pathologists to diagnose the existence of cancer, but the sample tends to be very small, and there’s been some debate about how useful that small amount of material can be for molecular testing,” Aisner says.

One approach with this kind of material is to use what is called a cytology cell block, in which the extracted cells are treated similar to a biopsy. Another approach is to place extracted cells directly on a slide, in what is called a smear preparation. The previous guidelines specifically recommended the use of only cytology cell blocks for testing, but the new guidelines endorse using the smear preparation as well.

“This is an important step forward, as it means that for some patients, testing will be possible when it wasn’t before,” Aisner says. In fact, the Aisner lab has been instrumental in showing the benefit of using cytology smear preparations for molecular testing in lung cancer.

“The FDA approved a combination treatment against BRAF alterations in lung cancer and, clinically, many people are starting to include BRAF in the list of tests. This is a case of technology moving faster than our ability to complete systematic reviews of it,” Aisner says.

Full guidelines are published in the Archives of Pathology and Laboratory Medicine.