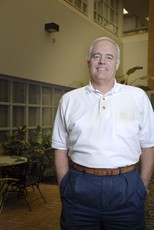 Dr. Peter Clark, associate professor of chemical and biological engineering at The University of Alabama

Dr. Peter Clark of The University of Alabama offers opinions on whether gas prices will continue to fall this holiday season, whether more drilling will mean cheaper prices at the pump, how a new President will affect gas prices, and whether falling gas prices will fuel holiday spending.

Newswise — With oil prices hitting record levels in 2008 and the economy plunging, what does the holiday season hold for those wanting to drive to visit family?

Gasoline prices will continue to drop. The price of oil has dropped into the $60 to $70 a barrel range, and therefore there is no real price pressure on gasoline prices for the moment," explained Dr. Peter Clark, associate professor of chemical and biological engineering at The University of Alabama.

"For the holiday season, gas prices should stay about the same as they are today or even a little lower," said Clark. "Lower gas prices will probably encourage people to travel, although I've been encouraging conservation because if consumers would lower their gasoline usage by 5 percent, the price of gasoline would drop significantly."

Clark discussed how OPEC's upcoming meeting may somewhat impact the price of oil, especially if OPEC reduces production. Although, a reduction in production will take time to actually impact the system because of current supply levels, he said.

Clark noted that world demand for gas and oil has decreased. With the global economy down, people throughout the world are using less energy, he said. This is part of the reason OPEC is considering reducing production.

A new president taking office will not immediately impact the price of oil and gas, Clark predicts. The two candidates have very different views on how to solve the nation's dependency on oil, but both plans will take time to enact and results will not be immediate, he said.

"Even if new drilling began immediately, which I think we should do, it will be five to ten years before we see that oil production. This doesn't mean we should not follow this plan; consumers just need to realize the length of time that it takes to see results. Drilling will also help keep the price of oil down," said Clark.

"I believe energy independence will come from additional conservation and alternative methods for powering vehicles," he said.