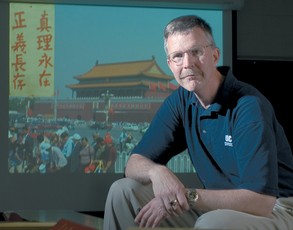 Chris Reardon, associate professor of political science at the University of New Hampshire.

Newswise — Chinese foreign economic policy expert Chris Reardon, associate professor of political science at the University of New Hampshire, is available to discuss China's recent stock market drop and the larger implications of the increasing influence of China's impact on the global economy.

"It is too early to tell whether the dramatic drop in stock prices in Shanghai and Shenzhen triggered subsequent drops in Tokyo, Wall Street, FTSE. Reportedly, Chinese investors were spooked by pending economic legislation — such as the imposition of a capital gains tax — put forward by the Chinese State Council. Once those rumors were disavowed, the rest of the world stock exchanges appear to have rebounded," Reardon said.

"However the more interesting phenomenon is the emphasis on China's impact on the global economy. Whether it be the price of raw materials, fluctuating Chinese capital markets, or the billion dollars in Chinese reserves, the world marketplace is increasingly influenced by amazing Chinese growth rates," he said. "Unfortunately, the United States and the other members of the G-7/8 nations are unwilling to accept the growing importance of the Chinese economy. After this week, they might have to admit a new member."

Reardon's current research focuses on the elite strategies in opening China's economy to the outside world in the 1980s. He has published "The Reluctant Dragon: Crisis Cycles in Chinese Foreign Economic Policy," and translated two volumes of Chinese foreign economic policy documents. He is a research associate at the John King Fairbanks Center for East Asian Studies at Harvard University and coordinator of Asian Studies at the University of New Hampshire. He is fluent in Mandarin Chinese.