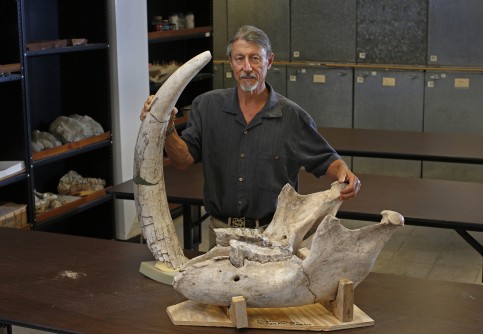 New Mexico State University biology professor Peter Houde poses for a photo with the tusk and mandible of a Stegomastodon in the Vertebrate Museum in Foster Hall. A stegomastodon is one of three species of proboscideans that co-inhabited the ancient Rio Grande Valley during the Pleistocene. 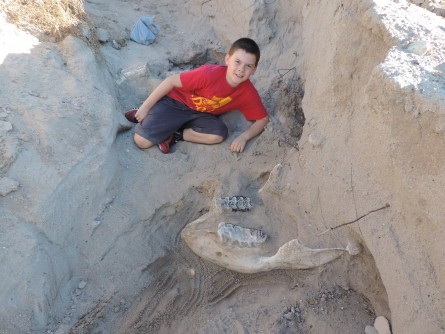 Jude Sparks poses with the jawbone of a stegamastodon, an ancient ancestor of the elephant, that he discovered while hiking in the desert in Las Cruces with his family. The Sparks family contacted NMSU biology professor Peter Houde, who enlisted students to help dig up the fossil in May. 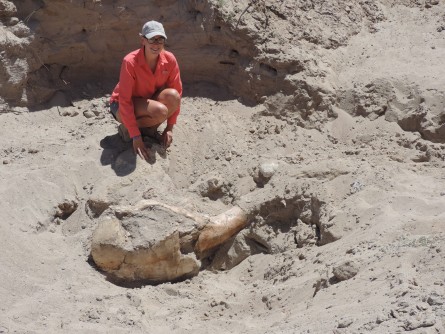 “I was running farther up and I tripped on part of the tusk,” said Jude Sparks, who had been hiking in the desert with his parents and testing walkie-talkies with his brothers when he came face-to-face with the fossil. “My face landed next to the bottom jaw. I looked farther up and there was another tusk.”

The Sparks family contacted NMSU biology professor Peter Houde in November after seeing him interviewed in a YouTube video about a similar fossil found several years ago in a Mesquite quarry about 10 miles south of campus.

“A stegomastodon would look to any of us like an elephant,” said Houde. “For the several types of elephants that we have in the area, this is probably one of the more common of them. But they’re still very rare. This may be only the second complete skull found in New Mexico.”

After the family contacted Houde, the jaw and two pieces of tusk were taken to the Vertebrate Museum at NMSU. In May, the family joined a team of students and professors who worked for about a week to carefully unearth the skull.

Houde explained it took some months to get permission to dig on the property from the landowner, who requested the site remain a secret. It also took time get the special chemicals needed to properly preserve the fossils. The College of Arts and Sciences provided funding for the process.

Houde applauded the Sparks family’s decision to do the right thing in contacting him about their find. He encourages others who might come across fossils to reach out to an expert rather than try to dig it up on their own.

“As you can imagine, when people find out about these things, they might be tempted to go out there and see what they might find themselves and tear up the land or they might hurt themselves,” Houde said. “To be quite honest, all these fossils from this area are radioactive and especially for children, not something you would want in your home.”

Houde estimates the jaw weighs about 120 pounds and the entire skull as little as a ton. And while the skull may appear to be strong, it is quite delicate.

“The upper part of the skull is deceiving. It’s mostly hollow and the surface of the skull is eggshell thin,” Houde said. “You can imagine an extremely large skull would be very heavy for the animal if it didn’t have air inside it to lighten it up just like our own sinuses. That makes the thing extremely fragile and the only thing holding it together is the sediment surrounding it.

“In fact when the sediments are removed from the sides of them, they start to fall apart immediately and literally fall into tiny, tiny bits. It has to be done carefully by somebody who knows how to go about doing it. It is a very deliberate process that takes a little bit of time.”

During the weeklong extraction process, 10 to 12 people helped at different times with the excavation of the stegomastodon skull. NMSU geology major Danielle Peltier assisted with painstaking process of gently brushing the last bits of dirt from the skull and tusk and applying chemical hardeners to ensure the ancient bones remained intact. Acting like plastics, the chemicals harden and restore the strength that would otherwise be present in the bone as protein.

“As we were brushing away the fossil as soon as we removed the sediment we needed to put a type of hardener on there to preserve the structural integrity, otherwise it would just crumble after a few days being left in the sun,” Peltier said.

Peltier, who will graduate in May 2018, plans to enter a Ph.D. track program and pursue a career as a paleontologist and academic.

“I’ve been fortunate to do field work in Las Cruces, at White Sands and in Kenya,” Peltier said. “It’s amazing to be able to travel, meet remarkable people and realize that you’re the first person to be looking at something that might be anywhere from 5,000 to 3 billion years old.”

After the skull was unearthed, the NMSU team carefully coated the fossil with plaster and placed wood braces to protect and support it. The skull was lifted from the dig site by a front-end loader and placed on a flatbed truck for the trip back to the university.

While the process to study and reconstruct the skull, jaw and tusks will take years to complete, Houde says the stegomastodon fossil will eventually go on display.

“I have every hope and expectation that this specimen will ultimately end up on exhibit and this little boy will be able to show his friends and even his own children, look what I found right here in Las Cruces.”