When severe weather threatens, meteorologists trained by Mississippi State University are on the job. Close to 70 percent of U.S. broadcast meteorologists have direct ties to MSU. 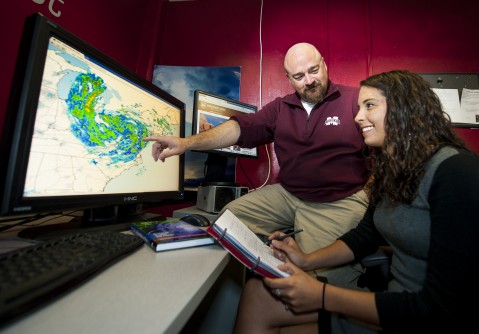 Instead of an early snowfall this time of year, farmers along the eastern seaboard are dealing with... (read more)

Newswise — As Hurricane Sandy pummels the East Coast, Mississippi State University meteorology experts are some of the most trusted voices in the national conversation about natural disaster education and awareness.

When people are aware of a coming storm and understand its dangers and its capacity to obstruct electricity, transportation, water and other everyday comforts, fewer people die.That’s the goal for MSU climatology and disaster relief experts when they offer their expertise to outside media outlets and inside their classrooms, according to Charlie Wax, professor of meteorology and climatology at MSU.

“Our program is all about education and awareness: that’s what brings down the death rates,” said Wax, who is considered an expert climatologist. “Having a general understanding of the risks associated helps you be more prepared.”

“If there’s a discussion about weather, Mississippi State is part of that discussion,” Brown explained. “That just says it all: Our program here is big, and it’s nationally known, and it’s very well respected. Our graduates are doing very good stuff.”

The meteorology program, just one part of the Department of Geosciences at MSU, keeps careful records of its graduates, and they’re doing well, Wax said.

Mississippi is an epicenter for severe weather, and MSU meteorology professors are quick to use actual weather patterns as teaching tools for students. Even Hurricane Sandy, though it’s directly impacting the U.S. East Coast, is also impacting Mississippi, Brown said.“If you notice the counterclockwise spin of the storm, the nice northerly winds from Canada are keeping us cool right now, and the warm air off the Gulf Stream is going right into New York,” he said.

Not only are meteorology students learning from storms as they intensify and dissipate, U.S. planners and media outlets are quick to call MSU climatologists when severe weather is on the horizon.

While MSU severe weather experts are being quoted in a variety of Northeastern media as Hurricane Sandy hits, this is not the first time, Wax noted.

After MSU-trained meteorologists from the National Weather Service offices in Jackson, Memphis, Tenn., and Birmingham, Ala., predicted the severe weather outbreak on April 27, 2011, broadcast meteorologists all over the South warned the public, Wax said.

The National Weather Association meeting in October 2011 credited MSU meteorologists’ “timely warnings” and “accurate dissemination of information” as the reason more people did not die from the outbreak of tornadoes.

“Without the timely warnings, the lives lost may have doubled or tripled. Each one of those meteorologists graduated from Mississippi State,” Wax said.

The program has grown over the years as the need for experienced, well-educated meteorologists has grown, Wax said.

“Our meteorology programs within our department are continuing to show steady growth with the profession, and we are compliant with all national standards.

To learn more about meteorology at MSU, go to http://www.geosciences.msstate.edu.