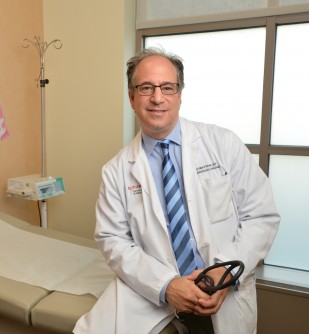 Newswise — New Brunswick, N.J. – May 17, 2017 – Pediatric and young adult patients whose Hodgkin lymphoma has recurred or is resistant to initial treatment can achieve remission and even cure with secondary treatments. Secondary treatment with gemcitabine-based chemotherapies followed by a stem cell transplant utilizing the patient’s own stem cells can result in improved outcomes for this patient population. Investigators from the Children’s Oncology Group, including Richard Drachtman, MD, clinical section chief of pediatric hematology/oncology at Rutgers Cancer Institute of New Jersey, wanted to explore the safety and response rate when two of these chemotherapy drugs are combined.   The work focuses on gemcitabine and brentuximab vedotin and is being presented as part of a poster presentation at the American Society of Clinical Oncology (ASCO) Annual Meeting next month in Chicago. Dr. Drachtman, who is also a professor of pediatrics at Rutgers Robert Wood Johnson Medical School, shares more:

Q: Why is this topic important to explore?

A: Despite newer approaches and therapies, refractory and relapsed Hodgkin disease remains a challenge.

Q: What prompted investigators to examine this combination in particular?

A: There are currently clinical trials examining response rates for a combination of therapies that already have some benefit when given by themselves. We already know that nine percent of patients with Hodgkin lymphoma will have a complete response when treated with gemcitabine. For those with Hodgkin lymphoma that is resistant to initial therapy or has recurred, 34 percent will have their cancer disappear when treated with a drug known as brentuximab vedotin. We hypothesized that by combining these two treatments, we would see the cancer disappear in at least 60 percent of these patients.

Q:  How was the study structured?

A: Between April 2013 and August 2016, 42 patients aged 30 or younger were enrolled (median age 17.4 years). Thirty-five patients had primary refractory disease or very early relapse. Participants were given a regimen of gemcitabine and brentuximab vedotin along with a glycoprotein that stimulates stem cell growth. The median duration of therapy was four, 21-day cycles. Patients were evaluated after every two cycles.

Q:  What are the implications of these findings?

A: These findings support further examination of this treatment combination. Results of future clinical trials testing these agents could lead to the development of additional therapy options for this patient population.