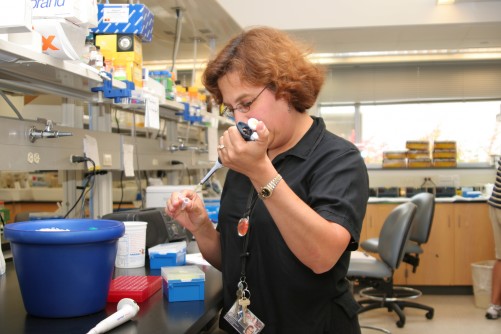 The common gut bacteria Bacteroides may derive an advantage from an ability to use aerobic and anaerobic respiration.

Newswise — Troy, N.Y. – Probiotic yogurts and pills promise better health, but the bacteria we ingest find a complex and challenging environment when they enter our gut. Food sources shift with every meal we eat, and the threat of pathogens is ever-present. In this competitive landscape, there’s a clear winner already on the field: the genus Bacteroides makes up 30 percent of the bacteria in the human gut, the single most abundant genus.

“Bacteroides are a successful bacterium in our gut microbiome. By offering metabolic capabilities that humans don’t have, it helps us to obtain important nutrients. So why are Bacteroides so resilient? If we can understand their success, it will ultimately allow us to design probiotic formulations for human health and aid patients with an imbalance of gut bacteria,” said Blanca Barquera, an associate professor of biological sciences at Rensselaer Polytechnic Institute and lead researcher on a new project investigating Bacteroides.

With support from a four-year $3 million grant from the National Institutes of Health, Barquera and a team including researchers at Tufts University and Harvard Brigham and Women’s Hospital are examining evidence that Bacteroides can create energy with and without oxygen by using aerobic and anaerobic respiration, an unusual feature among many human gut bacteria. Understanding Bacteroides’ ability to obtain energy may explain the bacteria’s competitive advantage over other species in the gut, the specific locations for Bacteroides in the gut, and how Bacteroides helps to create a favorable environment for other bacterial species, fostering a multi-species ecology in the intestines.

“We think that anaerobic and anaerobic respiration gives Bacteroides a huge advantage, because they have more opportunities to more efficiently convert dietary nutrients and that means they can out-compete the other bacteria,” said Barquera, a member of the Rensselaer Center for Biotechnology and Interdisciplinary Studies (CBIS).

Deepak Vashishth, director of CBIS, said the project is an ideal fit for the capabilities of the center.

“Dr. Barquera’s research, which includes biochemists, microbiologists, and bacteriologists working together to increase our understanding of the human gut microbiome, represents a new approach for improving human health,” said Vashishth. “The interdisciplinary infrastructure we have developed at the Rensselaer biotech center puts us in a leadership position in this domain, and I eagerly anticipate the results of this work.”

Many primitive organisms, including some species of gut bacteria, are capable of generating energy only through substrate level phosphorylation, which yields less energy than oxygen-intensive aerobic respiration, or through anaerobic respiration using other terminal electron acceptors. Bacteroides was believed to be exclusively anaerobic until research by Michael Malamy, a Tufts University professor and member of the research team, discovered evidence of a more complex respiration pathway that may allow complete aerobic respiration.

In their research, Barquera, Malamy, and Laurie Comstock, a Harvard associate professor, team member, and Rensselaer graduate, will characterize anaerobic and aerobic respiration in Bacteroides, enumerating the proteins the bacteria uses for respiration, how they function, and what advantages they confer to the bacteria.

“Medical research points to correlations between gut bacteria and mental health, diabetes, and many diseases, but we need more information than that,” said Barquera. “For a greater understanding of how bacteria like Bacteroides impact our health, we need to understand how they eat, live, and interact at the fundamental level of biochemistry and microbiology. That’s what this research will accomplish.”

Barquera’s research fulfills The New Polytechnic, an emerging paradigm for higher education which recognizes that global challenges and opportunities are so great they cannot be adequately addressed by even the most talented person working alone. Rensselaer serves as a crossroads for collaboration — working with partners across disciplines, sectors, and geographic regions — to address complex global challenges, using the most advanced tools and technologies, many of which are developed at Rensselaer. Research at Rensselaer addresses some of the world’s most pressing technological challenges — from energy security and sustainable development to biotechnology and human health. The New Polytechnic is transformative in the global impact of research, in its innovative pedagogy, and in the lives of students at Rensselaer.