Exploring the Science of Acupuncture 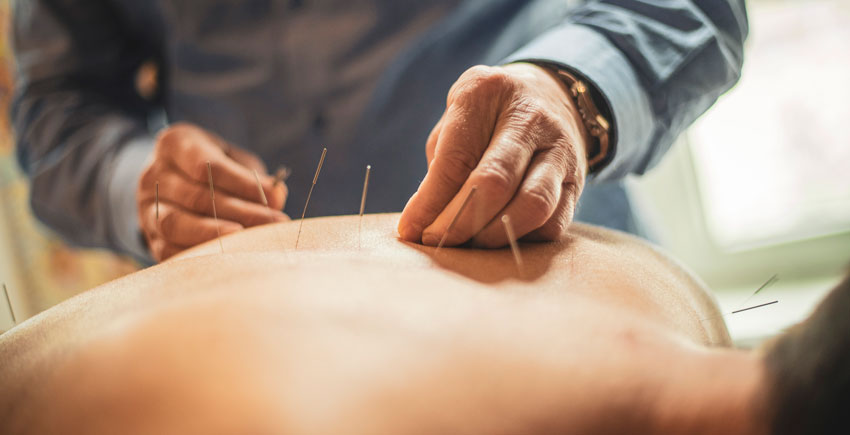 Newswise — Acupuncture is a traditional Chinese technique that has been used for millennia to treat chronic pain and other health problems associated with inflammation, yet the scientific basis of the technique remains poorly understood.

Now, a team of researchers led by neuroscientists at Harvard Medical School has elucidated the underlying neuroanatomy of acupuncture that activates a specific signaling pathway.

In a study conducted in mice and published Oct. 13 in Nature, the team identified a subset of neurons that must be present for acupuncture to trigger an anti-inflammatory response via this signaling pathway. The scientists determined that these neurons occur only in a specific area of the hindlimb region—thus explaining why acupuncture in the hindlimb works, while acupuncture in the abdomen does not.

“This study touches on one of the most fundamental questions in the acupuncture field: What is the neuroanatomical basis for body region, or acupoint, selectivity?” said lead investigator Qiufu Ma, HMS professor of neurobiology at Dana-Farber Cancer Institute.

One area of particular interest to the research team is the so-called cytokine storm—the rapid release of large quantities of cytokines that frequently drives severe, systemic inflammation, and can be triggered by many things, including COVID-19, cancer treatment, or sepsis.

“This exuberant immune response is a major medical problem with a very high fatality rate of 15 percent to 30 percent,” Ma said. Even so, drugs to treat cytokine storm are lacking.

In recent decades, acupuncture has been increasingly embraced in Western medicine as a potential treatment for inflammation. In this technique, acupoints on the body’s surface are mechanically stimulated, triggering nerve signaling that affects the function of other parts of the body, including organs.

In a 2014 study, researchers reported that electroacupuncture, a modern version of traditional acupuncture that uses electrical stimulation, could reduce cytokine storm in mice by activating the vagal-adrenal axis—a pathway wherein the vagus nerve signals the adrenal glands to release dopamine. In a study published in 2020, Ma and his team discovered that this electroacupuncture effect was region specific: It was effective when given in the hindlimb region, but did not have an effect when administered in the abdominal region. The team hypothesized that there may be sensory neurons unique to the hindlimb region responsible for this difference in response.

In their new study, the researchers conducted a series of experiments in mice to investigate this hypothesis. First, they identified a small subset of sensory neurons marked by expression of the PROKR2Cre receptor. They determined that these neurons were three to four times more numerous in the deep fascia tissue of the hindlimb than in the fascia of the abdomen.

In a final experiment, the scientists explored the distribution of the neurons in the hindlimb. They discovered that there are considerably more neurons in the anterior muscles of the hindlimb than in the posterior muscles, resulting in a stronger response to electroacupuncture in the anterior region. “Based on this nerve fiber distribution, we can almost precisely predict where electrical stimulation will be effective and where it will not be effective,” Ma explained.

Together, these results provide “the first concrete, neuroanatomic explanation for acupoint selectivity and specificity,” Ma added. “They tell us the acupuncture parameters, so where to go, how deep to go, how strong the intensity should be.” He noted that while the study was done in mice, the basic organization of neurons is likely evolutionarily conserved across mammals, including humans.

However, an important next step will be clinical testing of electroacupuncture in humans with inflammation caused by real-world infections such as COVID-19. Ma is also interested in exploring other signaling pathways that could be stimulated by acupuncture to treat conditions that cause excessive inflammation. “We have a lot of tough chronic diseases that still need better treatments,” he said, such as inflammatory bowel syndrome and arthritis. Another area of need, he added, is excessive immune reactions that can be a side effect of cancer immunotherapy.

Ma hopes that his research will ultimately advance scientific understanding of acupuncture and provide practical information that can be used to improve and refine the technique.

The work was primarily supported by the National Institutes of Health (grant R01AT010629), and partially supported by Harvard/MIT Joint Research Grants Program in Basic Neuroscience and the Wellcome Trust (grant 200183/Z/15/Z). For further information on salary support for the researchers, please refer to the paper.