A reconstruction of Titanotaria orangensis, a 6-7-million-year-old tuskless walrus from Orange County by Justin Santos 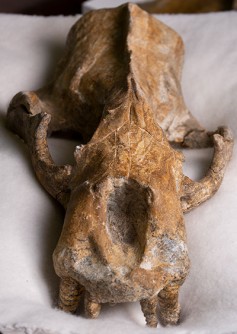 The skull of Titanotaria orangensis, a 6-7-million-year-old tuskless walrus from Orange County. 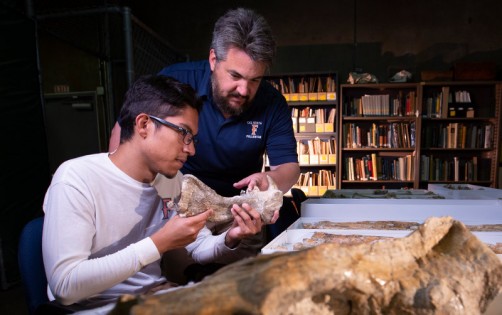 Geology alumnus Isaac Magallanes, left, and faculty mentor James Parham examine the specimen, which represents one of the most complete known fossil walrus skeletons in the world.

Newswise — Cal State Fullerton (CSUF) paleontologists have described a new genus and species of walrus and named it after CSUF Titans and Orange County, where the extinct, tuskless fossil was discovered.

The hefty-sized walrus fossil — more than 10-feet long, about 1,200 pounds and 6 to 7 million years in age — is named Titanotaria orangensis and represents one of the most complete known fossil walrus skeletons in the world, said Cal State Fullerton geology alumnus Isaac Magallanes.

As an undergraduate, Magallanes identified and studied the prehistoric adult male walrus under the mentorship of paleontologist James Parham, associate professor of geological sciences.

Their research is described in the paper, "A New Tuskless Walrus from the Miocene of Orange County, California, With Comments on the Diversity and Taxonomy of Odobenids," published on Oct. 12 in PeerJ-The Journal of Life and Environmental Science, a peer-reviewed open-access scientific journal.

"By looking at the distinguishing characteristics of the fossil walrus' skull and skeleton, we were able determine its evolutionary relationships among living and fossil walruses," said Magallanes, the paper's lead author.

Magallanes, who earned his bachelor's degree in 2017, is now a geological sciences graduate student at the University of Florida. Parham, Cal State Fullerton alumnus Gabriel-Philip Santos '18 (M.S. geology) who is the paleontology collections manager at the Alf Museum in Claremont, and Jorge Velez-Juarbe, a former postdoctoral scholar at CSUF and now marine mammal curator at the Natural History Museum of Los Angeles County, are the paper's co-authors.

The walrus fossil was found in 1993 on the site where Saddleback Church is built in Lake Forest. The area is part of a prominent geological rock formation layer known as the Oso Member from the Capistrano Formation, near Lake Forest and Mission Viejo.

The study is significant because it highlights the evolutionary history of a recognizable group of marine mammals, known as pinnipeds — seals, sea lions and walruses — in which climate and environmental changes had drastic impacts on biodiversity, the researchers noted.

The researchers' evolutionary analysis showed that during the last 16 million years, the diversity and geographic distribution of fossil walruses was much different than today.

When the Titanotaria walrus lived, there were several species of walruses in Orange County. Today, there are none. The only living species is Odobenus rosmarus with two distinctive and enormous tusks that live in the icy waters of the Arctic Ocean, Parham explained.

"Our study shows that there may have been as many as nine species of walruses living at the same time in the Northern Pacific," said Parham, adding that walruses once lived as far south as Baja California. "Most people don’t know that not all walruses had tusks and some had four tusks, both upper and lower."

Magallanes, who as a boy was captivated with paleontology, and all things dinosaurs and "Jurassic Park," became even more intrigued about walruses as he dug deeper into their ancient past.

"What I found fascinating about walruses are the various tooth morphologies they developed throughout their history," he said. "Since the modern walrus is recognized by its two giant tusks, it was interesting to find out that walruses over the ages had even weirder teeth arrangements."

The research experience gave Magallanes the opportunity to learn more about the prehistoric past of Southern California and present his project at conferences, including in Dallas and Denver, and at an international meeting in Washington, D.C. In 2016, he won an award for best undergraduate research at the local Geological Society of America meeting in Ontario. He also spent two summers excavating fossils in Panama.

After he completes his master's degree in May, Magallanes plans to pursue a doctorate, and a career in academia as a professor and researcher in geology and paleontology.

Caption: A reconstruction of Titanotaria orangensis, a 6-7-million-year-old tuskless walrus from Orange County by Justin Santos 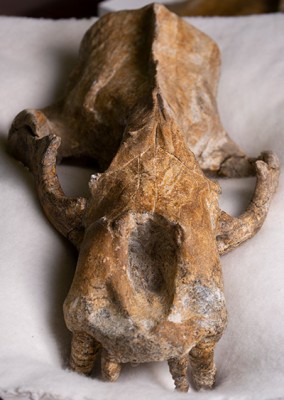 Caption: The skull of Titanotaria orangensis, a 6-7-million-year-old tuskless walrus from Orange County. 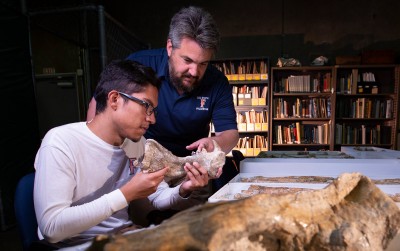 Caption: Geology alumnus Isaac Magallanes, left, and faculty mentor James Parham examine the specimen, which represents one of the most complete known fossil walrus skeletons in the world.