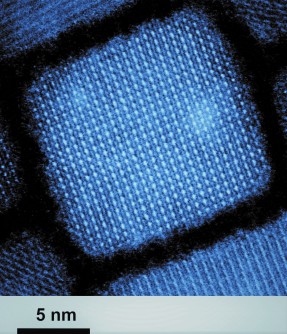 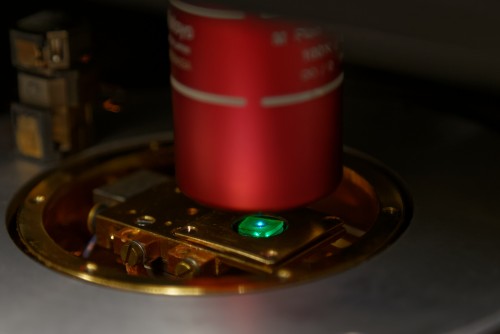 Newswise — An international team of researchers from ETH Zurich, IBM Research Zurich, Empa and four American research institutions have found the explanation for why a class of nanocrystals that has been intensively studied in recent years shines in such incredibly bright colours. The nanocrystals contain caesium lead halide compounds that arrange themselves in a perovskite crystal structure.

Three years ago, Maksym Kovalenko, a professor at ETH Zurich and group leader at Empa, succeeded in creating nanocrystals – or quantum dots, as they are also known – from this semiconductor material. “These tiny crystals have proved to be extremely bright and fast emitting light sources, brighter and faster than any other type of quantum dot studied so far,” says Kovalenko. By varying the composition of the chemical elements and the size of the nanoparticles, he also succeeded in producing a variety of nanocrystals that light up in the colours of the whole visible spectrum. These quantum dots are thus also being treated as components for future light-emitting diodes and displays.

In a study published in the most recent edition of the scientific journal “Nature”, the international research team examined these nanocrystals individually and in great detail. The scientists were able to confirm that the nanocrystals emit light extremely quickly. Previously-studied quantum dots typically emit light around 20 nanoseconds after being excited when at room temperature, which is already very quick. “However, caesium lead halide quantum dots emit light at room temperature after just one nanosecond,” explains Michael Becker, first author of the study. He is a doctoral student at ETH Zurich and is carrying out his doctoral project at IBM Research.

Understanding why caesium lead halide quantum dots are not only fast but also very bright entails diving into the world of individual atoms, light particles (photons) and electrons. “You can use a photon to excite semiconductor nanocrystals so that an electron leaves its original place in the crystal lattice, leaving behind a hole,” explains David Norris, Professor of Materials Engineering at ETH Zurich. The result is an electron-hole pair in an excited energy state. If the electron-hole pair reverts to its energy ground state, light is emitted.

Under certain conditions, different excited energy states are possible; in many materials, the most likely of these states is called a dark one. “In such a dark state, the electron hole pair cannot revert to its energy ground state immediately and therefore the light emission is suppressed and occurs delayed. This limits the brightness”, says Rainer Mahrt, a scientist at IBM Research.

The researchers were able to show that the caesium lead halide quantum dots differ from other quantum dots: their most likely excited energy state is not a dark state. Excited electron-hole pairs are much more likely to find themselves in a state in which they can emit light immediately. “This is the reason that they shine so brightly,” says Norris.

The researchers came to this conclusion using their new experimental data and with the help of theoretical work led by Alexander Efros, a theoretical physicist at the Naval Research Laboratory in Washington. He is a pioneer in quantum dot research and, 35 years ago, was among the first scientists to explain how traditional semiconductor quantum dots function.

As the examined caesium lead halide quantum dots are not only bright but also inexpensive to produce they could be applied in television displays, with efforts being undertaken by several companies, in Switzerland and world-wide. “Also, as these quantum dots can rapidly emit photons, they are of particular interest for use in optical communication within data centres and supercomputers, where fast, small and efficient components are central,” says Mahrt. Another future application could be the optical simulation of quantum systems which is of great importance to fundamental research and materials science.

ETH professor Norris is also interested in using the new knowledge for the development of new materials. “As we now understand why these quantum dots are so bright, we can also think about engineering other materials with similar or even better properties,” he says.