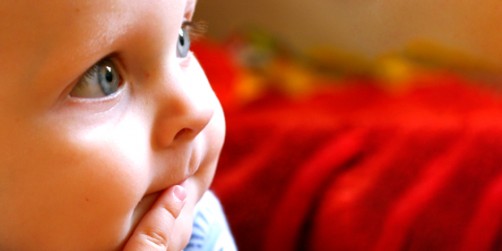 Newswise — Wichita State University grad student Jennifer Francois is conducting research that studies the ways in which infants' eyes track their mothers' faces -- a small detail that can have a big impact on a child's foundation for future language development.

Francois, a doctoral candidate in Wichita State's Department of Communication Sciences and Disorders, used eye-tracking technology to monitor and record eye-gaze behaviors of 3- to 4-month-old infants.

The study is a collaborative effort between the WSU’s Applied Psychology Research Institute – which owns the eye-tracking equipment – Barbara Chaparro, coordinator of the Human Factors program, and Francois’ advisor, Kathy Coufal, both of whom lent their expertise in technology and language development to Francois.

“It has made for an avenue of unique and innovative research,” says Francois.

The babies were shown images of their mother and of unfamiliar people. Their eye-gaze behaviors were monitored and recorded using a device that takes light reflected off their corneas to determine where they are looking on the screen.

Variables Francois is studying include the amount of time spent looking at various facial features, as well as the number of times each of those areas were viewed.

“The use of this technology will allow us to examine those subjective observations that have long held our belief about infant looking,” Francois says. “This will allow for a more objective means by which to examine looking behavior.”

Francois wants to determine what unique facial characteristics, if any, differentiate mothers from unfamiliar people and how that helps to facilitate infant attention, which in turn helps lay the foundation for later language acquisition. Prior research has shown that mothers are unique in how they talk and connect with their babies, which helps babies understand how the communicative process works.

Historically, research has focused on eyes as being an important feature that promotes a mutual gaze and increased attention between mother and child. Much of this early research, however, was collected using subjective methods, Francois says.

So far, Francois’s research has observed some notable areas that distinguish familiar and unfamiliar faces. One region that seemed to be of surprising interest to the infants is the nose of familiar faces.

“As it stands, the results from my study suggest that our assumptions about what we know about where young infants look may be incorrect,” she says.

The next step for Francois is to study the patterns between the babies, as well as determining whether gender plays a role in looking behavior. She also hopes someday to expand her research and investigate the gaze behaviors of babies who may be at risk for developmental delays.

“I absolutely love what I have chosen to do,” Francois says. “It is very exciting to get to see how this technology can be successfully used with very young infants.”