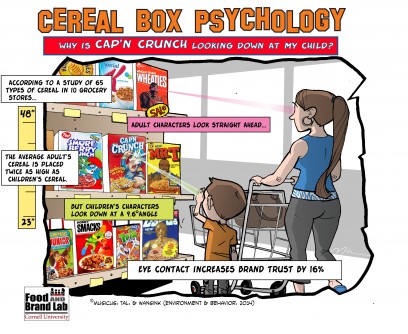 Newswise — Director of Cornell’s Food and Brand Lab Brian Wansink and post-doctoral lab researcher Aner Tal, are releasing a new study today published in the Journal of Environment and Behavior that discovered consumers are 16 percent more likely to trust a brand of cereal when the characters on the boxes on the supermarket shelves look them straight in the eye. Not surprisingly, the study also found that the gaze of characters on children’s cereal boxes is at a downward, 9.6-degree angle, while characters on adult cereal boxes look almost straight ahead.

“If you are a parent who does not want your kids to go ‘cuckoo for Cocoa Puffs,’ avoid taking them down the cereal aisle. If you are a cereal company looking to market healthy cereals to kids, use spokes-characters that make eye contact with children to create brand loyalty.”

“There are some cool things happening in grocery stores, many based on psychology, that impact how and what people purchase.

Media Note: A short video of Brian Wansink explaining the research, as well as an informational graphic and additional details of this research can be found at: http://foodpsychology.cornell.edu/op/cerealeyes

Journal of Environment and Behavior