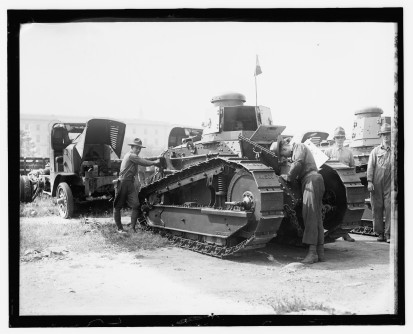 Courtesy of the Library of Congress.

U.S. soldiers work on a World War I era tank in Washington D.C. The tank is similar to many used for the first time during World War I. DePaul University experts are available to discuss war technology and many other subjects surrounding “The Great War,” which the U.S. was involved in from April 1917 to November 1918.

Newswise — CHICAGO — The U.S. officially entered the Great War – known more commonly as World War I – 100 years ago in April 1917 and remained active through the war’s end in November 1918. Many historians view WWI as a turning point for the rest of the 20th century, and DePaul University faculty are available to speak on the war’s relevance in modern times. Experts can discuss WWI technologies that changed how war is waged, how colonial building led to war, and how the war influenced a young Adolf Hitler’s beliefs about power and architecture.

Eugene Beiriger, Associate Professor of History, Peace, Justice and Conflict Studies, College of Liberal Arts and Social Sciences. Beiriger is an expert on 19th and 20th century British and European political and diplomatic history. He has written and presented on the First World War, and can speak on the importance of the war in today’s world. “We cannot understand the issues of today — European politics and union, Russian assertiveness under Putin, Turkish political strife, and the politics and divisions of the Middle East, South and East Asia, as well as the growth of U.S. economic and military power — without confronting the important legacies of the First World War,” said Beiriger.

“At the time, it was ‘the war to make the world safe for democracy,’ ‘the war to end all wars,’ and ‘the Great War.’ All these phrases were used to describe the First World War until Europe experienced the rise of dictatorships of the right and the left in the 1920s and 1930s, and a second world war occurred which was greater in magnitude and destruction. In the U.S. today, the Second World War and the Cold War have long been seen as the most important in the trilogy of 20th century conflicts. Most historians, however, have focused on the First World War as perhaps the most significant event of the 20th century. To them, the First World War remains one of the most bloody, transitional and significant conflicts in human history. The war was the ultimate ‘cataclysm,’ the ‘apocalypse,’ and ‘Armageddon’ itself. It ushered in the ‘age of extremes’ and the ‘century of violence,’” Beiriger said. Beiriger can be reached at 773-325-7454 or [email protected].

Robert Garfield, Associate Professor of History, College of Liberal Arts and Social Sciences. Garfield is an expert on the history of European expansion, the history of science and technology, and African history. He can speak on the military technology that changed WWI and future wars. “WWI was the first war fought in three dimensions, with airplanes above and submarines below. Airplanes ended the idea that a nation was some sort of giant fortress with walls around it that an enemy had to breach. Now you could just fly over them. That contributes to the idea that there was no longer such thing as the battlefront and the warfront. Now everybody was at war and at risk. Military technology changed the sociology of war as well as its actual fighting,” said Garfield.

“WWI was also the first real mechanical war,” he noted. “Even before the war began, there was the automobile and the airplane. The war also saw the beginnings of the tank and self-propelled artillery pieces. In a sense, warfare was taken over by the internal combustion engine, which meant horses and men simply were not as important as they were before, although they still died in enormous numbers. The ability to build and use things, rather than simply have mass armies, is something that WWI changes very much.” Garfield can be reached at 773-325-1556 or [email protected].

Paul Jaskot, Professor of History of Art and Architecture, College of Liberal Arts and Social Sciences. Jaskot is an expert on post-war German art and architecture. He can speak on colonial building leading up to WWI; Hitler’s vision of architecture during his rise to power; how the conflict of WWI and its conclusion in the Treaty of Versailles contributed to the rise of Hitler; and how the Nazi Party used the memory of WWI as a constant point of reference in their regime. “Germany colonized very late, especially compared to France or Britain, and we know that that conflict helped lead to WWI. Architecture was becoming more and more international; Germany was using architectural innovation to build settlements more quickly. Therefore, this type of conflation with international competition and expansion of architectural technology was part and parcel to the war beginning,” said Jaskot.

“Hitler's ‘Mein Kampf’ was written in the shadow of WWI in 1925,” he added. “There's a cultural chapter in the book in which Hitler talks about how great nations, ones that are powerful in economics, social, military, are ones that build. He makes an analogy between strong countries and what he thinks is good architecture, like traditional forms Classicism, Gothic and Egyptian. So, he wasn't really challenging architectural form, but he really talked about architecture as an expression of power, and he never wavered in that position from 1924 until he died in 1945.” Jaskot can be reached at 773-325-2567 or [email protected].