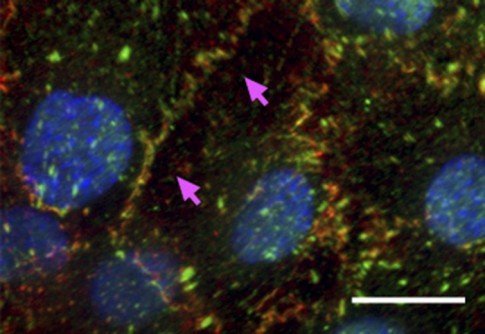 A study in The Journal of Cell Biology shows that FAK helps cancer cells metastasize. Here, FAK (green) gathers with another kinase protein called Src (red) at cell-to-cell junctions in blood vessel walls in the presence of the tumor-promoting growth factor VEGF.

Newswise — Cancer cells have something that every prisoner longs for—a master key that allows them to escape. A study in The Journal of Cell Biology describes how a protein that promotes tumor growth also enables cancer cells to use this key and metastasize.

Unless it can enter a blood or lymphatic vessel, a cancer cell is imprisoned in the tissue where it arises. The growth factor VEGF is the tumor cell’s master key. It loosens connections between endothelial cells that form the lining of blood vessel walls, enabling the cancer cell to squeeze through, plunge into the bloodstream, and then spread to other tissues in a process called metastasis.

VEGF fosters this escape by triggering the phosphorylation of a protein called VEC, which helps fasten endothelial cells together. This alteration causes the complexes that contain VEC to fall apart, opening gaps between endothelial cells. Researchers haven’t uncovered all of the steps leading to VEC phosphorylation, but one protein that might be involved is focal adhesion kinase (FAK), which accumulates at cell-to-cell junctions in the presence of VEGF.

To pinpoint the protein’s function, researchers from the UC San Diego Moores Cancer Center gave a FAK inhibitor to a group of mice with fast-spreading breast cancer and a group with ovarian tumors. Previous work had shown that the inhibitor thwarts tumor growth, and in both groups of mice the researchers found that it prevented phosphorylation of a specific amino acid—tyrosine 658—in VEC from tumor-associated blood vessels. The researchers then injected VEGF into control mice and into mice with an inactive variant of FAK in their endothelial cells. VEGF spurred phosphorylation of VEC’s tyrosine 658 in the control rodents but not in the animals expressing inactive FAK, providing further evidence that FAK controls this event.

The researchers also measured FAK’s effect on metastasis in mice that had been injected with invasive tumor cells. Compared with control animals, mice that expressed inactive FAK in their endothelial cells showed fewer tumor cells in their lungs. Blocking endothelial FAK curbed metastasis without altering tumor growth, the team found.

The findings reveal a new role for endothelial FAK in the control of metastasis. The results place the protein in the pathway that controls vascular permeability and suggest that FAK helps VEGF-expressing cancer cells open endothelial cell layers. FAK inhibitors are being tested in clinical trials because they restrain tumor growth, and this study suggests they may provide an additional benefit by curtailing metastasis.