“Fake News” Went Viral After the Death of King James I 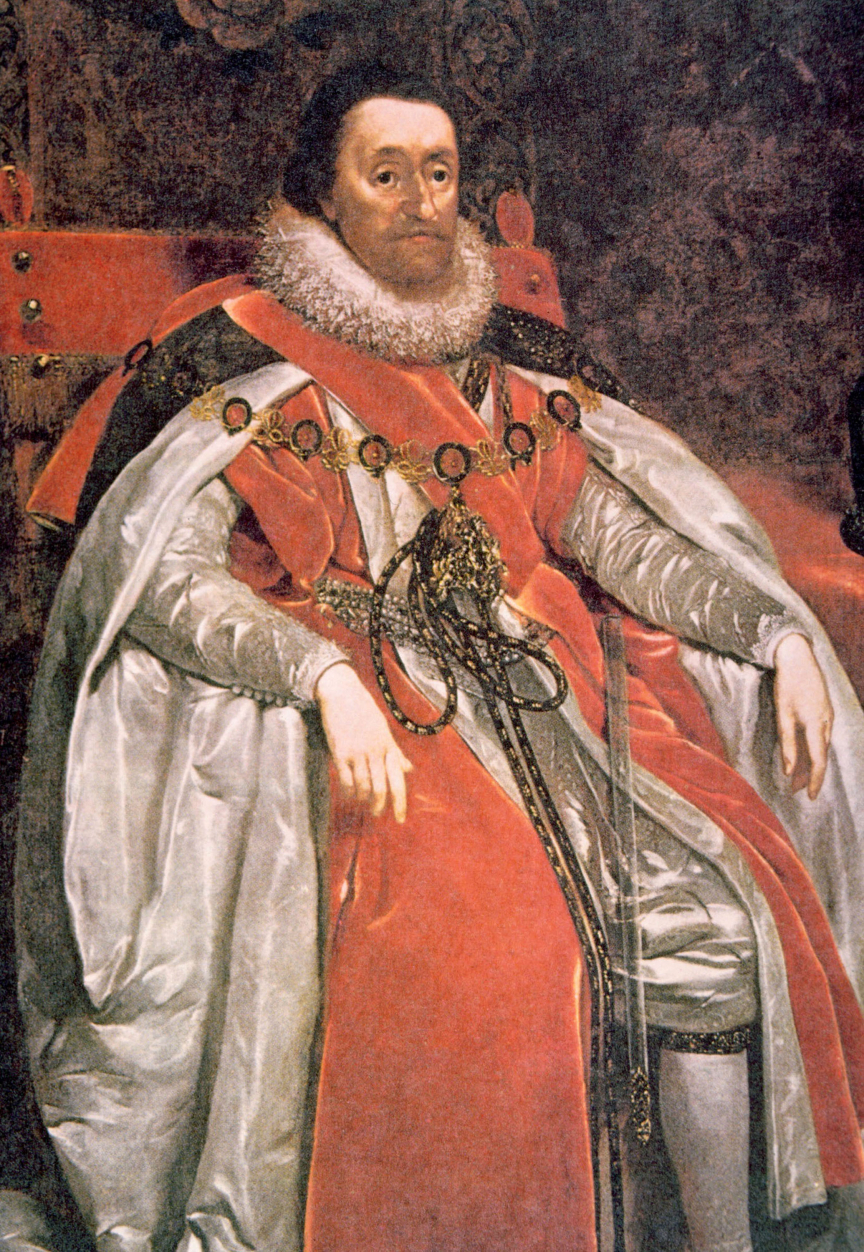 “King James I of England and VI of Scotland” by Daniel Mijtens, 1621.

And even then, they contended with the problem of “fake news” – conspiracy theories spread through these media to undermine the political discourse.

Alastair Bellany, chair of Rutgers University-New Brunswick’s history department, discusses how the death of one early-modern English king spurred a viral conspiracy theory that, through pamphlets and word of mouth, contributed to the execution of the next king – and whether parallels can be drawn to our own age of QAnon-fueled and politically driven lies about everything from vaccines to election integrity. (Full story with images here).

How did the death of King James I spur a politically motivated conspiracy theory?

King James I of England died in 1625 of a violent intermitting fever. Disliking his physicians’ attempts to treat him through orthodox methods of purging and bleeding, James also took medicines prepared by his close advisor and intimate friend, George Villiers, the Duke of Buckingham.  The royal physicians were horrified, and angrily complained about Buckingham’s meddling; and when the king died, whispers of foul play began to circulate at court.  The following year, George Eglisham, a Catholic Scottish physician, published The Forerunner of Revenge, a widely distributed pamphlet that openly accused Buckingham of poisoning the king in order to prevent James from brokering a diplomatic rapprochement between Protestant England and Catholic Spain.

Tracking down clues scattered in diplomatic and publishing archives, my co-author Thomas Cogswell and I were able to show that Eglisham’s pamphlet was almost certainly published as part of a disinformation campaign by the Spanish authorities in the Southern Netherlands. They who hoped to destabilize English opinion and undercut Buckingham’s authority as he mobilized England and its allies in a war against Spain. The English and Latin versions of Eglisham’s pamphlet masked their makers’ motivations: They veiled Eglisham’s Catholic identity and used a false imprint to hide the fact that they were printed in Spanish-ruled Brussels.

What happened when that pamphlet went viral?

The Forerunner of Revenge found a receptive audience among English nobles and members of Parliament who hoped to target Buckingham for alleged corruption. Copies began to circulate in London as Parliament met in 1626. When the House of Commons prepared a bill of impeachment against Buckingham, they included a final article which came close to accusing him of murder. The new king, Charles I, dissolved the session of Parliament before the House of Lords could render a verdict.  But Charles could not staunch the spread of the poisoning accusation or the rising hostility to Buckingham. The stymied impeachment process and the scandalous success of Eglisham’s pamphlet put the poisoning charge into wider circulation, and helped fuel the increasingly toxic and violent political atmosphere that culminated in Buckingham’s 1628 assassination.

After Buckingham’s death, Eglisham’s pamphlet continued to circulate in England, mostly in handwritten copies.  The pamphlet had almost immediately taken on a life of its own, completely disconnected from its creators’ intent. Its allegations were now used by anti-Catholic and anti-Spanish Englishmen who feared a Catholic plot to undermine England’s church and constitution.   By the time Charles I’s government collapsed in the early 1640s, the old poisoning allegation was ready to be repurposed for anti-Catholic and anti-Royalist Parliamentarian propaganda.  One 1642 version even turned Eglisham into a Protestant and falsely claimed that Buckingham had arranged for his murder. In 1648, during the crisis of the English Revolution, radical members of Parliament used the poisoning allegation directly against King Charles, suggesting that by protecting Buckingham from justice he had covered up his own role in his father’s murder. This version of the allegation fed in turn into the broader political and military crises that would result in Charles’ 1649 trial and execution.

How did the 17th century English read the news and share memes?

The early 17th century was a news-obsessed age. “What news?” became a common greeting; urban meeting spots became hives of information exchange; publishers issued “news-books” and pamphlets to cater to popular demand; and serial publications called “corantos” became the forerunners of the newspaper. Printed material was strictly censored by the state, but writers and publishers found ways around this. Some, like Eglisham, printed their pamphlets overseas and smuggled them into England where booksellers sold them “under the counter,” or friends shared them through social networks.

The riskiest political commentary, however, circulated through “underground” handwritten copies and oral exchangeBuckingham was the target not only of underground pamphlets, but also of vicious poems called “libels.” These ranged from two-line jingles that could be traded in conversation to complex verse satires, such as witty epigrams or scabrous songs set to popular tunes. The poisoning allegations against Buckingham spread widely through these verse libels in the later 1620s.  People who might never have read Eglisham’s pamphlet could thus easily encounter his charges through these other media.

What happened when the English censorship system collapsed?

In the early 1640s, when the English censorship regime collapsed along with the rest of Charles I’s government, and the country slid into civil war, print publishing briefly became free. Thousands of pamphlets poured from London’s presses, creating a Babel of political debate and speculation that many found disorienting, some found thrilling and others found essential to the practice of new kinds of politics.  This explosion in print publication generated an outpouring of radical and creative political ideas, many of which we still value today; but at the same time the media explosion hardened political division, sowed confusion, and both invoked and incited political violence.

From the start of the seventeenth-century expansion of political newsmongering, many recognized that the credibility of the information unleashed by this media revolution could not be taken for granted.  Savvy politicians quickly saw how popular demand for news could be exploited, and opinion manipulated.  Buckingham himself was interested in the possibility of using the media to craft an appealing political image. The charge of “fake news” (not their term, but the sentiment was the same) became another weapon to hurl against political rivals. By the time of the mid-century revolution, every major event and personality might be contested and debated. The proliferation of media helped generate partisan name-calling and partisan identity; news-books were associated with specific political groups; publishers began specializing in certain strands of politics; and readers could become locked in media bubbles of what today we might call confirmation bias. In other words, we have several features of a political atmosphere similar to the one we complain about today.

What lessons can we draw in the 21st century from the media environment of the 17th?

I’m wary of drawing straightforward parallels and think it’s critical always that we recognize the otherness of the past.  But our current crisis of misinformation has a much longer history as well as distinctive contemporary features. We can see that the problem and fear of deceptive reporting is older even than newspapers, as are anxieties about the relationship between political partisanship and media distortion.  We can see too that there is a much longer history to be explored of the power of conspiracy theories to tap into anxieties and to offer simplifying explanations for a confusing, worrying reality.

As in the 17th century, we’re witnessing now a period of ideological and political flux that happens to coincide with a media revolution. The media shift then involved the expansion of cheap print publication, the circulation of oral and scribal news and libel, rising literacy rates and the creation of new media genres. Today, we have the rise of the internet, social media, partisan media ecosystems and echo-chambers, as well as the decline of the old regime of print and local journalism.

The more we know about the intertwined history of media and politics, the better we can understand and navigate our own times.  History doesn’t always offer comforting lessons.  But perhaps we can learn something from the 17th-century news junkies who collected and read everything they could find but also understood the importance, in the face of what to them felt like a bewildering proliferation of information, of learning to read critically and being ready to revise what they thought they knew when better information came along.