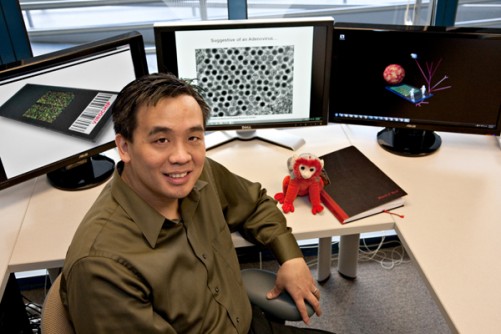 “At first we thought this was a genuine hepatitis virus, but later we found it in data sets from patients with many other diseases and even from animals,” said Charles Chiu, PhD, a professor of laboratory medicine at UCSF.

Newswise — The report by scientists of a new hepatitis virus earlier this year was a false alarm, according to UC San Francisco researchers who correctly identified the virus as a contaminant present in a type of glassware used in many research labs. Their finding, they said, highlights both the promise and peril of today’s powerful “next-generation” lab techniques that are used to track down new agents of disease.

In research published online September 11, 2013, in the Journal of Virology, researchers led by Charles Chiu, MD, PhD, director of the UCSF Viral Diagnostics and Discovery Center, traced the source of the contamination back to tiny diatoms, a type of oceanic algae having nothing to do with human disease.

A scientific team led by researchers from the National Institutes of Health (NIH) first identified the virus as a potential cause of hepatitis in their study of blood samples from 92 people from China who had serious cases of hepatitis not caused by any of the five known hepatitis viruses. Chiu and colleagues discovered the same virus, which they called parvovirus-like hybrid virus (PHV), independently, in a different set of hepatitis patients whose disease was not caused by known viruses.

To further investigate the origin of the virus, Chiu’s UCSF team tracked down its true source by applying next-generation DNA sequencing techniques in a set of carefully controlled experiments, and by referencing the ever-expanding scientific databases that spell out and catalog viral genomes.

“At first we thought this was a genuine hepatitis virus, but later we found it in data sets from patients with many other diseases and even from animals,” said Chiu, a professor of laboratory medicine at UCSF.

The researchers also found that the virus sequenced from samples around the world strangely exhibited almost no genomic diversity.  The research team strongly suspected that PHV was a laboratory contaminant and began probing other databases in search of the true source of the virus.

“We did some data mining of environmental databases and found matching DNA sequences from viruses originating in coastal waters off California and Oregon, but not elsewhere” Chiu said.

A developer of sampling and testing technologies may have sourced silica from diatoms in the ocean to make a popular glass column used in the studies, Chiu said. The columns are used to centrifugally spin biological samples to extract nucleic acids — DNA and RNA.  Viral DNA that may have once infected the diatoms was also likely extracted as a contaminant during the procedure, along with DNA from biological samples, he said.

“The silica used in nearly all commercial spin columns is derived from the cell walls of diatoms,” he said. “We believe that PHV may be a diatom virus that had inadvertently contaminated the silica-based spin columns during manufacture.”

The scientists do not know what caused the cases of hepatitis examined in the studies.

Earlier techniques developed to read out the sequence of DNA building blocks extracted from biological samples permitted the stepwise decoding of genes and eventually the characterization of entire genomes of humans and other organisms.

But in recent years game-changing technological advances referred to as next-generation sequencing  have permitted exponentially faster and cheaper sequencing of millions of DNA molecules in a single run through a lab protocol.

These state-of-the-art techniques for piecing together the genomes of organisms from tiny amounts of DNA can be used to efficiently detect pathogens previously unknown to science, but they also are so sensitive that they easily pick up contaminants, Chiu said.

It is not clear why the NIH-led team did not also detect the contaminating DNA in the control samples, Chiu said. Different techniques may have been used in the analysis of control samples in comparison to samples from hepatitis patients, or there may have been lot-to-lot variations in glassware, Chiu speculates.

A similar viral false-alarm scenario unfolded in recent years with a mouse virus called XMRV, first reported in 2006. The virus initially was thought to be associated with human prostate cancer and chronic fatigue syndrome, but last year Chiu and others, including original XMRV co-discoverer Joseph DeRisi, PhD, Howard Hughes Medical Institute Investigator and professor of biochemistry at UCSF, confirmed that XMRV was actually a viral contaminant of laboratory cell cultures and was not present in prostate cancer tissue.

These studies highlight the importance of repeating experiments with good controls to ensure that results are accurate, Chiu said. “Reproducibility is a cornerstone of science, yet far too few studies are validated by follow-up investigation,” he said.  Next-generation sequencing is a promising approach to rapidly confirm and validate discoveries of new disease agents, saving investments in time and money that might otherwise be spent pursuing false leads, he added.