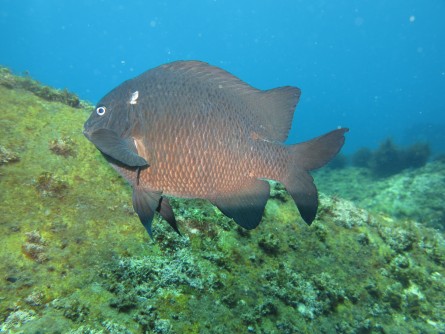 A damselfish near a volcanic seep in New Zealand

Newswise — Fish that ‘farm’ their own patches of seaweed alter their ‘cropping’ practices under high CO2 conditions, researchers at the University of Adelaide in Australia have found.

Published in the Nature publication, Nature Ecology and Evolution, the researchers studied damselfish at undersea volcanic seeps in New Zealand.

The seawater at the seeps has high CO2 conditions that naturally mimic the ocean CO2 levels expected by the end of the century. That rise is due to ongoing human greenhouse gas emissions.

Damselfish are known for their farming. They don’t just graze, they select a patch of algal turf to protect, weed out unwanted plants, defend the patch against intruders and fertilise their territory through defecation.

“Climate change and ocean acidification are forecast to decrease species diversity in our oceans but we discovered that some herbivorous fish species might actually increase in number by weeding their territories in such way that their food (turf algae) experiences faster growth rates,” says project leader Professor Ivan Nagelkerken, from the University’s Environment Institute.

“Growth rates of their algal food are further accelerated by the elevated CO2, an important nutrient for plants, and as a result, these fish can occupy smaller territories. This means that more fish can live on the same surface area compared to present-day conditions.”

Carried out by PhD student Camilo Ferreira, the study produced results that could probably not have been predicted from laboratory experiments.

Damselfish behaviours were compared between the high CO2 volcanic seep waters to populations living nearby with normal, current day, CO2  levels. Under high CO2, damselfish changed their behaviour to ensure a high turnover of crops. They spent twice as much time on weeding their crops than under control conditions.

“If these results are also applicable to other species, such as some fisheries species, that would be good news for fisheries stocks,” says Professor Nagelkerken.

“Nevertheless, there are still strong predictions of declines in other species, likely leading to an overall decrease in species richness.”