Study shows how some coral can survive annual bleaching events 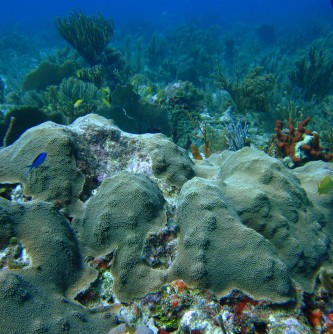 Orbicella faveolata, also known as boulder coral or mountainous star coral, in a Caribbean coral reef. Researchers have discovered that this species of coral is able to withstand repeated heat stress, known as "bleaching," in part because of fat it stores in its body. 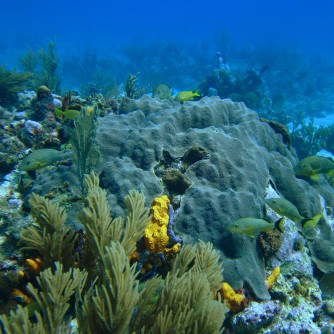 Orbicella faveolata, also known as boulder coral or mountainous star coral, in a Caribbean coral reef. Researchers have discovered that this species of coral is able to withstand repeated heat stress, known as "bleaching," in part because of fat it stores in its body.

The study offers important clues as to which coral species are most likely to withstand repeated bouts of heat stress, called “bleaching,” as climate change warms world oceans.

In the Nov. 18 issue of the Proceedings of the Royal Society B: Biological Sciences, the researchers report that the same fat-storing coral species that showed the most resilience in a 2014 bleaching study has recovered more fully in the year since, compared to other species that stored less fat.

Lead study author Verena Schoepf, a former doctoral student in the School of Earth Sciences at The Ohio State University and now a research associate at the University of Western Australia, said that tropical corals are extremely sensitive to heat stress.

“Three global bleaching events have already occurred since the 1980s, and will likely occur annually starting later this century,” she said. “Therefore, it has become more urgent than ever to know how coral can survive annual bleaching—one of the major threats to coral reefs today.”

Corals are animals that live in symbiosis with algae, and when stressed, they flush the algae from their cells and take on a pale, or “bleached,” appearance. Bleached coral are more susceptible to storm damage and disease.

Andréa Grottoli, professor in the School of Earth Sciences at Ohio State and principal investigator of the study, said that repeated bleaching will ultimately lead to less diversity in coral reefs, where all the different sizes and shapes of coral provide specialized habitats for fish and other creatures.

“Bleaching will significantly change the future of coral reefs, with heat-sensitive coral unable to recover,” Grottoli said. Interactions among coral hosts and their endosymbiontic algae, as well as predators and prey would then change in a domino effect.

“Already, bleaching events have resulted in significant amounts of coral dying and causing impact to ocean ecosystems, but up until now it was largely unknown whether coral could recover between annual bleaching events,” Schoepf added.

In fact, evidence that fat is a key component to coral survival has been building in recent years.

In 2014, Grottoli, Schoepf and their colleagues exposed three different coral species to two rounds of annual bleaching, then tested them six weeks later to see how well they had recovered. At that time, finger coral (Porites divaricata), the species which kept the largest fat reserves, had fared the best. Boulder coral (Orbicella faveolata), which kept less fat reserves, had recovered to a lesser extent. Mustard hill coral (Porites astreoides), which stored the least fat, had recovered the least.

Now, one year later, the researchers have revisited the corals and discovered that both the finger coral and boulder coral have recovered, while the mustard hill coral has not yet recovered, and likely never will if bleaching frequency remains high.

Surprisingly, all three species appear to be healthy at first glance. The symbiotic algae had returned to their cells, so the corals’ normal color had returned. But further analyses of the corals’ bodies tell a different story.

Healthy corals get their day-to-day energy from sugar that the algae make through photosynthesis. For growth, healing and reproduction, they eat a diet that includes zooplankton. During bleaching, their nutritional state is thrown out of balance.

“When coral is bleached, it no longer gets enough food energy and so it starts slowing down in growth and loses its fat and other energy reserves – just like humans do during times of hardship,” Schoepf said.

When corals photosynthesis slows down during bleaching, they start consuming their own bodies, as human bodies do when severely malnourished. And while all the corals in the study were able to eat zooplankton, the ones who had more fat to burn had less healing to do after the repeat bleaching subsided, and were able to resume a normal status within a year.

The ones with less fat to burn sustained more damage, and so—even a year later—they are still in the process of healing.

“Our research will help with predicting the persistence of coral reefs, because knowledge of their capacity to recover from annual bleaching is critical information for these models,” Grottoli said.

This research was funded by the National Science Foundation.

Proceedings of the Royal Society B: Biological Sciences