Studying caterpillars can improve understanding of metabolic diseases in humans 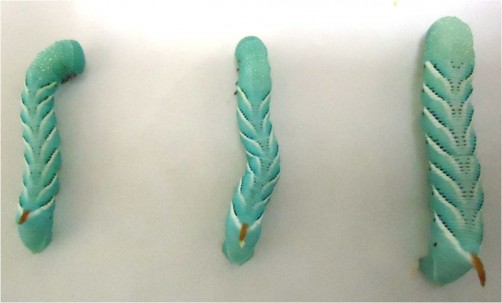 Fat metabolism pathways are similar among vertebrates, including humans and invertebrates such as the tobacco hornworm caterpillar. According to the study’s authors, understanding the role of fats in insects could help understand human metabolic diseases.

The researchers found that fat-fed caterpillars had a smaller body size because they ate less overall. The researchers measured lower food consumption and fewer fecal pellets produced. “The results suggest that increased dietary fat results in cessation of feeding in these insects,” according to the researchers.

Full AbstractNutritionally balanced diets are important for fitness, but for insects the high energy value of fat storage is crucial for reproduction and development. Although studies have shown that insects fed high-carbohydrate diets have increased fat storage, and excess fat storage in insects may have a fitness cost, little is known about how insects regulate fat consumption when presented with diets containing varying lipid content. To determine how insects respond to high-fat diets, we fed caterpillars of different ages high (5.6%), medium (3.4%) or low (0.4%) fat diets. Young Manduca sexta larvae reared on high-fat diet had 80% mortality and 43% lower body mass compared to those reared on medium- or low-fat diets. Older larvae showed no difference in mortality, but those fed a high-fat diet had a lower average body mass by the third day of the fifth instar. Growth rates and development time also differed. High-fat–fed caterpillars wandered later than those fed low- and medium-fat diets. To test the hypothesis that the increased survival of older larvae was due to increased lipid transport, we measured mRNA expression of Apolipoprotein I and II (APO1 and 2), proteins responsible for transporting lipids to the fat body and to various tissues. APO1 and 2 expression did not differ with dietary fat content. In addition, we tested the hypothesis that caterpillars preferentially metabolize fat during the fifth instar. We measured oxygen consumption and carbon dioxide emission of caterpillars fed a high- or low-fat diet and calculated the respiratory quotient. To determine the mechanism underlying the decrease in body size, we tested the hypothesis that the high-fat diet altered feeding. Caterpillars fed a high-fat diet indeed ate less, as indicated by a decrease in food consumption and the number and mass of fecal pellets produced. These results suggest that increased dietary fat results in cessation of feeding in these insects. Due to conserved fat metabolism pathways in vertebrates and invertebrates, better understanding of the role of lipids in insects could contribute to knowledge of human metabolic diseases and provide support for using insect models for these studies.

NOTE TO JOURNALISTS: To schedule an interview with a member of the research team, please contact Stacy Brooks at [email protected] or (301) 634-7209.