9-May-2017 9:00 AM EDT, by Florida Atlantic University
favorite_border 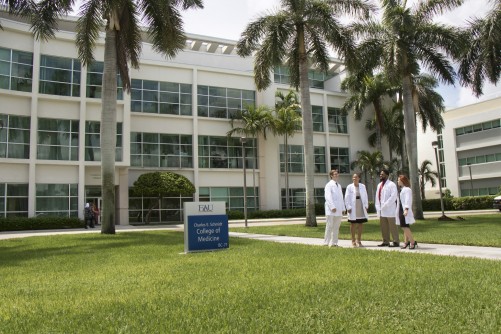 The four-year psychiatry residency program is based at Tenet HealthCare system’s Delray Medical Center, the primary site for the program, South County Mental Health Center in Delray Beach and Boca Raton Regional Hospital. The program has been approved for 16 positions and will participate in the National Resident Matching Program to welcome its inaugural class on July 1, 2018.

“The United States faces a critical shortage of psychiatrists as the demand for mental health services at all levels continues to rise exponentially,” said Phillip Boiselle, M.D., dean of FAU’s Charles E. Schmidt College of Medicine. “Working in concert with our outstanding hospital partners in our Graduate Medical Education Consortium we are committed to providing a strong health care delivery system in this region. The addition of our newest residency program in psychiatry is a testament to our continued commitment.”

FAU’s psychiatry curriculum will include clinical neuroscience, psychotherapy, psychopathology and somatic therapies. The psychiatry residency is led by program director John W. Newcomer, M.D., a leading neuroscientist and psychiatrist, and a professor of integrated medical science in FAU’s College of Medicine.

“We are proud to partner with Florida Atlantic University, our colleagues in the GME Consortium and leadership in the Charles E. Schmidt College of Medicine to bring this important program to Palm Beach County,” said Mark Bryan, CEO of Delray Medical Center. “Our state-of-the-art psychiatric center provides high-quality inpatient programs and will give FAU’s psychiatry residents access to leading physicians and professionals in the field as well as an optimal environment to care for those with various psychiatric disorders and conditions.”

In 2015, the National Institute of Mental Health estimated that 9.8 million Americans over the age of 18 suffered from a serious mental illness and an estimated 43.4 million adults aged 18 or older had a mental illness (AMI or any mental illness), representing 17.9 percent of all U.S. adults.

A survey by the Association of American Medical Colleges (AAMC) found that 59 percent of psychiatrists are 55 or older, the fourth oldest of 41 medical specialties. In 2014, 45 states had fewer psychiatrists relative to their populations than they had in 2009. According to the American Medical Association (AMA), the total number of physicians in the U.S. increased by 45 percent from 1995 to 2013, while the number of adult and child psychiatrists only rose by 12 percent, from 43,640 to 49,079.

FAU’s Charles E. Schmidt College of Medicine is one of 147 accredited medical schools in the U.S. The college was launched in 2010, when the Florida Board of Governors made a landmark decision authorizing FAU to award the M.D. degree. After receiving approval from the Florida legislature and the governor, it became the 134th allopathic medical school in North America. With more than 70 full and part-time faculty and more than 1,300 affiliate faculty, the college matriculates 64 medical students each year and has been nationally recognized for its innovative curriculum. To further FAU’s commitment to increase much needed medical residency positions in Palm Beach County and to ensure that the region will continue to have an adequate and well-trained physician workforce, the FAU Charles E. Schmidt College of Medicine Consortium for Graduate Medical Education (GME) was formed in fall 2011 with five leading hospitals in Palm Beach County. In June 2014, FAU’s College of Medicine welcomed its inaugural class of 36 residents in its first University-sponsored residency in internal medicine.