Dryas monkeys, known locally as Inoko, have perplexed scientists for decades because of their elusive nature.

Daniel Alempijevic sets camera traps to capture rare video footage of Dryas monkeys as well as an array of other charismatic animals such as the bonobo, African palm civet, and potto who also inhabit the Lomami National Park. 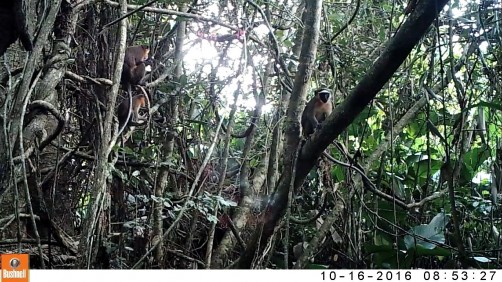 Dryas monkeys captured by video for the first time in the Lomami National Park in the Democratic Republic of Congo. 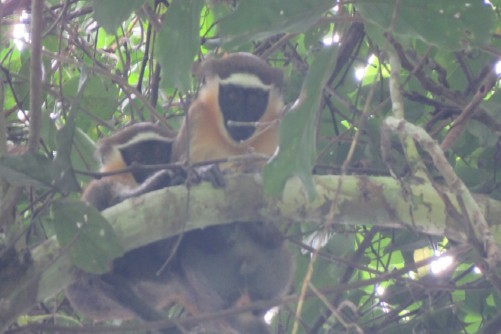 Close-up of Dryas monkeys in the Lomami National Park in the Democratic Republic of Congo.

Newswise — If a tree falls in a forest and no one is around to hear it, does it still make a sound? Not only does the tree make a sound, so do the creatures inhabiting the forest – or in this case – the rainforest deep in the heart of Africa. Using remote sensing cameras and sound recorders, researchers from Florida Atlantic University are the first to capture rare video footage of a newly discovered population of critically endangered monkeys in one of the most remote regions in the world. Spanning nearly 2.2 million acres, about 50 times larger than Washington, D.C., and almost the size of Yellowstone National Park, the Lomami National Park in the Democratic Republic of Congo (DRC) in Central Africa is now home to a new population of the Dryas monkey. Originally believed to inhabit only one site on the planet in the Congo basin, this colorful and beguiling animal is about the size of a house cat.

Field teams from the Lukuru Foundation TL2 Project discovered it near the border of the Lomami National Park when they noticed a dead monkey with a local hunter. They later confirmed it to be a Dryas monkey, known locally as Inoko. First discovered in 1932 and believed to be nearing extinction due to its small population size and unregulated hunting, this species has perplexed scientists for decades because of its elusive nature.

“The Dryas monkey is extremely cryptic and we had to think of a creative strategy to observe them in the wild,” said Kate Detwiler, Ph.D., a primatologist and an assistant professor of anthropology in FAU’s Dorothy F. Schmidt College of Arts and Letters, who has been collaborating with scientists at the Lukuru Foundation for more than eight years. She also helped to discover a new species, the Lesula monkey, in that same park in 2012. “Dryas monkeys are drawn to dense thickets and flooded areas. When threatened, they quickly disappear into a tangle of vines and foliage, mastering the art of hiding.”

Detwiler jumped at the opportunity to bring the dryas project to her lab when her collaborator John Hart, Ph.D., scientific director of the Lukuru Foundation, revealed the discovery. For years, the Lukuru Foundation’s TL2 Project team members have been surveying the rainforests for the presence of DRC’s endemic and endangered species, and discovering diverse fauna including the Dryas monkey. Their efforts were the impetus for the DRC to officially establish the Lomami National Park within the Tshuapa-Lomami-Lualaba (TL2) conservation landscape last July, and is the country’s first national park in more than two decades. FAU is the first university in the United States to conduct primate field research in the Lomami National Park and greater TL2 Landscape.

Trying to capture the monkeys by video in the middle of the rainforest was no easy feat and required unusual tactics. Detwiler reached out to then 24-year-old Daniel Alempijevic, now a master’s degree candidate in FAU’s Environmental Sciences Program, to help accomplish the task. To get the job done, Alempijevic had to learn how to climb trees – really tall trees – and received a tree-climbing certificate from the Institute of Tropical Ecology and Conservation in Bocas del Toro, Panama. He is the first person to conduct an arboreal camera trap survey in the TL2 Landscape, and spent a semester there climbing very remote rainforest trees to set up the cameras. The cameras are placed in strategic locations on the ground, mid-range and in the canopy to determine what level of the forest the Dryas monkeys prefer.

“This was an opportunity of a lifetime,” said Alempijevic. “It was an incredible experience to work in the canopy of such a remote site, and to get the first camera-trap videos of an extremely rare and elusive species.”

Video footage from these camera traps are providing vital information about this critically endangered species as well as an array of other charismatic animals such as the bonobo, African palm civet, and potto who also inhabit the Lomami National Park.

“The Congo Basin rainforest is the second-largest rainforest in the world, and contains some of the least known species on the planet, many of which are threatened from hunting pressure and deforestation,” said Detwiler. “Our goal is to document where new Dryas populations live and develop effective methods to monitor population size over time to ensure their protection. Understanding where they reside is important, because the animals living inside the Lomami National Park are protected, as it is illegal to hunt.”

In addition to much needed conservation efforts, Detwiler and her team also are working to solve the evolutionary puzzle of the Dryas monkey using genomic research to test the hypothesis that this species is a close relative of the Vervet monkey. Since 2014, the Detwiler laboratory has been studying a free-living population of Vervet monkeys that have remarkably survived for decades in a narrow strip of dense mangrove swamp next to the airport in Fort Lauderdale. Alempijevic used this population to practice his camera trap methods and hone in his observation skills before leaving for the Dryas field study in the Congo forests.

More information on the Lukuru Foundation’s TL2 Project (www.lukuru.org) and the work conducted by Detwiler and Alempijevic is available on the foundation’s blog at www.bonoboincongo.com.

Caption: Dryas monkeys, known locally as Inoko, have perplexed scientists for decades because of their elusive nature.

Caption: Daniel Alempijevic sets camera traps to capture rare video footage of Dryas monkeys as well as an array of other charismatic animals such as the bonobo, African palm civet, and potto who also inhabit the Lomami National Park.