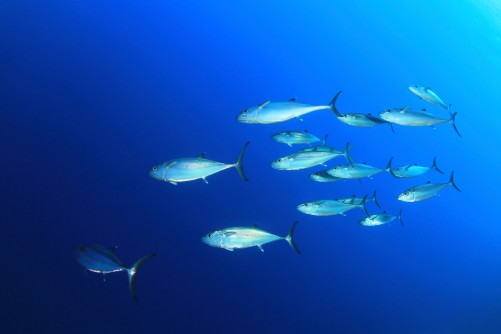 FAU Harbor Branch researchers and colleagues collected more than 1,500 video-polarimetry measurements from live fish from distinct habitats under a variety of viewing conditions, and have revealed for the first time that fish have an “omnidirectional” solution they use to camouflage themselves, demonstrating a new form of camouflage in nature — light polarization matching.

Newswise — The vast open ocean presents an especially challenging environment for its inhabitants since there is nowhere for them to hide. Yet, nature has found a remarkable way for fish to hide from their predators using camouflage techniques. In a study published in the current issue of Science, researchers from Harbor Branch Oceanographic Institute at Florida Atlantic University and collaborators show that fish scales have evolved to not only reflect light, but to also scramble polarization. They identified the tissue structure that fish evolved to do this, which could be an analog to develop new materials to help hide objects in the water.

HBOI researchers and colleagues collected more than 1,500 video-polarimetry measurements from live fish from distinct habitats under a variety of viewing conditions, and have revealed for the first time that fish have an “omnidirectional” solution they use to camouflage themselves, demonstrating a new form of camouflage in nature — light polarization matching.

“We've known that open water fish have silvery scales for skin that reflect light from above so the reflected intensity is comparable to the background intensity when looking up, obliquely at the fish, as a predator would,” said Michael Twardowski, Ph.D., research professor at FAU’s HBOI and co-author of the study who collaborated with co-author James M. Sullivan, Ph.D., also a research professor at FAU’s HBOI. “This is one form of camouflage in the ocean.”

Typical light coloring on the ventral side (belly) and dark coloring on the dorsal (top) side of the fish also can help match intensity by differential absorption of light, in addition to reflection matching.

Light-scattering processes in the open ocean create spatially heterogeneous backgrounds. Polarization (the directional vibration of light waves) generates changes in the light environment that vary with the Sun’s position in the sky. Polarization is a fundamental property of light, like color, but human eyes do not have the ability to sense it. Light travels in waves, and for natural sunlight, the direction of these waves is random around a central viewing axis. But when light reflects off a surface, waves parallel to that surface are dominant in the reflected beam.

Many visual systems for fish have the ability to discriminate polarization, like built-in polarized sunglasses.

Twardowski believes that even though light reflecting off silvery scales does a good job matching intensity of the background, if the scales acted as simple mirrors they would impart a polarization signature to the reflected light very different from the more random polarization of the background light field.

“This signature would be easily apparent to a predator with ability to discriminate polarization, resulting in poor camouflage,” he said. “Fish have evolved a solution to this potential vulnerability.”

To empirically determine whether open-ocean fish have evolved a cryptic reflectance strategy for their heterogeneous polarized environments, the researchers measured the contrasts of live open-ocean and coastal fish against the pelagic background in the Florida Keys and Curaçao. They used a single 360 degree camera around the horizontal plane of the targets and used both light microscopy and full-body video-polarimetry. -FAU-