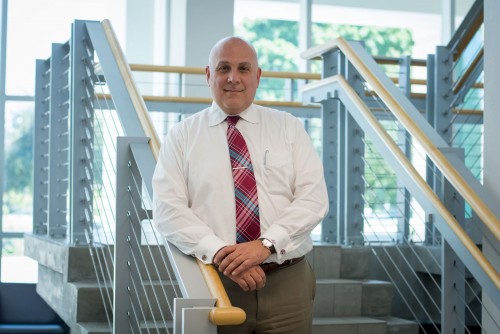 Following the recent announcement by Ted Turner that he has been diagnosed with Lewy Body Dementia (LBD), an international expert at Florida Atlantic University is available to discuss this neurological disorder that affects 1.4 million Americans and their families. Despite being the second most common form of progressive dementia, LBD is not yet a household name.

James E. Galvin, M.D., M.P.H., a world-renowned neuroscientist, an expert on LBD and Alzheimer’s disease and associate dean for clinical research in FAU’s Schmidt College of Medicine, developed the “Lewy Body Composite Risk Score” (LBCRS) to quickly and effectively diagnose LBD and Parkinson’s disease dementia (PDD) in about three minutes. The LBCRS is a brief rating scale that can be completed by a clinician to assess clinical signs and symptoms highly associated with the pathology of this disease.

Galvin is one of the leading international experts on LBD, the second-most common dementia after Alzheimer’s disease, where patients simultaneously experience losses in cognitive function, mobility and behavior.

The centers were selected for their clinical expertise in LBD, experience running clinical trials, capacity of facilities and geographic location (combined, the 33 principal investigators have run 380 clinical trials in the past five years).

FAU’s LBDA Research Center of Excellence is spearheaded by Galvin and housed in the Comprehensive Center for Brain Health at FAU.

“We were very saddened to hear the news about Ted Turner’s recent diagnosis, which sheds a light on the additional 1.4 million Americans suffering from this disease,” said Galvin. “Our Comprehensive Center for Brain Health provides cutting-edge personalized care for a number of neurodegenerative diseases and we will continue to provide the highest level of care for those affected by Lewy Body Dementia.”

As a Lewy Body Dementia Research Center of Excellence, Galvin and his team are furthering efforts locally to serve as a regional resource working in partnership with a national network of centers.

Galvin also spearheaded the South Florida site for the HEADWAY-DLB, a phase 2b multi-center, double-blind, placebo-controlled study to evaluate an investigational medicine, RVT-101, for dementia with Lewy bodies. Although the results of this study were negative, it demonstrated the capacity of LBD patients to participate in clinical trials. Currently, there are no medications available to specifically treat LBD, and patients are typically treated with medications for Alzheimer’s.

The Comprehensive Center for Brain Health is located on the main FAU campus in Boca Raton, 777 Glades Road, ME-104, first floor. Office visits are by appointment only. To schedule an appointment, call 561-297-0164, email [email protected] or visit http://med.fau.edu/ccbh/.

FAU’s Charles E. Schmidt College of Medicine is one of approximately 151 accredited medical schools in the U.S. The college was launched in 2010, when the Florida Board of Governors made a landmark decision authorizing FAU to award the M.D. degree. After receiving approval from the Florida legislature and the governor, it became the 134th allopathic medical school in North America. With more than 70 full and part-time faculty and more than 1,300 affiliate faculty, the college matriculates 64 medical students each year and has been nationally recognized for its innovative curriculum. To further FAU’s commitment to increase much needed medical residency positions in Palm Beach County and to ensure that the region will continue to have an adequate and well-trained physician workforce, the FAU Charles E. Schmidt College of Medicine Consortium for Graduate Medical Education (GME) was formed in fall 2011 with five leading hospitals in Palm Beach County. In June 2014, FAU’s College of Medicine welcomed its inaugural class of 36 residents in its first University-sponsored residency in internal medicine and graduated its first class of internal medicine residents in 2017.