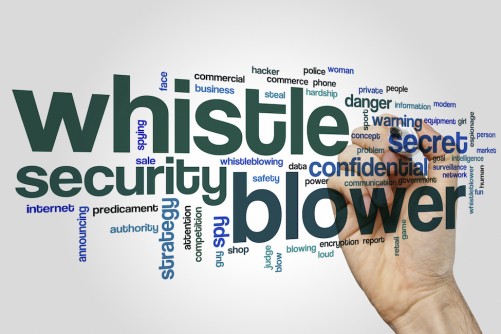 This is the first study to demonstrate that promoting explicit whistleblower protections can have the unintended consequence of actually inhibiting reporting of misconduct by intensifying the perceived risk of retaliation.

Newswise — A new study by researchers at Florida Atlantic University and Providence College has found that vivid language intended to assure potential whistleblowers they will be protected from retaliation is instead likely to evoke fear and make them less likely to report misconduct.

“When you start listing all the protections that you’re giving them you start raising their awareness of the risks and dangers,” said James Wainberg, Ph.D., a professor of accounting at FAU’s College of Business and co-author of the study with Stephen Perreault, Ph.D., assistant professor at Providence College School of Business. “It serves to raise their level of anxiety and has the opposite of its intended effect. All the protections are really a list of the things that can go wrong.”

It’s the first study to demonstrate that promoting explicit whistleblower protections can have the unintended consequence of actually inhibiting reporting of misconduct by intensifying the perceived risk of retaliation.

The researchers surveyed a group of students in a university graduate auditing course. The results suggest that explicitly raising the specter of retaliation, even to reassure potential whistleblowers they will be protected from it, increases perceptions of risk on average by about 25 percent over what it would be otherwise.

“That’s really counterintuitive,” said Wainberg, who’s also researching the impact of financial incentives for whistleblowers. “You really should be getting people to feel at ease and interested in calling.”

Whistleblowing has grown in recent years, thanks in large part to Congress’ enactment in 2002 of the Sarbanes-Oxley Act, which protects whistleblowers who report violations of securities laws, and the 2010 Dodd-Frank Wall Street Reform and Consumer Protection Act, which significantly increased the protections available to whistleblowers in the financial services industry.

A 2014 Global Fraud Study by the Association of Certified Fraud Examiners found that whistleblower tips are by far the most common fraud detection method, accounting for more than 42 percent of all cases. That’s more than twice the rate of any other detection method. The study also found that employees account for nearly half of all tips that led to the discovery of fraud.

The study was published in the current issue of the American Accounting Association journal Behavioral Research in Accounting. The results of Wainberg and Perreault’s work should encourage the corporate world to rethink the increasing use of explicit anti-retaliation reminders in reporting systems. Rather than describing explicit protections offered from retaliation, they wrote, organizations could instead more explicitly describe the organization’s commitment to good corporate governance and ethical behavior.

“There’s still a lot of research to be done in this area to look for what is really best practices in this regard,” Wainberg said. “Even though I’m all for these protections, listing all of them out may not be the best way to go.”