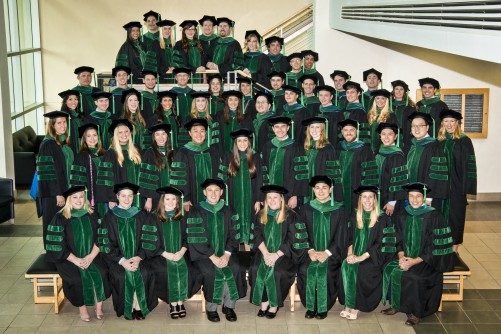 Newswise — The Charles E. Schmidt College of Medicine at Florida Atlantic University celebrated a long-anticipated event today with much fanfare as its inaugural class became the nation’s newest physicians. During the medical school’s first-ever commencement, family, friends, faculty and dignitaries bore witness to this historic event for the University and for Palm Beach County, as 53 members of the inaugural class received their Doctor of Medicine (M.D.) degrees.

“This is a landmark moment for Florida Atlantic University,” said FAU President John Kelly. “This first graduating class will excel in their careers in medicine and prove noble ambassadors for the university and the Charles E. Schmidt College of Medicine.”

Prior to the commencement ceremony, two of the inaugural class members participated in FAU’s first United States Air Force Commissioning and Pinning Ceremony for the medical school, marking their official appointments to the Reserve Corps of the U.S. Air Force.

“This is an exciting day for the Charles E. Schmidt College of Medicine,” said Kirch. “As the inaugural class, you have led the way for the students who will follow. You have developed student organizations, established relationships between the College of Medicine and your community, and were integral to the accreditation of this school. You should be so proud of everything you have accomplished.”

During the ceremony, Kelly presented the “President’s Distinguished Service Medallion” to Richard L. “Dick” Schmidt, FAU alumnus and benefactor, for his extraordinary service to his father’s namesake, the Charles E. Schmidt College of Medicine, and to the University.

“We are deeply indebted to the Schmidt Family Foundation and we can’t think of anyone more deserving than Dick Schmidt to receive the ‘President’s Distinguished Service Medallion’,” said David J. Bjorkman, M.D., M.S.P.H., dean and executive director of medical affairs, FAU’s Charles E. Schmidt College of Medicine. “We are especially proud that he is receiving this well-deserved recognition during our medical school’s finest hour.”

“The ‘hooding’ is an important rite of passage that formally acknowledges the achievements and accomplishments of our graduates,” said Markowitz. “We concluded the hooding ceremony with the graduating class reciting in unison the Hippocratic Oath to remind them of the high standards of performance and behavior that they should aspire and reach as they enter into their professional careers as physicians.”

Following graduation, FAU’s first medical school graduates will spend between three to seven years of their medical careers for the next phase of their training—the specialized program known as residency. On March 20, results from FAU’s first “Match Day,” observed at medical schools around the nation, revealed a 100 percent residency match for its student body. The students vied for extremely competitive positions that include neurosurgery, radiation oncology, radiology, emergency medicine, otolaryngology, obstetrics/gynecology, internal medicine, psychiatry, pathology, pediatrics, family medicine and anesthesiology.

FAU’s Charles E. Schmidt College of Medicine is the first and only medical school in Palm Beach County and was launched in 2010, when the Florida Board of Governors made a landmark decision authorizing FAU to award the M.D. degree. After receiving approval from the Florida legislature and the governor, it became the 134th allopathic medical school in North America and admitted its inaugural class in August 2011.

Florida Atlantic UniversityFlorida Atlantic University, established in 1961, officially opened its doors in 1964 as the fifth public university in Florida. Today, the University, with an annual economic impact of $6.3 billion, serves more than 30,000 undergraduate and graduate students at sites throughout its six-county service region in southeast Florida. FAU’s world-class teaching and research faculty serves students through 10 colleges: the Dorothy F. Schmidt College of Arts and Letters, the College of Business, the College for Design and Social Inquiry, the College of Education, the College of Engineering and Computer Science, the Graduate College, the Harriet L. Wilkes Honors College, the Charles E. Schmidt College of Medicine, the Christine E. Lynn College of Nursing and the Charles E. Schmidt College of Science. FAU is ranked as a High Research Activity institution by the Carnegie Foundation for the Advancement of Teaching. The University is placing special focus on the rapid development of critical areas that form the basis of its strategic plan: Healthy aging, biotech, coastal and marine issues, neuroscience, regenerative medicine, informatics, lifespan and the environment. These areas provide opportunities for faculty and students to build upon FAU’s existing strengths in research and scholarship. For more information, visit www.fau.edu.