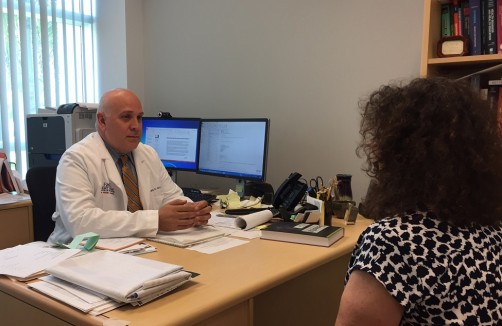 The South Florida clinical trial is directed by one of the worldâ€™s leading neuroscientists and an expert on LBD, James E. Galvin, M.D., M.P.H., a professor of clinical biomedical science in FAUâ€™s College of Medicine, a professor in FAUâ€™s Christine E. Lynn College of Nursing, and medical director of FAUâ€™s Louis and Anne Green Memory and Wellness Center.

Newswise — Florida Atlantic Universityâ€™s Charles E. Schmidt College of Medicine is spearheading the South Florida site for the first U.S. clinical trial for Lewy body dementia (LBD), the second-most common dementia after Alzheimerâ€™s disease. The HEADWAY-DLB is a phase 2b multi-center, double-blind, placebo-controlled study to evaluate an investigational medicine, RVT-101, for dementia with Lewy bodies. Currently, there are no medications available to specifically treat LBD, and patients are typically treated with medications for Alzheimerâ€™s.

The six-month study will enroll approximately 240 patients nationally to evaluate the safety and efficacy of RVT-101, a tablet that works by raising levels of acetylcholine, a vital chemical in the brain that helps with cognition and performing daily activities. Deficits in acetylcholine are a prominent feature of dementia with Lewy bodies. Because symptoms of LBD mimic other diseases like Parkinsonâ€™s and Alzheimerâ€™s, it is very difficult to diagnose often taking up to 18 months, with patients seeing a number of physicians over multiple visits. Patients, who are often misdiagnosed, are given medications for psychiatric disorders, Alzheimerâ€™s and Parkinsonâ€™s. The only way to confirm whether someone has LBD is with a post-mortem brain autopsy.

The late Robin Williams had this form of dementia as did legendary NHL coach Alger Joseph â€śRadarâ€ť Arbour, legendary radio personality Casey Kasem, and most recently, Hall of Famer Gerald Eugene â€śJerryâ€ť Sloane, former NBA player and head coach of the Utah Jazz. Dementia with Lewy bodies is a progressive type of dementia that affects more than 1 million people in the U.S. LBD is characterized by fluctuations in cognition, particularly in alertness and attention, and can make depression worse. Many LBD patients also have visual hallucinations and REM sleep behavior disorder. LBD is characterized by the buildup of abnormal protein clusters (known as â€śLewy bodiesâ€ť) within the brain.

The South Florida clinical trial is directed by one of the worldâ€™s leading neuroscientists and an expert on LBD, James E. Galvin, M.D., M.P.H., a professor of clinical biomedical science in FAUâ€™s College of Medicine, a professor in FAUâ€™s Christine E. Lynn College of Nursing, and medical director of FAUâ€™s Louis and Anne Green Memory and Wellness Center.

Galvin developed the â€śLewy Body Composite Risk Scoreâ€ť (LBCRS) to quickly and effectively diagnose LBD and Parkinsonâ€™s disease dementia (PDD) in about three minutes. The LBCRS is a brief rating scale that can be completed by a clinician to assess clinical signs and symptoms highly associated with the pathology of this disease.

â€śDiagnosing dementia with Lewy bodies early is critical, and with this important tool, a clinician can assess whether the patient has bradykinesia, rigidity, postural instability, or rest tremor without having to grade each extremity,â€ť said Galvin. â€śWe are hopeful that we also will be able to assist patients who have dementia with Lewy bodies with a medication that is designed to address their specific needs and condition.â€ť

Patients diagnosed with dementia with Lewy bodies can enroll in the HEADWAY-DLB study by contacting Katty Savaria, coordinator, at 561-356-4295.

About Florida Atlantic University:Florida Atlantic University, established in 1961, officially opened its doors in 1964 as the fifth public university in Florida. Today, the University, with an annual economic impact of $6.3 billion, serves more than 30,000 undergraduate and graduate students at sites throughout its six-county service region in southeast Florida. FAUâ€™s world-class teaching and research faculty serves students through 10 colleges: the Dorothy F. Schmidt College of Arts and Letters, the College of Business, the College for Design and Social Inquiry, the College of Education, the College of Engineering and Computer Science, the Graduate College, the Harriet L. Wilkes Honors College, the Charles E. Schmidt College of Medicine, the Christine E. Lynn College of Nursing and the Charles E. Schmidt College of Science. FAU is ranked as a High Research Activity institution by the Carnegie Foundation for the Advancement of Teaching. The University is placing special focus on the rapid development of critical areas that form the basis of its strategic plan: Healthy aging, biotech, coastal and marine issues, neuroscience, regenerative medicine, informatics, lifespan and the environment. These areas provide opportunities for faculty and students to build upon FAUâ€™s existing strengths in research and scholarship. For more information, visit www.fau.edu.