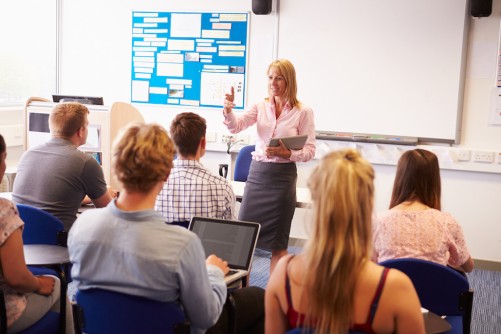 The study suggests that a masculine-gendered environment dominates colleges of business, leading to shifting standards when it comes to the highest senior appointments in academe. While the data was collected in business schools throughout the U.S., the researchers believe their results would be replicable in other academic settings and in other masculine-gendered environments.

Newswise — Female faculty members hoping to advance to the highest ranks of academia face significant barriers due to male-dominated environments at colleges and universities, according to a new study of faculty at colleges of business led by a professor at Florida Atlantic University’s College of Business.

“We looked at lifetime productivity and found irrefutable evidence that, in line with double-standards theory, women have to do a lot more work than men to get similar rewards,” said Len Treviño, professor of management in FAU’s College of Business. “It’s true there’s a double standard. We tested it.”

The study, published in the Journal of Management, suggests that a masculine-gendered environment dominates colleges of business, leading to shifting standards when it comes to the highest senior appointments in academe. While the data was collected in business schools throughout the United States, the researchers believe their results would be replicable in other academic settings and in other masculine-gendered environments, Treviño said.

Treviño and his fellow researchers Luis R. Gomez-Mejia at Arizona State University, David B. Balkin at the University of Colorado and Franklin G. Mixon Jr. at Columbus State University, analyzed appointments to the rank of named professorship by gender via a sample of 511 management faculty at top American research universities with 10 or more years of experience since receiving their Ph.D. They found that women are less likely to be awarded named professorships and that they derive lower returns from their scholarly achievements when it comes to appointments to endowed chairs.

“Some of the numbers are shocking,” Treviño said. “For management professors, and those in many other areas of study, it’s all about publications in top journals that allow you to advance to the upper echelons.”

The research seems to show it’s not a conscious decision to make things tougher for female faculty.

“It’s birds of a feather flock together,” he said. “Males at the top run the show and they interact with other male gatekeepers. The competence of female faculty is more likely to be questioned while male competence is taken for granted by the gatekeepers. Academic institutions, like some other businesses, were created by men and for men. Things are changing but they’re changing too slowly, in our estimation.”

The researchers conclude that women face biases that are so deeply embedded in the processes followed by leading academic institutions that they may not even be noticed until they are eradicated. Treviño hopes that this study will help increase awareness of the problem.

“There has to be a conscious decision that this is not right and we have to change it,” he said. “And you have to keep at it because people forget.”