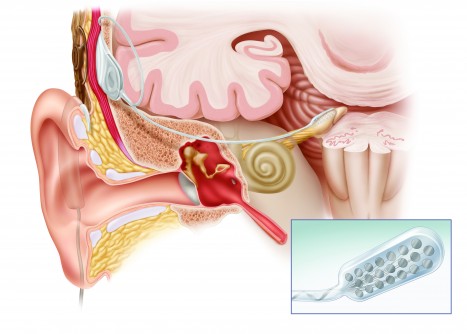 FDA Approves Clinical Trial of Auditory BrainstemImplant Procedure for Children in the U.S.

The ABI was developed at the House Research Institute and is the world’s first successful prosthetic hearing device to stimulate neurons directly at the human brainstem, bypassing the inner ear and hearing nerve entirely. Since the procedure began, more than 1,000 adults worldwide have received the ABI, with surgeons at the House Clinic leading the way.

“This will be the first FDA-approved trial of its kind, and represents a major step forward to bring a sense of hearing to deaf children in the U.S. who are born without a hearing nerve or cochlea (hearing organ) and therefore are unable to benefit from hearing aids or cochlear implants,” said Neil Segil, Ph.D, executive vice president for research, House Research Institute. “Since its development at the House Research Institute in 1979 by Drs. William House and William Hitselberger, the ABI has been successful in providing a sense of sound to many adults in the U.S., however it has never been approved by the FDA for treating deafness in children. This study has the potential to expand the use of this remarkable device, which represents the only effective sensory prosthetic for direct brain stimulation in use today.”

“We’re excited to have reached this milestone and look forward to being able to offer this amazing technology to children in the United States who currently have no other option for hearing rehabilitation,” said Eric Wilkinson, MD, co-principal investigator and lead physician for the clinical trial, House Research Institute, and associate, House Clinic.

"Children's Hospital Los Angeles is thrilled that the FDA has approved the Auditory Brainstem Implant clinical trial for children," says pediatric neurosurgeon Mark Krieger, MD, chief of Medical Staff, Children's Hospital Los Angeles. Krieger also holds a position as chief of the hospital’s Division of Pediatric Neurosurgery. "We are looking forward to offering this innovative procedure to provide sound to deaf children in the United States. This prosthetic device has shown great success in providing hearing to children and adults and we look forward to contributing to research on advancing the ABI and to the training of physicians on the surgical implantation techniques."

The clinical trial is part of a unique international consortium with the University of Verona for teaching and research to advance the use of the auditory brainstem implant (ABI) in children worldwide. The ABI is already a successful treatment with the pediatric population in Italy, and the goal of the partnership is to bring the hearing implants to deaf children in the United States.

To date, children who have been implanted with ABIs outside the U.S. have demonstrated potential to understand speech as well as to be mainstreamed in school. Currently, children in the United States who could benefit from an ABI must travel outside the U.S. to have the surgery. Several of the children implanted in Italy work with the audiology team at House Research Institute when they return to the United States.

“These children have never heard sound before, so their brains don’t know at first what to make of the neural signals coming in from the ABI,” said Robert V. Shannon, Ph.D., an investigator for the clinical trial, and director of HRI’s Koch Center for Hearing Restoration, who has been a leading scientist in the development of ABI device technology beginning with the first ABI for adults. “The pattern of information the ABI delivers to their brains is very different from the natural acoustic pattern. Yet their brain is eventually able to make sense of the information and many learn to speak and understand sounds. This demonstrates the amazing power of the brain to learn new patterns of information.”

The researchers anticipate securing final institutional approvals and funding commitments in the next several months, clearing the way for the study team to begin to evaluate patients for potential enrollment.

“The pediatric ABI clinical trial is yet another example of the House Research Institute’s leadership in developing new treatments for hearing loss and related disorders,” said James D. Boswell, CEO, House Research Institute. “We are grateful to the FDA and proud to be the sponsor of this clinical trial that will offer hope of hearing to children in the U.S. who cannot benefit from hearing aids or cochlear implants.”

About the House Research InstituteHouse Research Institute, formerly House Ear Institute, is a nonprofit 501(c)(3) organization dedicated to improving the quality of life for people with hearing loss and related disorders through scientific research, patient care, and the sharing of knowledge. Institute scientists research the auditory system, at the level of function, as well as at the cellular, molecular and genetic levels. We also explore the neurological interactions between the auditory system and brain, and study ways to improve auditory implants, diagnostics, clinical treatments and intervention methods. We share our knowledge with the scientific and medical communities as well as the general public through our education and outreach programs. For more information about the House Research Institute, please call (213) 353-7078; e-mail [email protected], visit www.houseresearch.org or follow us on Twitter, Facebook and YouTube.

About Children’s Hospital Los AngelesChildren's Hospital Los Angeles has been named the best children’s hospital in California and among the top five in the nation for clinical excellence with its selection to the prestigious US News & World Report Honor Roll. Children’s Hospital is home to The Saban Research Institute, one of the largest and most productive pediatric research facilities in the United States, is one of America's premier teaching hospitals and has been affiliated with the Keck School of Medicine of the University of Southern California since 1932. For more information, visit www.CHLA.org . Follow us on Twitter, Facebook, YouTube and LinkedIn , or visit our blog: www.WeAreChildrens.org.