Dana-Farber-led study of ramucirumab was key to approval 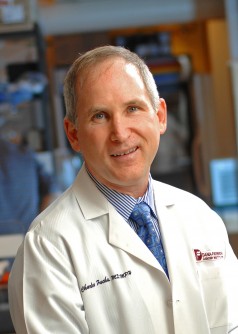 Newswise — BOSTON –– Based on results of a clinical trial led by Dana-Farber Cancer Institute scientists, the U.S. Food and Drug Administration (FDA) approved a molecularly targeted drug as second-line treatment in advanced stomach cancer that has progressed after standard chemotherapy has failed.

The FDA approval after a priority review was announced by the manufacturer, Lilly Oncology, of Indianapolis. A monoclonal antibody with the generic name ramucirumab, it will be sold under the name Cyramza, and is the first single-agent drug to be approved for advanced stomach cancer following chemotherapy.

An estimated 22,290 people will be diagnosed with stomach cancer in 2014, and 10,990 will die of the disease. Advanced stomach cancer is very aggressive and difficult to treat, and previously there were no FDA-approved treatments for it.

Charles Fuchs, MD, MPH, director of the Gastrointestinal Cancer Center at Dana-Farber, led a clinical trial called REGARD. Those results, reported in 2013, showed that patients who received ramucirumab had a significant improvement in their survival and a reduced rate of cancer progression compared to a placebo. The patients had advanced or metastatic gastric cancer – cancer of the stomach – or cancer at the junction of the esophagus with the upper part of the stomach. In these patients the disease had progressed despite initial chemotherapy with drugs such as docetaxel in combination with 5FU and cisplatin.

“For years we have looked for new and really effective drugs for stomach cancer,” said Fuchs, “We have relied on standard chemotherapies for a long time, and we’ve needed targeted agents based on the fundamental biology of stomach cancer.”

Ramucirumab is a monoclonal antibody drug that attacks the cancer by preventing it from developing new blood vessels to nourish its growth. Such drugs are known as anti-angiogenesis agents. Ramucirumab molecules latch onto the vascular endothelial growth factor (VEGF) receptor-2 on blood vessel cells, blocking them from receiving signals the cancer cells send in an effort to recruit new blood vessels. Anti-angiogenic treatments can shrink tumors by depriving them of oxygen and other nutrients.

“The benefit is modest, but it’s clearly better than what we were previously doing,” Fuchs explained. As in other diseases such as colon cancer, he added, new drugs provide incremental benefits “but when you chip away and develop drugs in sequence, ultimately you do have meaningful clinical improvements.”

Side effects were common and similar to those associated with the placebo, although more patients on ramucirumab had high blood pressure that was easily treated. Fuchs added, “It’s really impressive that an antibody which had very little side effects could provide a survival benefit.”

The drug’s effectiveness appears to be greater when combined with chemotherapy. A large randomized clinical trial called RAINBOW assessed a combination of ramucirumab and paclitaxel in patients with advanced cancer of the stomach or gastroesophageal junction. The study demonstrated that the combination prolonged overall survival from a median of 7.36 months to 9.63 months. The new approval of ramucirumab does not cover its use in combination therapy, but Lilly Oncology has said it will submit the RAINBOW data for an expanded approval.