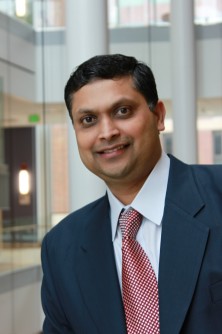 Joga Gobburu, PhD, MBA, FCP, a leading U.S. Food and Drug Administration (FDA) scientist for more than a decade, has joined the faculty of the University of Maryland School of Pharmacy,

Newswise — Joga Gobburu, PhD, MBA, FCP, a leading U.S. Food and Drug Administration (FDA) scientist for more than a decade, has joined the faculty of the University of Maryland School of Pharmacy, where he will establish a research and education program in the emerging field of pharmacometrics.

Pharmacometrics measures and evaluates existing information on a given drug, a disease, and experiments, including clinical trials, to lay the groundwork for strategic decisions on drug regulation and/or drug development.

The emerging field is cutting into an enormously expensive 98 percent failure rate of drug development experiments. “To learn from the failures, you must look at the failures and improve. It is the equivalent of business intelligence for R&D,” says Gobburu. “We can sometimes use these approaches to gain further insights into the clinical trials thereby alleviating the need for additional clinical trials. So it cuts down the number of clinical trials, making the approval faster and conducting smaller studies.”

“We are very excited to have the opportunity to expand our clinical science faculty and expertise,” saysMagaly Rodriguez de Bittner, PharmD, CDE, FAPhA, professor and chair of the department of Pharmacy Practice and Science. “Dr. Gobburu brings national and international recognition to the Department and the School of Pharmacy. In addition, with Dr. Gobburu’s joint appointment in the Department of Medicine at the School of Medicine we will have the opportunity to increase collaboration among the two departments.”

Gobburu joined the FDA in 1999 as a pharmacometrics reviewer, became team leader in 2005, and director in 2007. He was appointed senior biomedical research scientist at the FDA. Under his direction, a division of pharmacometrics was formed at the FDA and several policies were established. In that division, he established standardized disease databases.

Thomas Laughren, MD, director of FDA’s Division of Psychiatry Products, says, “We will miss him greatly. However, the standards he has implemented will continue, and I know he will make major contributions in his new roles at the University of Maryland.”

Gobburu is eager to stretch the already high standards of the graduates from the School of Pharmacy, which is one of the leading pharmacy schools in the United States. “There is a gap in academic institutions in [pharmacometrics],” he says. U.S. pharmacy school graduates today “do not understand drug development well. They know the theory of how to perform an analysis, how to interpret an experiment, write a report. But they do not know the business of drug development. To me, in order for a scientist to be influential, he or she should know the environment.”

Gobburu wants his graduates to know the principles of negotiations and leadership in the field. “I want to create the world’s most useful pharmacometrics and translational medicine program. I would like to produce scientific leaders in this field,” he says.

Ivan Nestorov, PhD, director of pharmacometrics at the pharmaceutical firm Biogen-Idec, says, “Within any scientific discipline, there are very few individuals who are capable of grasping, developing, and promoting both the fundamental methodology and its practical applications. Joga turned out to be one of those individuals in the discipline of pharmacometrics. With his bold concepts, deep insights, and unrelenting energy, he was able to win the recognition of the discipline in the regulatory world. Now, as an academic, he will undoubtedly bring a new impetus and novel directions to the development and implementation of the pharmacometric methodology and the training of professionals in the field.”

Gobburu obtained a BPharm and an MSc in chemistry from the Birla Institute of Technology and Science in Pilani, India, in 1992. He earned a PhD in pharmaceutical sciences from North Dakota State University in 1996 and completed two postdoctoral fellowships, one at the University at Buffalo, the State University of New York; and another at the Center for Drug Development Science, Georgetown University in Washington, D.C., and the FDA. Most recently, he received an MBA from Johns Hopkins University.

He has received numerous FDA awards such as the Outstanding Achievement Award. In 2008, he received the Outstanding Leadership Award from the American Conference on Pharmacometrics and the Tanabe’s Young Investigator Award from the American College of Clinical Pharmacology. Gobburu is on the editorial boards of the journal Clinical Pharmacology & Therapeutics and the Journal of Clinical Pharmacology. He has published more than 60 papers and book chapters, and has directed the doctoral research of two graduate students and mentored 16 postdoctoral fellows. He is a frequent speaker at national and international scientific conferences.

Although a young discipline, pharmacometrics has helped industry make the drug development decisions, and thus processes, more efficient. “We have put tools together because FDA has access to all the application data,” Gobburu says. “For example, we built a pharmacometrics disease model and published it in a peer reviewed journal so all the industry can now use that tool to guide their efforts. It’s a free service.”

He says he also was attracted to the University of Maryland School of Pharmacy because of the opportunity to train future leaders on pharmacometrics and translational medicine. He devoted himself to the discipline at FDA “because I believe in it. I saw value in it. And, I was lucky to get support for scientists there to work on it. But I was thinking ‘what if I did it full time?’. My goal is not only to create a program but to create an institute for translational medicine including experts from across the University and solve problems of mutual interest that can have a bearing on public health; how drugs are used in hospitals, and the way they are developed.”

“With Dr. Gobburu’s vast experience in clinical trial design, the School of Pharmacy is demonstrating its commitment to improving the drug development and regulation process,” says Natalie D. Eddington, PhD, FAAPS, FCP, professor and dean of the School of Pharmacy. “As a leader in the field of pharmacometrics, Dr. Gobburu’s expertise will enhance our educational and research programs and will lead to substantial partnerships with the pharmaceutical industry and other collaborators.”.