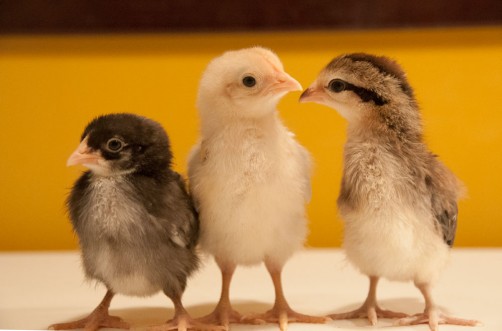 SIBLINGS FROM THE ADVANCED INTERCROSS F8 GENERATION BETWEEN RED JUNGLEFOWL AND WHITE LEGHORNS.

Newswise — Chickens that chicken out in unfamiliar surroundings may shed light on anxiety in humans, according to research published in the January issue of the journal GENETICS, a publication of the Genetics Society of America. Domestic chickens are much less anxious than their wild cousins, the red junglefowl. The new research identifies genes that contribute to this difference and reveals that several of the genes influence similar behaviors in mice. The authors argue that these results, combined with evidence from studies in humans, demonstrate the potential of the chicken to serve as a powerful model for understanding the genetic underpinnings of human behavior. “By necessity, human genetic studies of behavior often focus only on susceptibility to a mental health disorder. But what about more subtle differences in behavior? For example, what makes one person a little more anxious than others? And what makes someone else a little bolder?” said study leader Dominic Wright, of Linköping University in Sweden. “Animal models like the chicken allow us to address challenging questions like these using controlled breeding experiments.” But why choose the chicken as a model for anxiety? This approach takes advantage of a “natural” genetics experiment, the transformation of junglefowl in Asia into the modern domestic chicken. After thousands of years of breeding, the barnyard chicken has a different temperament to its jungle-dwelling counterpart: the chicken is more tame and less anxious. Anxiety behaviors in animals are typically measured by observing their activity in a brightly-lit, featureless space they have never encountered before (an “open field test”). In this new environment, junglefowl spend most of their time either frozen with fear or rapidly darting around. They also avoid the exposed center of the test arena. Domestic chickens, in contrast, traverse the whole area, and at a less erratic pace. The chicken genome also has properties that can make it easier to study than the human or mouse genomes. For example, chicken genes are grouped into much smaller linkage blocks than mammalian genomes are. These blocks are groups of neighbouring genes that tend to be inherited together in a chunk of chromosome, rather than being split up during the random shuffling of variants that occurs at each generation. Having smaller chunks allows researchers to more precisely pinpoint genome regions associated with a trait, such as anxiety behavior. To look for genes that contribute to variation in anxiety behaviors, the researchers first crossed White Leghorn chickens with red junglefowl to create a population of hybrids. The hybrid birds inherited a patchwork of gene variants from their chicken and junglefowl ancestors, and they also varied widely in their anxiety levels during the open field test. By comparing behavioral and genome data for each bird, the team identified fifteen regions of the genome that contributed to the behavioral variation. Each of these genome regions included many genes, so the next step was to hone in on specific genes of interest. The team narrowed the search by examining gene activity in the hypothalamus, a region of the brain involved in regulating anxiety. The researchers identified ten candidates for which heritable differences in hypothalamic gene activity were correlated with anxiety behaviors. Six of the ten candidate genes have known functions related to behavior or brain function. For example the gene ADAM10 is needed for proper formation of the brain during development and for protection against the brain amyloid plaques that form in certain neurodegenerative diseases. It also influences learning and memory. The researchers then tested whether these genes also influenced behavior in studies of mice and humans. The mouse data came from a massive breeding experiment called the Mouse Heterogeneous Stocks cross, which includes data from open field tests just like those used in the chicken study. Four genes identified in the chicken data were also associated with anxiety in the mouse, while three were associated with schizophrenia or bipolar disorder in large human genomic studies. Although anxiety behaviors were not directly measured in the human studies, the authors argue that results for other disorders may indirectly reveal links to anxiety. For instance, a large proportion of people with bipolar disorder have diagnosed anxiety disorders. Complex overlaps may also exist between schizophrenia symptoms and anxiety behaviors. “Though we can’t yet prove these genes have equivalent functions in chicken and humans, the data certainly raises the intriguing possibility that genes controlling variation in behavior can be remarkably conserved between a whole variety of species,” said Wright. “Understanding the genetics underlying the chicken results may provide fundamental insights into animal behavior, including normal behavioral variation in humans.”