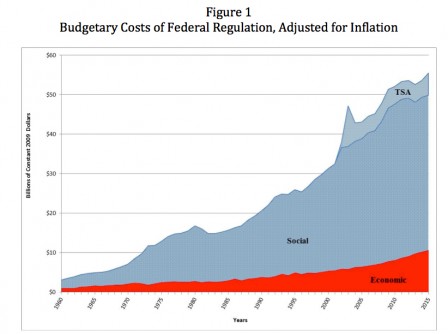 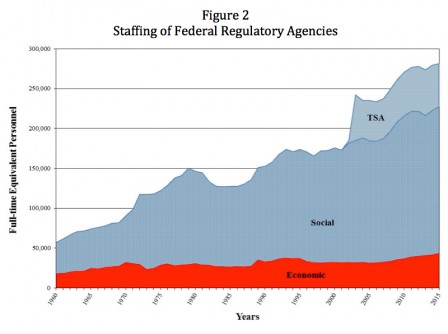 Newswise — While tight budgets are constraining regulatory spending at many federal agencies, those that garner funding from industry fees are using these revenue streams to fund substantial increases in regulatory programs and staffing, according to an annual report that examines the U.S. budget.

“The growth in spending and staffing in some agencies reflects not only the increased scope of their regulatory activities, but a greater ability to finance these activities from revenue sources that are less affected by Congressional spending limits, such as fees on the entities they regulate,” said study co-author Susan Dudley, director of the George Washington University Regulatory Studies Center.

“For example, while the Environmental Protection Agency’s outlays shrank by almost 4 percent in 2014, the Food and Drug Administration’s budget grew by more than 29 percent. The Consumer Financial Protection Bureau’s spending increased 33 percent in 2014 and outlays of both the Patent and Trademark Office and Securities and Exchange Commission grew by more than 10 percent,” she said.

Titled Economic Forms of Regulation on the Rise: An Analysis of the U.S. Budget for Fiscal Years 2014 and 2015, this year’s report confirms that regulatory spending and staffing are growing modestly for fiscal years 2014 and 2015.

“This year’s analysis also documents some interesting long-term shifts in regulatory spending, including a trend in which overall outlays devoted to economic regulatory activities, including price, quality, and entry regulation, are increasing at a faster rate than those aimed at social regulatory activities, such as environmental, safety and health issues,” said Melinda Warren, director of the Weidenbaum Center Forum and study co-author.

“This reverses a trend that began in the 1970s away from economic regulation of private-sector activities,” Warren said.

This trend is worth watching, researchers said, because economic theory and empirical evidence suggest that the costs of economic types of regulation often outweigh the benefits.

Additional highlights worth noting from this year’s report:

* President Obama’s FY 2015 Budget requests a real increase of 3.5 percent in outlays for agencies that regulate private sector activities, which would bring their budgets to $60.9 billion.

* Financial regulatory agencies are slated for growth in the new budget, including the Consumer Financial Protection Bureau, which added 462 new employees in 2014 and is slated to hire 172 in 2015; the Securities and Exchange Commission, which grew by 198 FTEs in 2014 and is budgeted for 464 more employees in 2015; and the Commodity Futures Trading Commission which would add 254 new employees after a slight staff reduction in 2014.

* The Patent and Trademark Office, which added 1,122 employees in 2014, continues to grow, with an additional 978 employees projected under the President’s Budget.

* Customs & Border Protection, which added 1,338 people in 2014 and is budgeted for another 1,510 in 2015, will soon have a full time staff that exceeds that of the Transportation Security Administration.

The full report is available online at wc.wustl.edu and regulatorystudies.gwu.edu.

The Weidenbaum Center on the Economy, Government and Public Policy at Washington University in St. Louis supports scholarly research, public affairs programs and other activities in the fields of economics, government and public policy, serving as a bridge between scholars and policy makers.

The George Washington University Regulatory Studies Center in the Trachtenberg School of Public Policy and Public Administration raises awareness of regulations’ effects to improve regulatory policy through research, education and outreach. It is a leading source for applied scholarship on regulatory issues, and a training ground for current and future policy officials who want to understand the effects of regulation and ensure that regulatory policies serve the public interest. 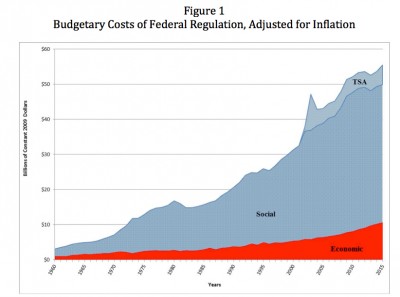 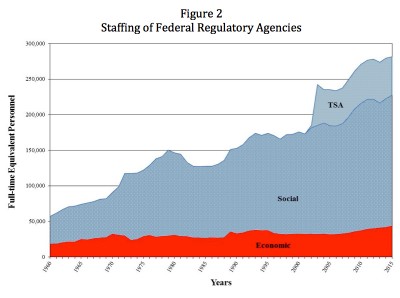